The late Dave Cannavo was a pioneer when it came to importing Eastern Bloc aircraft, having success in this endeavor even before the Iron Curtain fell. Over the years, we have mentioned Dave’s name in several issues of Warbird Digest magazine, but we’ve never shared the back-story surrounding his check rides in the MiG-21 and MiG-23 – details of which he shared with the author on March 9, 2014.

As an example of Dave’s aviation exploits in Eastern Europe, one of his first deals involved trading a Douglas DC-3 to an aviation museum in Prague, Czechoslovakia for three of their L-29s and a MiG-21. How Dave acquired, modified, and flew the DC-3 – non-stop – from St. John’s, Newfoundland in Canada to Prague, in what was then Czechoslovakia, is a story in and of itself. It involved a 16-hour flight with “…1,200 gallons in the cabin and 800 gallons in the wings!”

But I digress – back to Dave and his first MiG flights! It was a chilly, late-winter morning, and we were sitting together in Dave’s hangar at New Castle County Airport near Wilmington, Delaware. He leaned back in an old office chair and began recounting his story about traveling to Czechoslovakia to check out in the MiG-21. “Back in 1991,” he said, “I had the MiG-21 here and at that time you could buy backseat time in a Czech MiG-21PF, and the FAA said they’d give me a practice LOA [Letter of Authorization] if I took that path. So, I went over there, and they told me I’d have to fly the L-39 first… I told them I’d been flying an L-29, but I could see that civilian L-39s were on the horizon, so I flew it too. With my Czech instructor… we went around the pattern once or twice, and he said, ‘Ah you can fly airplane lets go out to do aerobatics.’ We went through a whole routine and found the Czechs to be pretty good pilots.” (I must note here that every time Dave quoted his Czech hosts, he did so with a heavy, Russian-sounding accent… so try to imagine that as we move forward here.)

“So, the next day,” Dave continued, “We went out in the -21 [but] he would not let me fly up front, so I got in back… The -21’s backseat is pretty vision restricted, but that did not bother me. We did a touch and go, and he said, ‘Ah, you can fly. No problem, vee vill sign paperwork. Let’s go do some air verk.’, which I thought meant more aerobatics. No! We are over the center of Prague at 300 feet! I’m flying so I said I was going to do some steep turns and I roll into a 50-degree bank or so and go around a couple of times. He said, ‘No no no, let me show you a steep turn!’ I said, ‘Your airplane.’ He rolled into a 90-degree bank and pulled into a 4G turn and goes around a couple of times. Then he plugged in the burner and pulls harder! Like 7Gs. That thing was flying on raw power. It was great! We were 300 feet over downtown Prague doing circles around a church – I wish I had a camera!”

Over the next several years, Dave imported scores of L-29s and L-39s, plus a few MiG-21s. In 1996, his Czech contact told him that the Czech Republic’s Air Force was phasing out the MiG-23 and that a few examples were up for sale. Like a number of other enterprising Americans, Dave Cannavo and his long-time friend, Joe Gano, envisioned flying these aircraft on government contracts – so he and Joe made a deal with two other gentlemen and bought a pair of MiG-23s (nicknamed Flogger in NATO parlance). After the arduous, two-year process of declassifying the maintenance manuals through the Freedom of Information Act and, aided by the late-Senator William Roth (R- Delaware), Dave finally got the Floggers ready to fly – but again, he needed a check ride. However, to pass this hurdle, he had to travel all the way to Moscow, Russia!

“I met the pilot,” Dave recounted, “who I believe was very timid around the airplane. We taxied out, and again I’m in the back, and he said, ‘You do the first takeoff.’ So off we go around the pattern and coming down on final he said, ‘310 kilometers. 310 kilometers! If we go slower, we have a serious problem!’ So, I take off and come around, and naturally, it’s hard to see from that backseat and I’m right at 310 and he started yelling, ‘310! 310! Must go faster!’ I told him I was showing 310, but he was getting 305 upfront so I pushed up the power. He was happy with that and the second one, so he said, ‘Okay, you can fly an airplane. You want to go supersonic ride?’ I said, ‘Yeah sure!’ He said something in Russian on the radio and made a max afterburner take-off and went straight up to 35,000! Right over Moscow! I was looking down on the Kremlin when we hit 1.3 Mach! – Right over Moscow! – That was the first time I’d ever been supersonic. We came back in and landed, I paid them, and they signed the papers.”

It’s hard to imagine such a check ride taking place over any American city – let alone the nation’s capital – but that’s what it was like in the wild early days following the collapse of the old Soviet Union. However, despite Dave Cannavo’s success in obtaining a MiG-23 check ride, the roster of US-based civilian pilots qualified to fly the MiG-23 has never exceeded what could be counted on one hand. Indeed, at the time of my 2014 interview with Cannavo, he was both the first and only Flogger-rated pilot in the U.S. The adventures he experienced in earning his ratings just after the fall of the Iron Curtain are almost worthy of an Ian Fleming novel!

Sadly Dave passed away in 2018; his death left a huge hole in the aviation community. Presently, the only American licensed to fly Floggers is Dan Filer.

Be sure to check out issue #93 of Warbird Digest Magazine, which includes a marvelous story by Gary Daniels featuring Dan Filer and his MiG-23! 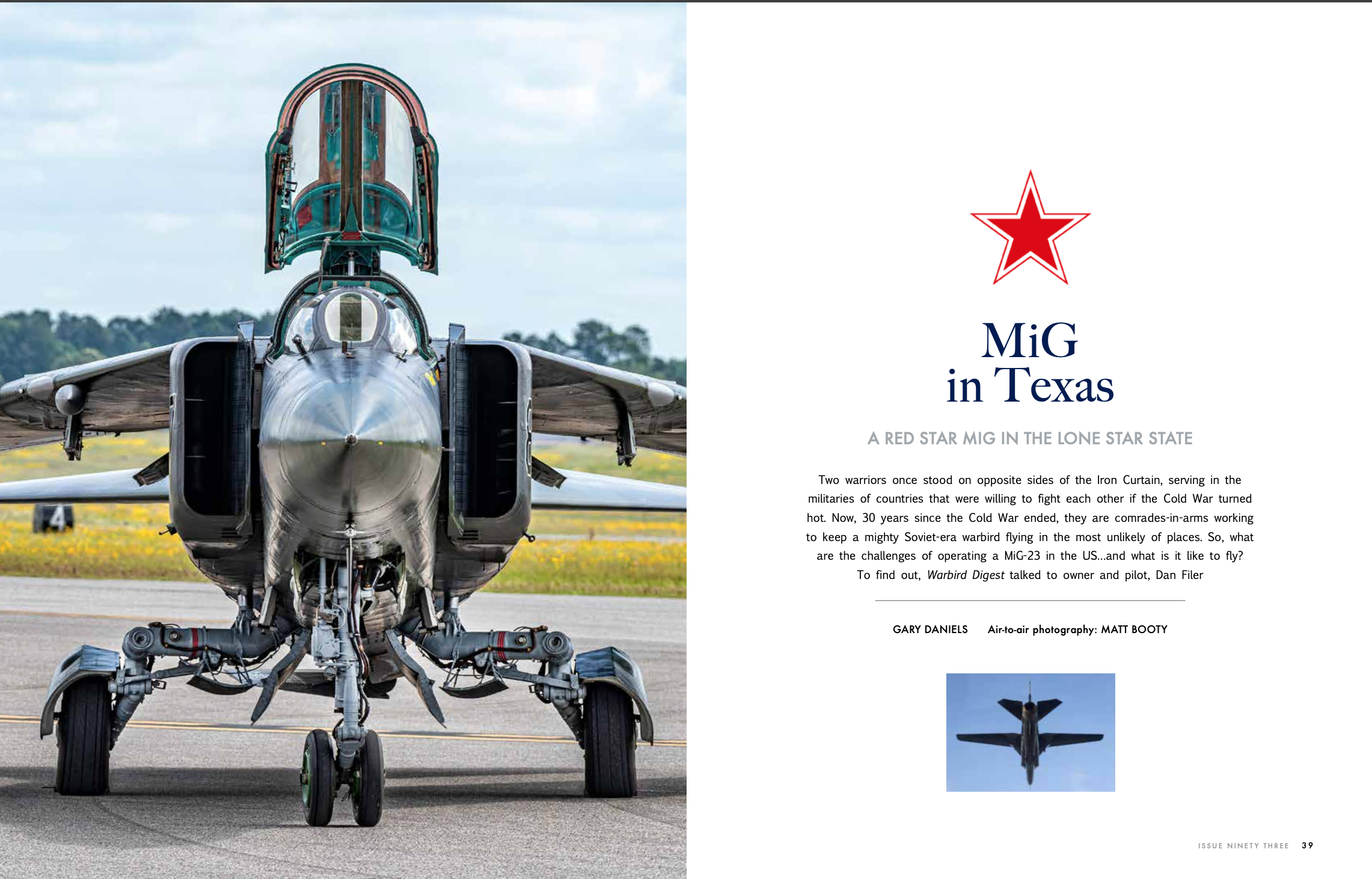