Back in March this year, we ran a story announcing that the Commemorative Air Force (CAF) had just completed the refurbishing of their unique Bell P-63F Kingcobra (43-11719). They repainted the fighter back into the original livery she wore while serving as a flight test vehicle with the N.A.C.A. during the latter stages of WWII. The CAF selected John Mosley’s facility, John’s 360° Coatings, in Clinton, Mississippi to carry out the exacting task of both replicating her wartime paint scheme and ensuring that the airframe structure was as well-shielded from the elements as possible. Having the work performed at this particular shop was a carefully considered choice. John’s 360˚ Coatings is not just a high end paint shop – they also produce their own unique brand of surface products specifically designed to preserve the structure they cover, while also enhancing an aircraft’s aesthetic appearance with a long-lasting and easy to maintain finish. These products have gained well-deserved traction in the vintage aviation community, and we are also pleased to have the company as a sponsor. For those of you having the need to repaint your high performance aircraft, boat or automobile, we thought you might be interested to hear more about one of the signature products at John’s 360˚ Coatings…

John’s 360º Coatings Avenger is a two-part ceramic coating formulated using nanotechnology. This product produces a molecular bond with the surface it is applied to for ultimate protection. The Avenger becomes part of the plane, and leaves the finish glossy, sleek and protected from the elements for years.

Aircraft owners know that maintaining aircraft typically means investing thousands of dollars in polish and hours physically polishing each aircraft every 6 months to a year. The problem with that isn’t just the cost or time—it’s the fact that each time a plane is polished, it is being deteriorated. Polishing removes weathered metal leaving behind a shiny polished look — this comes at a cost though, diminishing the aircraft’s structural integrity over time. However, using John’s 360˚ Coatings Avenger means more flights, less man hours and less maintenance. An absolutely priceless return on investment.

Scott Glover, owner of Mid America Flight Museum is convinced of the product’s efficacy stating, “John’s products are preserving aviation history. Planes that would normally be destroyed, will be around for generations to fly— thanks to John’s products. There really is nothing like The Avenger on the market. It is miraculous. Nothing compares.”— 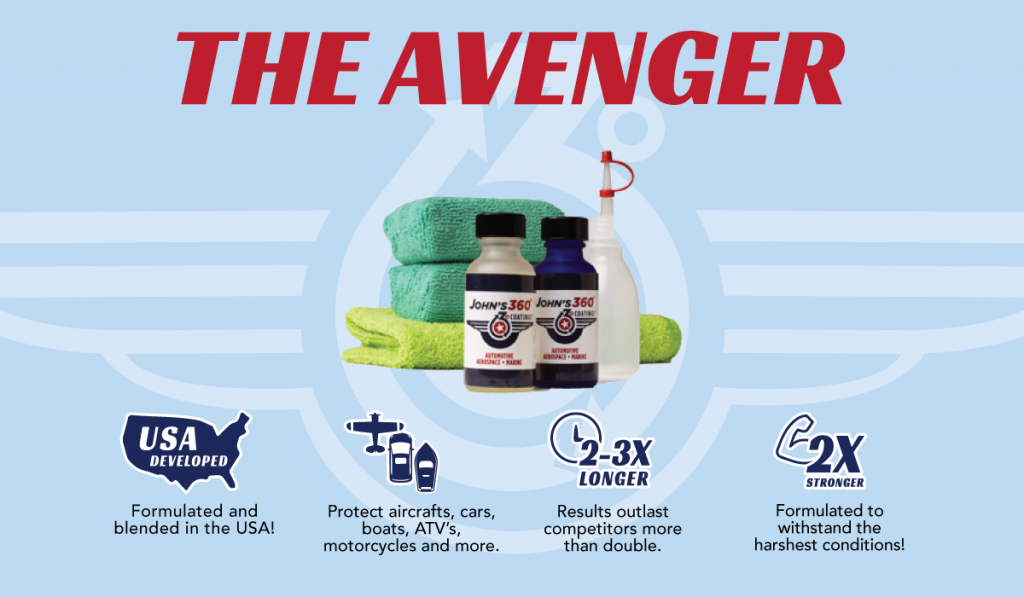 John’s 360˚ Coatings protect and preserve automotive, marine and aircraft vehicles with premium detailing products and the strongest, longest-lasting ceramic coating on the market. Learn more at www.johns360coatings.com and save 10% off your order when you use code WD10*.*excluding bundles