As often does, Colonel Scrappy Johnson sends me emails about facts or anecdotes of his aviation career.The one i received few days ago it’s one of the coolest.

Scrappy recalls: “When we had our Red River Valley Fighter Pilots/Tactics Meeting at Korat in 1967. During the tactics meeting which only lasted about an hour because we were eager to get on with the party, Robin Olds penned the attached cartoon. It’s obvious that he had a talent in that direction plus his others.”

“The Spook”, which was created by McDonnell Douglas technical artist, Anthony “Tony” Wong, for shoulder patches. The name “Spook” was coined by the crews of either the 12th Tactical Fighter Wing or the 4453rd Combat Crew Training Wing at MacDill AFB. The figure is ubiquitous, appearing on every imaginable item associated with the F-4. The Spook has followed the Phantom around the world adopting local fashions; for example, the British adaptation of the U.S. “Phantom Man”is a Spook that sometimes wears a bowler hat and smokes a pipe.

Brigadier General Robin Olds was a noted American flying ace during World War II and the Vietnam War. Robin Olds was credited with twelve kills over Europe. Robin Olds grew up amongst military aviators and aircraft — his father was a World War I pursuit pilot, an aide to Brig. Gen. Billy Mitchell, and commander of the first B-17 squadron. Robin Olds attended West Point, where his characteristic boldness allowed him to excel on the football field — in 1942, he was selected as an All-American tackle. After Olds graduated in 1943, he attended flight training and went to Europe as a P-38 pilot. 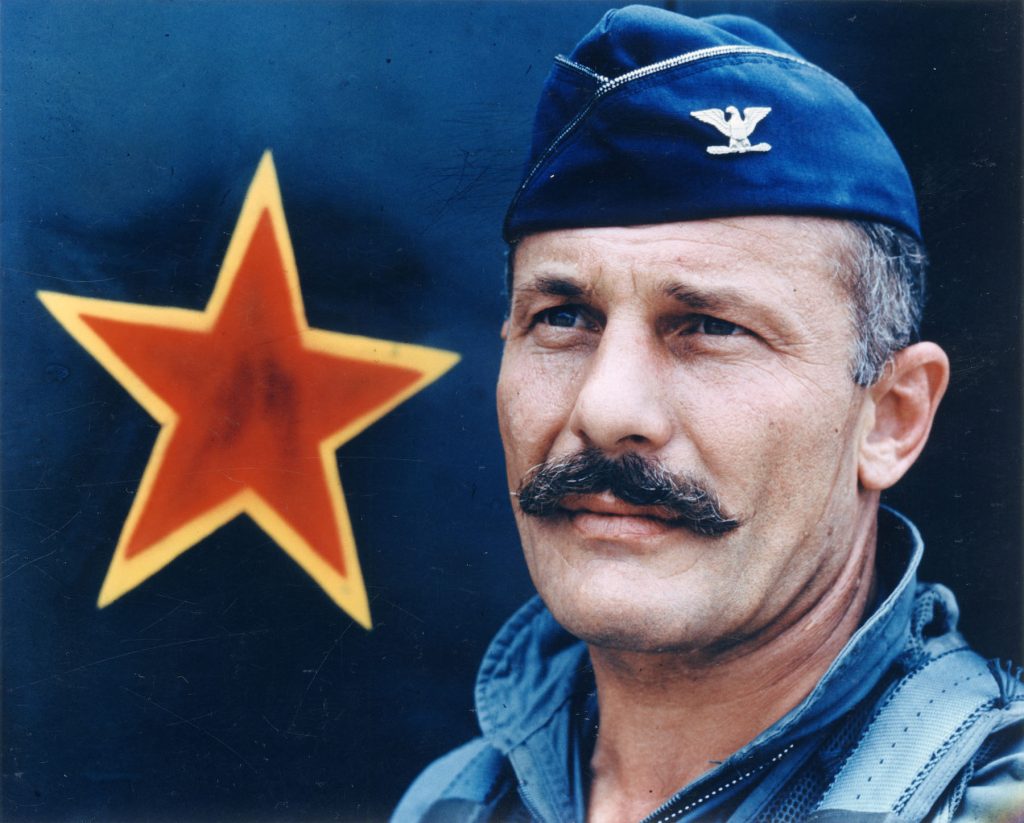 Olds stood out as a daring pilot and a natural leader. Within a few months, he shot down five enemy fighters to become the 479th Fighter Group’s first ace. At the very young age of 22, he was promoted to major and given command of the 434th Fighter Squadron. Olds continued his success after the unit converted to P-51s, and he ended the war with 12 victories.

Following World War II, Olds flew in the first P-80 jet demonstration team, followed by command of several operational units, and then staff jobs. Unable to get a combat posting during the Korean War, Olds became determined to get into combat when the Southeast Asia War escalated.

In the fall of 1966, Olds took command of the 8th Tactical Fighter Wing (TFW) at Ubon Royal Thai Air Force Base. Olds’ charisma and courage endeared him to his people, and under his leadership, the “Wolfpack” became the USAF’s top MiG-killing wing in Southeast Asia. Olds also played a key role in the creation of the Red River Valley Fighter Pilots Association, which improved coordination between USAF wings in Southeast Asia and became a lasting fraternal organization.

Olds led from the front — he shared the same risks as his aircrews by flying on the most dangerous missions. He received many decorations for his audacity in combat, including the Air Force Cross for a mission in August 1967, when he led a strike force against the heavily-defended Paul Doumer Bridge in North Vietnam.

The crowning achievement for Olds was planning and leading OPERATION BOLO, when North Vietnamese MiG-21 pilots were tricked into an air battle at a disadvantage. Olds shot down a MiG-21, and his 8th TFW F-4 aircrews shot down six others with no losses. He also shot down three other MiGs during his tour. When added to his WWII victories, his lifetime victory totaled 16 enemy aircraft.

Olds returned from Southeast Asia in December 1967. Promoted to brigadier general in 1968, he became the commandant of cadets at the U.S. Air Force Academy, and he retired from active duty in 1973. ( Source National Museum Of The Air Force)