One of the things that struck me as we were putting this issue together is the incredible resurgence of flying Hawker Hurricanes that we have witnessed in recent history. I distinctly recall seeing my very first flying Hurricane at Oshkosh back in 1990 when EAA celebrated the 50th anniversary of the Battle of Britain. I believe that at the time the only Hurricanes flying on this side of the pond were the Canadian Warplane Heritage Museum example (later lost in its hangar fire) and Neil Rose’s example that attended the event. Off the top of my head, I can think of only two others that were operational as part of the Battle of Britain Memorial Flight in the United Kingdom. More recently, I was able to see seven flying together at a 2019 Shuttleworth Collection airshow. How far we have come…

In this issue, we feature the Dakota Territory Air Museum’s Hurricane, which recently returned to flight after a lengthy restoration following a hurricane that devastated the collection of its previous caretaker. The Hurricane is finished in the colors of L.C. Wade, and we also take a look at the life of this rather unknown fighter ace. I hope that you are enjoying our new approach of pairing the history of a particular aircraft with an in-depth history of the individual the aircraft honors. We feel it combines our love of the aircraft themselves with a desire to remember those who went to battle in them.

Just as we were going to press, we learned of the untimely death of noted aviation photographer Eric Dumigan. When I started the magazine back in 2004, Eric was a significant contributor and one of our staff photographers. Over the years he began to produce more content for other magazines, and it was only recently that we began working together again. Eric was not only a very talented photographer but a personal friend to a number of the staff members here at Warbird Digest. We mourn the loss and recognize that we have lost one of the true greats. We will remember our interactions with Eric fondly.

Flight Log -UPDATES FROM AROUND THE WORLD – The latest in warbird news, including a joint Lancaster agreement.

Navigator – WHERE TO GO, WHAT TO SEE – Detroit: The city that brought you the Motown sound and mass-production of the automobile offers a host of aviation attractions of interest to warbird enthusiasts.

In Focus – A DAY IN THE LIFE OF ARCO – Warbird Digest takes you behind the scenes at the Aircraft Restoration Company at Duxford, UK.

Products – WHAT TO BUY AND WHERE – “What’s New” in the world’s marketplace for the discerning warbird memorabilia collector.

MIG IN TEXAS – Warbird Digest takes you for a ride in the fire-breathing, swing-wing, supersonic MiG-23 “Flogger.”

Tailspin – “MAGNIFICENT MIG” – Will Ward, a devout proponent of the MiG-23, waxes lyrical about its capabilities and dispels many of the misconceptions unfairly attached to it.

TRUE BLUE – The full-circle story of a once-forlorn Spitfire and its meant-to-be custodian.

L.C. WADE – The “Forgotten Ace.” This Texan went to war in the Hawker Hurricane, becoming an RAF ace in North Africa and the Mediterranean.

Click on the image below to purchase this issue in print or digital. 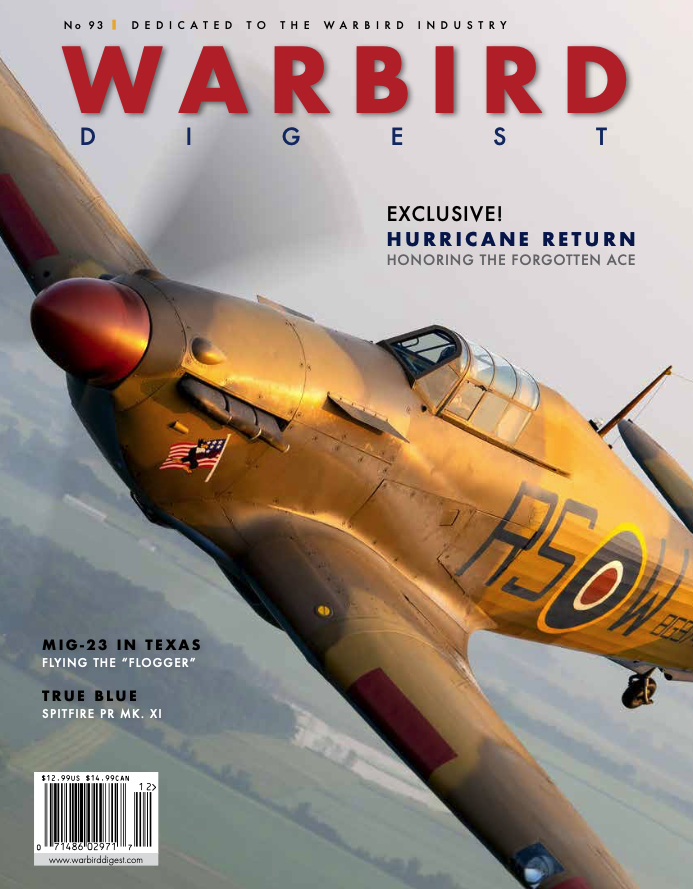