Edited from an article by Travis Kircher for GlobalAir

Glyn Powell has a special talent. He has the ability to raise the dead. Not people, mind you, but rather aircraft…. and more specifically, the de Havilland Mosquito, one of the most versatile and effective medium fighter bombers of WWII. Constructed primarily of wood, and powered by a brace of Rolls-Royce Merlins, the Mosquito was fast and packed a punch. It was manufactured on production lines in three countries (England, Canada and Australia) and served in every combat theater during WWII.

Though produced en masse, its wooden construction did not lend itself to longevity, and only a handful of original Mosquitoes still exist which are largely free of rot, and by the turn of the millennium, it was doubtful that any Mosquito would ever fly again.

That is until Glyn Powell took up the challenge….

Theo Botha, general manager of Mosquito Aircraft Restorations in Ardmore, New Zealand, has two words to describe Glyn Powell: humble and pragmatic. “He’s exactly the kind of guy you really wouldn’t expect to want to rebuild one of the most technically complex non-jet aircraft in history in what is – what was – his garden,” Botha said.

And yet that’s exactly what happened. The New Zealand-based pilot fell in with a group of aviation enthusiasts with a shared vision; they wanted to rebuild a flyable Mosquito.

“Everyone talks about Spitfires because they’re flying,” Botha said. “You can see them. ‘What’s that?’ ‘Oh, it’s a Spitfire! It’s cool! It makes a loud noise!’ ‘Great! They won the war!’ ‘Oh, brilliant!’ But actually, the Mosquito played a very important role as well – extremely important – but because the airframes are made of wood, none of them are around. So they’re less in people’s minds. Glyn wanted to fix that.”

By 1989, most of the group had given up, but Powell had caught the vision and he wasn’t letting go. He purchased the remains of Mosquito T.43 NZ2308 and began the work of restoring it. That included securing 8,000 drawings on microfilm from the Smithsonian Institute, as well as traveling the world to examine preserved Mosquitos in detail. He also became a fervent collector of Mosquito parts.

“He’s not a CEO-type character – a bull-type character – where the only way to get him to do something is to set him a challenge,” Botha said. “He’s more someone who decides what he wants to do and is just gonna get on and do it. I supposed there’s no ego attached. It’s not a question of, ‘You say I can’t do it, so I will.’ It’s more a question of, ‘I’m gonna do it because it’s what I want to do.’”

“So what kind of guy is he?” Botha asks. “The kind of guy who just humbly shows you what he’s done, and the only thing you can think of to say is, ‘How can I help?’ He’s that kind of guy.” 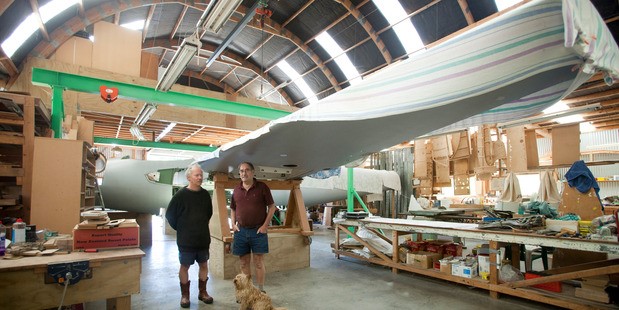 Restoring a flyable Mosquito is a task that took Powell decades. “I really don’t think they had any idea how hard it was to do,” Botha said of Powell and his team. “Because there’s almost a fractal level of detail with this. I don’t know if you’ve ever tried to make an Airfix model or something like that – those little five-minute jobs that end up taking you the best part of a week. The Mosquito is that to the nth degree.”

Glyn Powell and his team were faced with the obstacle of building a flyable Mosquito from an  incomplete set of drawings, assembled from parts – many of which were missing – in a manner that was both functional and historically accurate.

“At the time this was made, they were pumping these out like a Model T Ford,” Botha said. “But what we’re talking about is making one Model T Ford from scratch in your garage, from drawings. It’s mindboggling.”

By far, one of the most difficult aspects of the aircraft’s construction is its wooden frame. Made of a combination of plywood and balsa wood, the frame would require the construction of two molds, composed of douglas fir and cedar wood. Botha says that wasn’t an easy task at a time when – aside from the construction of high-end furniture and musical instruments – the craft of woodworking is dying. Much thanks, he said, goes to the professionals at Avspecs Ltd., also located in Ardmore, New Zealand, for their workmanship in forming the fuselage in a manner that reflected the original design.

That said, in some rare instances, Botha says modern materials were substituted when using the originals simply wasn’t practical for the overall longevity of the aircraft.

“There are substantive differences,” he admitted. “Some materials which were used are no longer commercially available, so some materials had to be substituted in. But also, more importantly, the modern adhesives are much more resistant to moisture,” he added.

The original design called for 1940’s technology organic casein or urea formaldehyde glue. Powell and his team used a modern epoxy instead, which is far more effective and long-lasting.

“Moisture and humidity is a Mosquito’s worst enemy,” Botha said. “If you want it to last forever, you want to control its storage environment – the humidity. And the adhesive’s ability to be resistant to moisture is very important. So epoxies are used for the adhesive.”

Botha says Powell and his team had a much more difficult time building a handful of flying Mosquitos than the original manufacturers did. “At the time this plane was built, it was a really serious industrial job,” he said. “Thousands and thousands and thousands of people at hundreds of companies working together. So when Glyn started from scratch with just the drawings of the Mosquito, and not having the mammoth industrial supply chain – to have one organization making spars, one making ailerons, etc. – to do that with a small team is unfathomably audacious.”

According to Botha, part of Powell’s success stems from the creativity and tenacity of the people working under him. “They live and breathe small engineering activities,” he said. “They’re humble people, and they’re not earning a fortune from this. One of the key men who works there, his hobby is making fully-functional, handheld-sized petrol engines,” he said. “So he’ll make you a V-12 you can hold in your hand. He makes those at home.”

Botha said he first visited Powell’s workshop years ago on the advice of a friend – and he immediately fell in love with the Mosquito. “It’s hard not to,” he said. “If you pick up any part – any component or subcomponent – it’s just mind-blowing, the level of detail, within the detail, within the detail. And then the craft, which stems from figuring out how to interpret the drawings through to actually fabricating parts using the appropriate techniques and really making a job of every last piece…

“These days you could, using computer-aided design, CNC-machine all these parts and do all of it a lot easier, but they’re not doing it that way,” he added. “This is craft and advanced engineering and woodwork by hand, but up to the standards of CNC machining. It’s mind-blowing.” 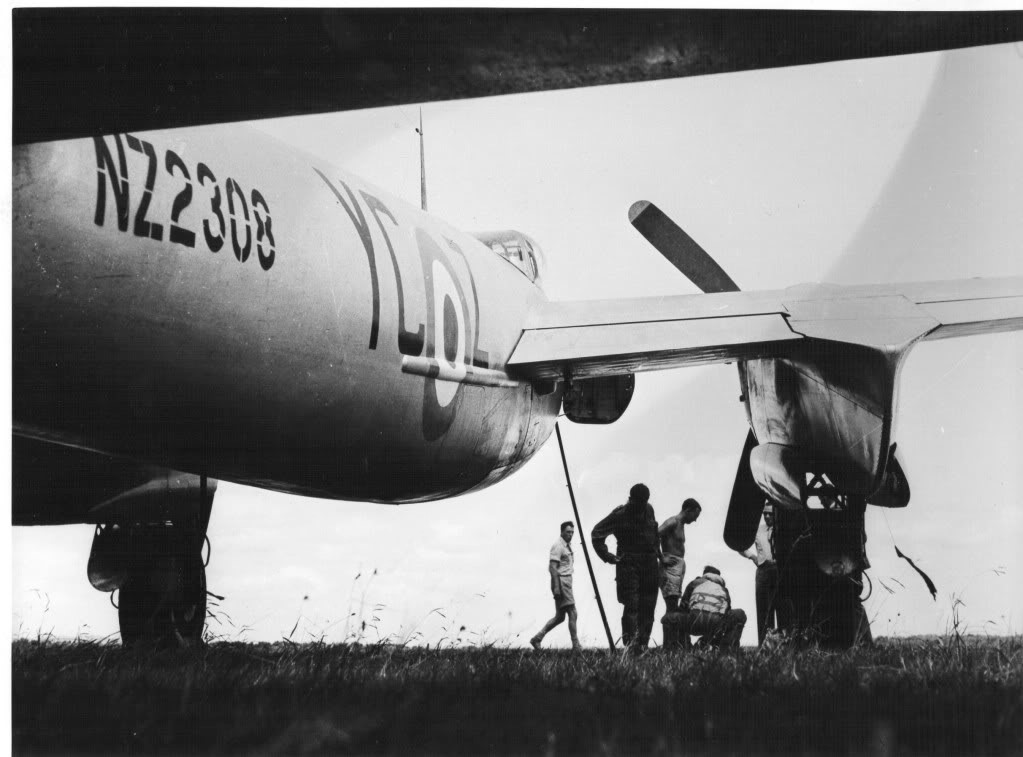 The first fully-restored, fully-functional Mosquito, Jerry Yagen’s FB.26 KA114, thrilled audiences when it made its first post-restoration flight in September, 2012. It went on to receive the award for Grand Champion Warbird at the EAA AirVenture Oshkosh 2015.

To date, three Mosquitos have been reconstructed and are now flyable. A fourth – Powell’s original plane, NZ2308 – is in the process of being restored, as financing permits. Botha said Powell hopes to find the financing to finish the project, and a buyer to give the aircraft a good home.

“The reason Glyn started this was not because he wanted to sell one, or because he wanted to build one. He wanted to fly one,” Botha said. “And he wanted to keep the memory of this thing alive. And when he was finished flying it, his ambition was to have it sent straight back to the UK, where it could be an important part of the flying military history over there.”

Currently, Powell is working with the Mosquito Pathfinder Trust, an organization raising funds to finish the restoration project and have the aircraft sent to the UK.

Botha said that, of the available Mosquitos, this is the prize. “This is the one that started it all,” he said. “It is constructed from the pick of the available components by the guy who was sourcing them, as his personal aircraft.”

As time passes, Botha says the value of NZ2308 only increases, given the fact that it will become increasingly difficult to find the necessary skills and components to build another Mosquito.

“This is a once-in-a-lifetime opportunity,” he said. “The cost of restoring a Mosquito is extraordinarily high, but if you had to make new metal parts from scratch, the cost would double. So the possibility of having authentic restored mosquitos is going away. Estimates vary, but two-to-three more will be the maximum. This is going to be the most special one.”

But the biggest advantage of this particular Mosquito, according to Botha, is the dual-control system, which means the plane can be flown from either the right or left seat. “If I can afford it, I’d buy this, and I’d have one of a very, very, very small handful of pilots take me up in it and have some very safe fun in it. I think it’s a no-brainer,” he added wistfully.

This article was provided by Globalair. GlobalAir.com is the premier marketplace for those looking to buy or sell aircraft. With our innovative listing engine, you will always be up to date with the most recent aircraft for sale listings from around the world.