On October 24, 2003, at 4:05 p.m. BST, the final commercial flight of the British Airways Concorde came to an end with the landing of G-BOAG at London Heathrow Airport. It landed third in sequence with G-BOAE and G-BOAF after all three supersonic airliners had made a low pass over London. G-BOAG had flown from New York under the command of Captain Mike Bannister, with First Officer Jonathan Napier and Engineer Officer David Hoyle. There were 100 celebrity passengers on board. 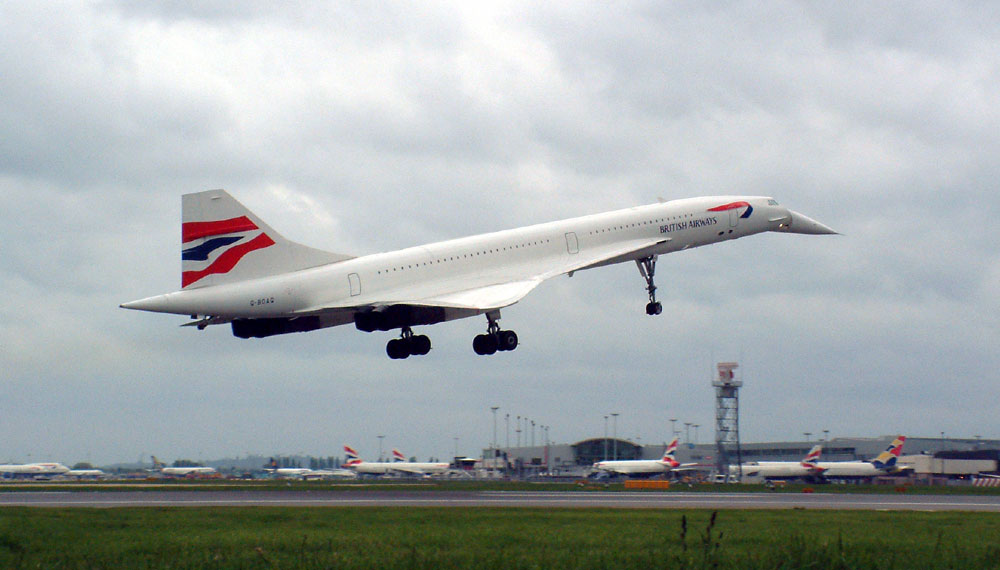 British Airways Concorde made just under 50,000 flights and flew more than 2.5m passengers supersonically. With a take-off speed of 220 knots (250mph) and a cruising speed of 1350mph – more than twice the speed of sound – a typical London to New York crossing would take a little less than three and a half hours as opposed to about eight hours for a subsonic flight. In November 1986 a British Airways Concorde flew around the world, covering 28,238 miles in 29 hours, and 59 minutes.

“Alpha Golf,” British Aerospace serial number 100-214, was the final Concorde built in Britain, and, at its retirement, was the lowest-time Concorde in British Airway’s fleet. It first flew at Filton, 21 April 1978, registered G-BFKW. It was delivered to British Airways on February 6, 1980. In 1981, 100-214 was re-registered as G-BOAG. During the early 1980s, it was taken out of service and used as a source for parts for the other Concordes, but returned to airworthy status in 1985.

After a series of farewell flights, G-BOAG was retired to The Museum of Flight, Seattle, Washington. It had flown 16,239 hours, made 5,066 takeoffs and landings, and gone supersonic 5,633 times. On October 24, 2003, British Airways withdrew Concorde, bringing to a close the world’s only supersonic passenger service. BA’s fleet of seven aircraft were subsequently dispersed for preservation at Barbados (AE), Edinburgh (AA), Filton (AF), Manchester (AC), New York (AD), and Seattle (AG) with one (AB) remaining at Heathrow.

On its retirement flight to The Museum of Flight in Seattle, on November 5, 2003, Alpha Golf set a New York City-to-Seattle speed record of 3 hours, 55 minutes, and 2 seconds. Much of the flight was over northern Canada, where it flew supersonic for 1 hour, 34 minutes, and 4 seconds. It was first flown in April of 1978 and delivered to British Airways in 1980. It was the eighth British-built production Concorde. Equipped with four powerful Rolls-Royce/SNECMA Olympus 593 Mk. 610 turbojet engines, Alpha Golf logged more than 5,600 takeoffs and over 16,200 flight hours while in service.