May 1st, 1967 marked the date when Elvis Presley and Pricilla Beaulieu got married at the Aladdin Hotel in Las Vegas, Nevada. However, the journey to Vegas from Presley’s home in Palm Springs, Colorado involved a fair bit of subterfuge to avoid the press and the usual crush of fans. A little after midnight, the small wedding party hopped the back wall in Presley’s yard, where some cars were waiting to whisk them off to Palm Springs International Airport.

Here they had help from Elvis’s close friend, Frank Sinatra. The legendary crooner had offered Presley and Pricilla the use of his Learjet for the flight from Palm Springs to Las Vegas, as well as the return journey back to the ‘Springs’ for their honeymoon. Sinatra’s Learjet was a first-generation Learjet 23 (N175FS) nicknamed Christina II after Sinatra’s youngest daughter. Normally based with Clay Lacy Aviation in Van Nuys, California Airport, the Learjet was conveniently waiting with Sinatra in Palm Springs that morning on May 1st, 1967 – ready to fly to Vegas.

The Learjet 23 could only carry six passengers, so a second chartered aircraft carried the rest of the wedding party. Elvis also had Priscilla’s parents flown in for the wedding, although the entire wedding party totaled just 14 people, plus Elvis and Priscilla. 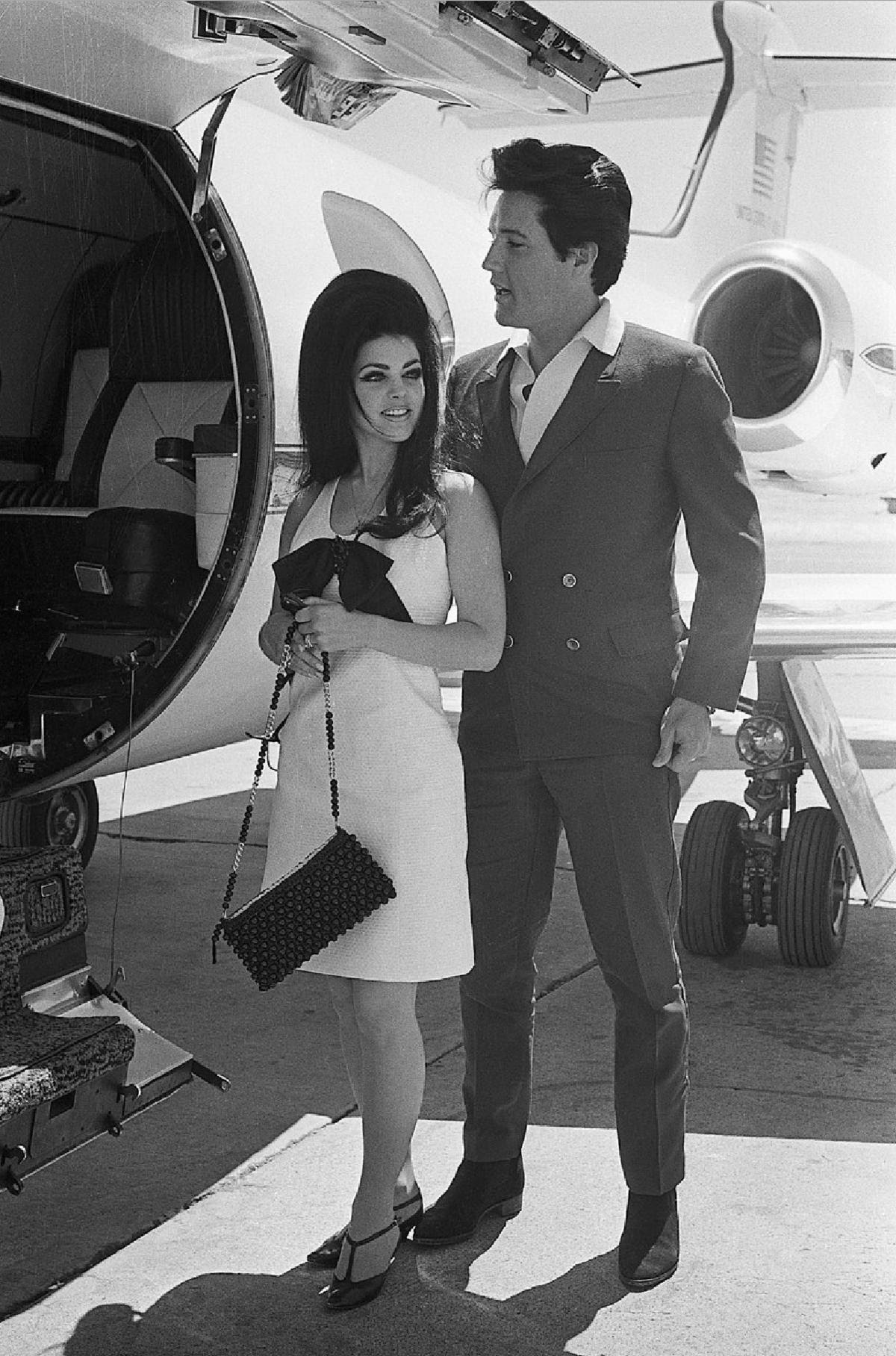 In the early hours of May 1st, 1967, Elvis and Priscilla received their marriage license from the Las Vegas Courthouse, and just before 10:00 AM, they officially wed at the Aladdin Hotel and Casino, with their fourteen guests in attendance; the entire ceremony took just 18 minutes. The reception which followed, however, included about 100 of their closest friends –  and a five-foot-tall, six-tier wedding cake!

By this point, of course, word was spreading about the Presley’s wedding and fans began showing up en masse. It was time to get the ‘happy couple’ out of the Aladdin and back to nearby McCarran International (now Harry Reid International Airport) so they could make their escape. When they arrived, the jets were ready to go, so the newlyweds climbed back aboard Sinatra’s Learjet and flew back to Palm Springs for their honeymoon.

Over the next several years, Elvis and Priscilla made regular use of the Learjets. Clay Lacy Aviation supplied Learjets for the Presleys as well as several other Hollywood elites. If Sinatra wasn’t using his Learjet, he would loan it out to other friends and celebrities, but if it wasn’t available, its hangar mate, N464CL, another early-model Learjet, would fill its place. Clay Lacy would often pilot the aircraft himself, with a copilot selected from his staff.

Five years passed  quickly following Elvis and Priscilla’s Las Vegas wedding. Their child, Lisa Marie, was born on February 1st, 1968, but by the end of April 1973, all was not bliss.

Clay Lacy received a phone call, it’s Elvis on the line requesting that Lacy fly the Presley’s from Palm Springs to Santa Monica on the following day, April 30th. Since their wedding/honeymoon flight in 1967, Elvis had been using Clay and his Learjet, N464CL frequently  to fly them around the USA.

By midmorning on April 30th, Clay had landed the Learjet in Palm Springs. Elvis shows up, with Lisa Marie and some of his entourage – but no Priscilla. Elvis mentions that Priscilla should be arriving soon.

Leaning up against the Learjet’s port wingtip fuel tank, Clay and Elvis pass the time chitchatting while five-year-old Lisa Marie runs rings around them, slowly widening her circles until she is doing laps around the entire aircraft. After about 45 minutes, Elvis sends one of his guys to retrieve Priscilla, who soon shows up, so they all pile into the Learjet and make the flight to Santa Monica.

Once the plane lands, the Presley’s and their entourage deplane and climb into some limos waiting nearby. However, one of Elvis’s guys needed to fly to Van Nuys with Clay in the Learjet. During that brief flight, this fellow came forward to the cockpit, leaned over to Clay and said, “Did you notice that everyone was a little somber?” Clay glanced at the man and said, “Yeah, what’s going on?” To which the man responded, “Well, they are getting divorced tomorrow!”

So, in addition to Learjet 24A N464CL escorting Elvis and Priscilla to their wedding, it also did the same for their divorce … giving it quite a striking, pop-cultural history. This jet is now retired, and a part of the Palm Springs Air Museum’s collection. 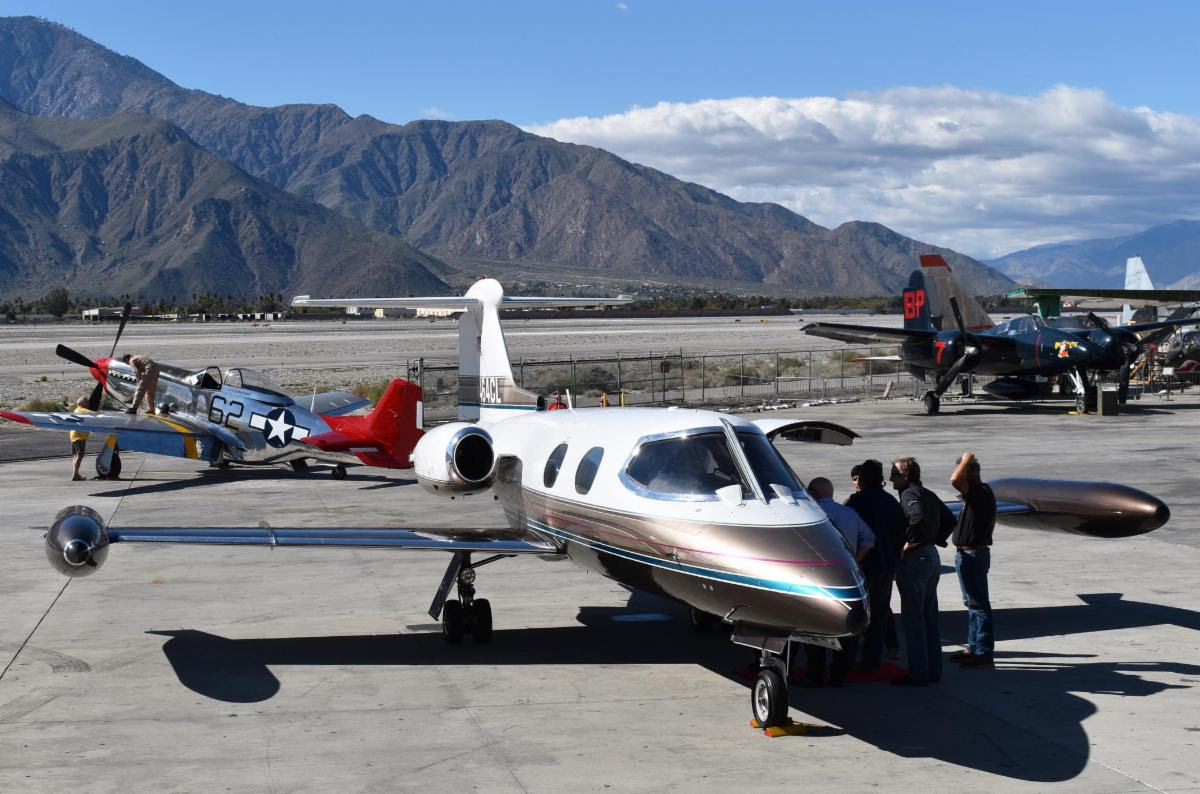 Elvis eventually bought his own jets in 1975 – a large Convair 880 nicknamed Lisa Marie in honor of the Presley’s daughter, and a smaller Lockheed JetStar II nicknamed Hound Dog (whose pilot was a man named Milo High!) Both of these jets survive to the present day at Graceland, Elvis Presley’s home (now a museum honoring the late singer) in Memphis, Tennessee. 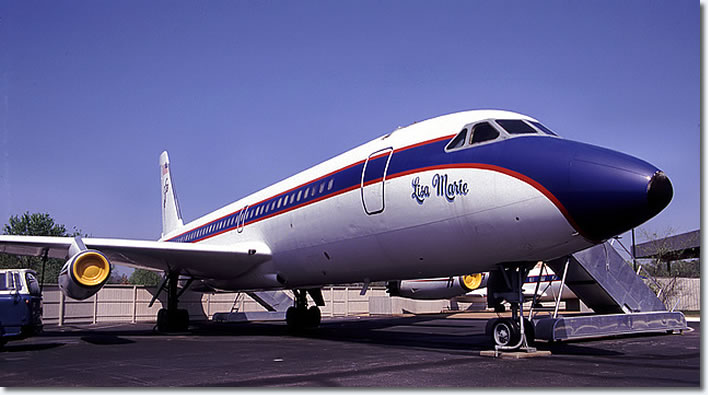