Slip on the flight suit of one of the first USAF African-American B-47 and B-52 pilots. Put on your helmet for the next mission over Vietnam with an all-white crew, then pin on the silver oak leaves of a lieutenant colonel after a lifelong struggle for recognition and approval. And be sure to buckle your seat belt because this story is one heck of a ride.West Virginia native Edgar Lewis joined the newly formed United States Air Force on July 13, 1949. “To this day I can’t tell you why I chose to get into airplanes,” he recalled. “I had never even seen one.” Asked if he meant to say “never inside of one,” Lewis replied, “No, I’m serious. I’d never seen an airplane until I joined the Air Force.”

After high school Lewis attended Hampton Institute, the historically all black university in Hampton, Va. Founded in 1868 to provide a higher education for freedmen, Hampton also accepted Cheyenne, Comanche, Kiowa, and other Plains Indians from 1875 to 1923. 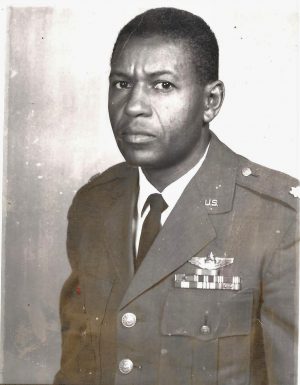 “I attended for two years but didn’t make enough money during my summer employment to return for my junior year,” he recalled. “Money was just too tight, so I decided to join the military to take advantage of the G.I. Bill. I was sent to Lackland AFB in San Antonio for my primary training, graduated, then was asked what I wanted to do. I told them I wanted to train in electronics, but they said, ‘Those career fields are not open for people like you. How about drill instructor?’ Well, me being dumb I didn’t know you couldn’t refuse an assignment in the military. I insisted on electronics until they finally said, ‘OK.’”Sent to Randolph AFB, Texas, to be tested, Lewis said, “I have a feeling they thought I couldn’t pass the tests for electronics, but I did. I was a pretty decent football player, too, and made the football team. The athletes received special privileges so a lot of folks didn’t take too kindly to me playing football. President Truman integrated the military in 1948, but not everyone accepted his decision. A cross was burned at the foot of my bed, so I don’t talk about my training at Randolph very often.”

Lewis complained about the racial incident. Instead of addressing the problem, a major took the easy way out and tagged Lewis as a “trouble-maker,” then transferred him to Ellington AFB near Houston. Lewis said, “They didn’t want me either, but a B-47 program was cranking up with a new navigation system and they needed candidates for that. So, I got shipped to Long Island, N.Y., to attend a private civilian training program on the new B-47 electronic system.”

Lewis spent four months training at Long Island before being sent straight back to Ellington AFB. “That didn’t make sense because they didn’t have B-47s at Ellington,” he said. “Therefore, I received orders for a base in Wichita, McConnell AFB, to work on the new B-47 electronic system. I was there about a year before deciding I needed to make a big decision concerning my career. I’d been on the WWII era B-29s and noticed the pilots and thought …. shoot, I can do that. So I applied for training as a pilot. They tested me again, which was really no big deal since I’d been tested all my life, and I passed those tests, too.”

His next port-of-call was Marana AFB in Arizona. “My primary training as a pilot was in the T-6 Texan. It was a good plane, but to me a little stupid to start people in it, but I survived,” he said. “The thing I remember most about finishing primary is going to Davis-Monthan AFB in Tucson to fly T-28s. My class was designated 53 Foxtrot. In 2003, 50 years later, I found out that I hadn’t been invited to the graduation ceremony. The ceremony was held in downtown Tucson. Two African-Americans in a class of 120, and neither of us were invited to our own graduation.”

But the training, and flying, and service to country continued. At Craig AFB Lewis flew the Lockheed T33 Shooting Star jet fighter. At Selfridge AFB, MI Lewis found himself behind the controls of the legendary F-86 Sabre Jet of Korean War renown. He mentioned, “I was the first black pilot to fly jets out of there.”

Lewis paused a moment. “You know, it’s difficult to explain, but some things in the military have changed, some haven’t. And our country is still addressing problems we had 50 years ago, but until we choose to attack the issues and solve them then, well, it could be our own demise. We still must try to understand each other; to work with each other.”

Familiarity with a B-47’s navigation system and his piloting skills earned Lewis a seat behind the controls of a B-47. “I still recall my first ride on a B-47 with a new crew, three of us, pilot, copilot, and navigator,” he said. “After we landed my copilot came to me and said, ‘Sir, you’ll have to find a new copilot.’ When I asked why, he replied, ‘Sir, my wife is from Selma, Ala., and I don’t think she wants me flying with you.’ I told him as far as I was concerned, he was my copilot, but if he wanted to change, then go do it.”

At home, Lewis told his wife about the copilot’s reluctance to fly with a black pilot. “You know what she told me?” he asked. “She said, ‘Invite them to dinner.’ I couldn’t believe it, but that’s what I did. Well, as fate would have it, my wife and his wife really hit it off. He stayed on as my copilot with no more problems.”

Eventually reassigned to a base in Kansas, Lewis rebelled. “At that base my wife and family would have to live down by the railroad tracks, not with other officers and their families. We weren’t going through that again, so I tendered my resignation.”

The Air Force refused his resignation. Instead, Lewis accepted orders to Lockbourne AFB in Ohio to continue flying the B-47. “I wasn’t there too long before my commander called me in and said that 8th Air Force had the new B-52 Strategic bombers. They’d never had an African-American B-52 commander, and the Air Force wanted me to go. That’s how I got into the BUFs (Big Ugly … Fellows). The B-52 is an awesome weapon, but it’s clumsy and you had better stay ahead of the aircraft because if you get behind it, it’s difficult to catch up.”

All his training, practice and more practice, fighting the controls while fighting injustice, now came to fruition. From Kadena AFB in Okinawa, Anderson AFB, Guam, and U-Tapao AFB in Thailand, Major Edgar Lewis flew 226 combat missions over Vietnam. On his missions: “We didn’t go into North Vietnam, not yet, so our missions were in South Vietnam or reasonable facsimile. Sometimes we didn’t know the target, just the coordinates. We were fortunate, only two bad incidents that I recall. We lost an engine on one mission during midair refueling. That can be a bit touchy, but we completed our mission with one engine out. On another we lost our heating system. That, too, was a bit touchy.”

Lt. Colonel Edgar Lewis served 23 years in the Air Force, then served 22 years with the FAA. Asked to choose his favorite aircraft, Lewis replied, “I didn’t have one. But if forced to choose, I’d say the B-47. To tell you the truth, we did some pretty stupid things in that aircraft, like pulling an Immelmann. (A half loop followed by a half roll, resulting in level flight in the opposite direction). We lost some guys doing that, pulling straight up in a B-47. The stress could pull the wings off.”

His final thoughts on an Air Force career: “Even with the racial issues, I enjoyed my Air Force career. Truthfully, there was no other profession I could have gone into during that time that would have afforded me the opportunities that I was given. I think every American should have to go through some type of military training, if not for a career, then to learn discipline. For some of us the military was the only discipline we ever received. I brag about it … people say, well, the military trained you well … and I say, no, I had to train myself.”