A ‘dustoff’ in Burma? Pete, you mean Vietnam, right? Yes and no. It’s true that I’ve been home bound for a few weeks, but no, the Corona quarantine has not warped my cerebral functions, I hope. Anyway, here’s the story. 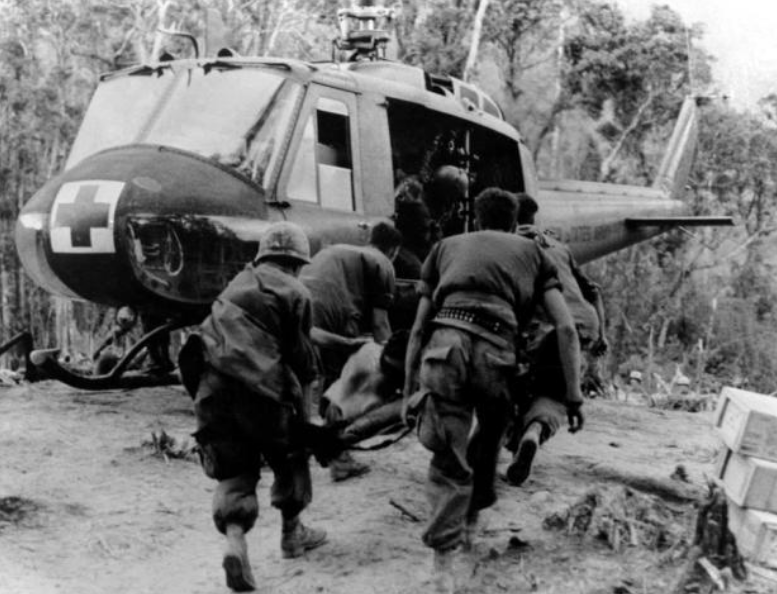 It’s true, the term ‘dustoff’ was the radio call sign given to the first aeromedical helicopter evacuation unit in Vietnam, the 57thMedical Detachment. The year was 1962. Initially, the 57thcommunicated on any vacant frequency available. Meanwhile, down in Saigon, the Navy Support Activity controlled all the call words (signs) in South Vietnam.It was the dry season, and the fields countrywide were dry and dusty which caused chopper wash to blow dirt and dust all over men and material near the landing zone. ‘DUSTOFF’ sounded appropriate and was quickly approved by Navy Support Activity. In short order, evacuation choppers throughout Vietnam adopted the new call sign and it remained the most used call sign for the remainder of the war. The 1stCav was one exception: they used the call sign Medevac, although a call for a ‘Medevac’ or ‘Dustoff’ in Vietnam meant the same thing and both call signs were used extensively. The call sign ‘Dustoff’ was changed often, but the aviation units and ground troops refused to call these lifesaving helicopters by any other name. The ‘DUSTOFF’ legend was born.Speaking of legends, let’s visit Hawkeye, Trapper John, Hot Lips Houlihan, the insightful and manipulative Radar, and TV’s first distinguished cross-dresser and Section 8 wannabe, Corporal Klinger, all members of the4077thM*A*S*H unit (Mobile Army Surgical Hospital) in Unijeongbu, South Korea. The drama and situation comedy TV show that ran from 1972 –1983 was one of the highest rated shows in television history.M*A*S*H won numerous awards pluslured the American public into dialogue and awareness of the Korean War and the Army Medical Corps. And in the background, the celebrated symbol of the Medevac or ‘DUSTOFF’ mission in Korea, the H-13 Sioux helicopter, soon became familiar to American television audiences. 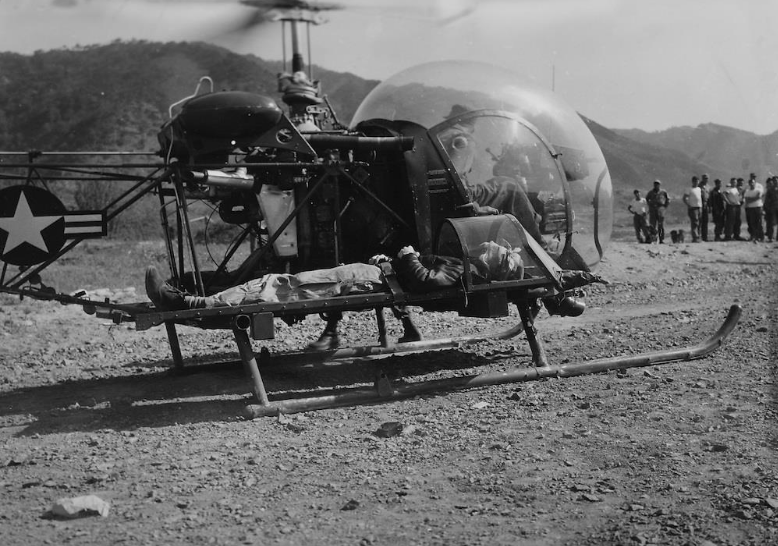 Even though these ‘newfangled rotating machines’ were still in their infancy, the up-and-coming American helicopter industry supplied several choppers to Korea: the Hiller H-23 Raven,Bell Model 47, thePiasecke H-25, Sikorsky H-19, and the Sikorsky H-5. However, it was the iconic Bell H-13 Sioux that our front line ground troops nicknamed the “Angel of Mercy.” Of the 23,000 casualties transported to forward army hospitals, the Sioux flew 18,000 of our boys to M*A*S*H units.In WWII, the death rate of evacuated casualties before they reached medical facilities was 4.5. In Korea, the death rate dropped to 2.5, truly ‘Angels of Mercy.”

Admittedly, the Sioux choppers, prone to mechanical problems and unarmed, could become isolated and/or make easy targets for enemy gunners. Accordingly, the 8thU.S. Army surgeon set limits on the use of choppers which included restricting their use for only the most seriously wounded.Have you ever met a combat helicopter pilot? They tend to be, let’s see, how should I put this….a little ‘different’ than normal folks, like the ability to develop hearing problems when given a restrictive order. The chopper pilots in Korea often marginalized or simply ignored constraints and did what had to be done. Naturally, they were pilots, not trained medical personnel, but they were the ones to improvise and improve the methods of transporting wounded soldiers, such as the two exterior pods on the Sioux and Raven helicopters.

In March of 1953, the 6thTransportation Company received its first mission flying the newly developed H-19 Chickasaw, the military’s first true cargo and troop transport chopper. Faster, and with a better range than the Sioux, it could MEDEVAC four to six litters with one nurse onboard. Too, it could transport eight fully-equipped soldiers into combat. In June of the same year, 45 Army and Marine H-19s participated in the largest helicopter operation of the war transporting 800 Republic of Korea troops during one mission.

After the ‘ceasefire’ armistice was signed on July 27, 1953 (an armistice only; we are still technically at war with North Korea) the 6thand 13thTransportation Companies (helicopters) made approximately 1,100 flights in a 33-day period transferring over 5,600 American and Allied POWs from the exchange location at Panmunjom to safety and freedom in the south.

Since choppers were not used in WWII for Medevac missions, the Korean War is considered the ‘baptism under fire’ for our country’s “Angels of Mercy.” Uh, wait just a minute here. Who is Pvt. Howard Ross and what is a YR-4Hoverflyand what the heck were both of them doing in Burma in January of 1945?

Well, as luck would have it, three British soldiers and U.S Army Pvt. Howard Ross were pulling duty at a weather station atop a 4,700 foot mountain in the Naga Hills approximately 160 miles northwest of Myitkyina. Myitkyina was one of the few Allied airbases in northeast Burma. Pvt. Ross had accidentally shot himself in the hand with a .30 caliber machine gun. The wound was rapidly becoming infected and Pvt. Ross required medical attention. Walking to an aid station would take 10 days. A plan to parachute a medical officer into the station was considered, but due to the terrain the plan was also considered suicidal. So, what to do? 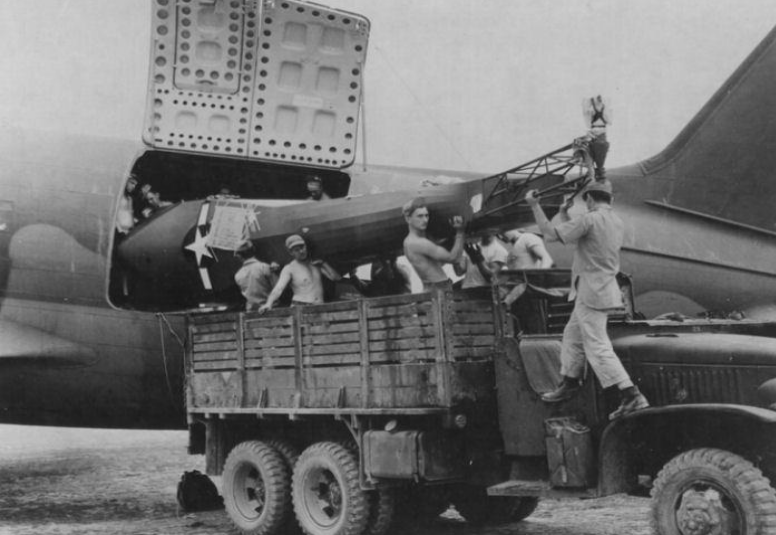 During the night, 1stLt. Leo Kenney, Commanding Officer of the Air Jungle Rescue Unit, roused Steiner and Shoemaker from a sound sleep to inform them an enlisted man had accidentally shot himself through the hand with a machine gun at a weather station atop a 4,700 foot mountain and was in desperate need of medical attention.

to prove their worth, the members of the chopper expedition were disappointed to learn the men they came to rescue had already been evacuated.It was still decided to complete the YR-4’s assembly under Lt Shoemaker’s supervision the next day, January 23.By dusk, the tail rotor and nose section had been bolted to the fuselage, and the crew knew the chopper would be ready to fly by noon the next day if needed.During the night, 1stLt. Leo Kenney, Commanding Officer of the Air Jungle Rescue Unit, roused Steiner and Shoemaker from a sound sleep to inform them an enlisted man had accidentally shot himself through the hand with a machine gun at a weather station atop a 4,700 foot mountain and was in desperate need of medical attention. Pouring over maps of the area, it was decided a rescue mission might work.

The assembly was completed, the YR-4 fueled and Captain Peterson and Lt. Steiner aboard the YR-4 and one of the escorting L-5 Sentinels before takeoff tested throughout the day and judged ‘ready to go’ on the next morning, January 25.Captain Peterson and Lt. Steiner flew the mission, alternating as pilots. Since both were unfamiliar with the countryside plus the YR-4 had no radio, two fixed-winged Stinson L-5Sentinel liaison aircraft escorted the chopper. The average speed of the YR-4 was around 60 mph; the L-5 flew 30 to 40 mph faster, therefore the fixed-winged Sentinels had to continuously circle to keep the helicopter in sight.

Nevertheless, the YR-4 and its two escorts lost sight of each other four times. Captain Peterson and Lt. Steiner recovered their two escorts by ‘flashing’ a mirror, a reflection visible for about ten miles. Then the YR-4 had trouble getting over one 5,000 foot mountain, but finally topped the peak on the third NAGALAND attempt. It was, however, running out of fuel, forcing the pilots to land the chopper on a sandbank on the Chindwin River.

The L-5s flew on to the small airstrip at SinkalingHkamti to pick-up two 5-gallon gas cans full of fuel, took off again then dropped them to the YR-4 on the sandbank. With ten gallons of fuel in its tank, the chopper took off and made it to the airstrip at Sinkaling Hkamti. The novelty of the helicopter caught the immediate attention of four British soldiers who were at the airstrip repairing three damaged British aircraft and a gathering of inquisitive Burmese had to be kept away from the YR-4 with considerable difficulty.

The next morning two L-5s returned. They circled the mountain for about an hour; dropped fuel, and due to no radios, dropped messages to Captain Peterson. Still, Peterson did not take off. Something was wrong. Using white cloth, Peterson spelled out on the ground: OIL. The L-5s returned to Sinkaling, loaded up with oil, returned to the mountain top, and dropped the much needed lubricant.The native Burmese atop the mountain, the Nagas, amazed by the YR-5, presented Captain Peterson with a spear and other gifts.The Nagas were notorious for their head-hunting proficiency.

Fueled and ready, Peterson took off from the rough mountain airstrip with Pvt. Howard Ross aboard. Pvt. Ross’s wounded hand was noticeably swollen,but the 21 year old soldier was excited to be aboard and flying in the ‘newfangled rotating machine,’flown by 21 year old Captain Frank Peterson. Landing at Sinkaling, Pvt. Ross was transferred to an L-5 and transported to Myitkina for hospitalization. He made a full recovery.

Captain Peterson and Lt. Steiner remained at Myitkina with the YR-4 to instruct other men of the Tenth Air Force on its use and maintenance. Lt. Steiner flew further missions locating aircraft that had been downed, removing valuable instruments and/or sensitive documents plus marked the aircraft with paint so they could be identified from the air and not re-reported. 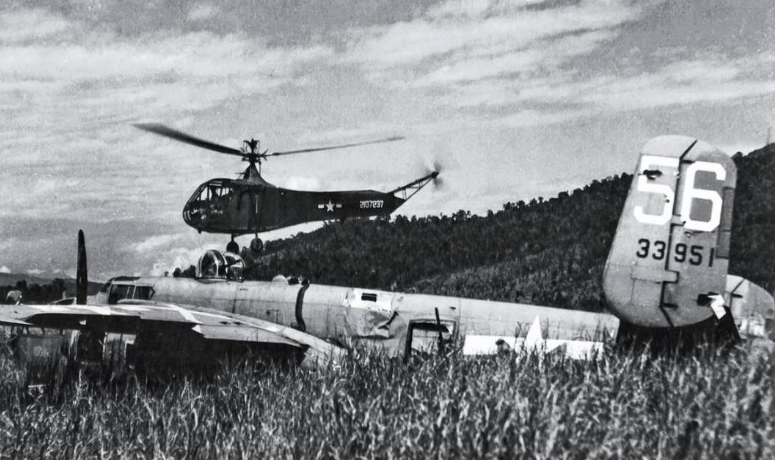 Valiant men flying newfangled flying machines saved the lives of many soldiers in Burma, the only location during WWII that choppers flew combat rescue missions. Choppers were used elsewhere, but not on combat missions. Lt. Harman Carter, top leftin photo, a former biplane instructor, actually made the first helicopter combat mission when he rescued 4 stranded and wounded Chindits (British and Indian Long Range Penetration Groups) in Burma. But that’s another story.