Nearly 70 years after airman Merrel L. Duncan from Dundee, Minnesota survived 30 hazardous missions over WWII Europe in a Boeing B-17 Flying Fortress, his son Michael is commemorating his father’s war record in a uniquely memorable manner. Technical Sergeant Merrel L. Duncan flew his 30 missions as a Group Lead Radio Operator in the US Army Air Forces’ Eighth Air Force, 9lst Bomb Group, 401st Squadron, based at RAF Bassingbourn in Cambridgeshire, England. A heavy bombardment group, they were charged with bombing heavily defended German strategic targets, and in the first seven months of action, the 9lst Bomb Group suffered 82% casualties, most of them 18 to 21 year olds, and lost 41 of their original 48 aircraft. 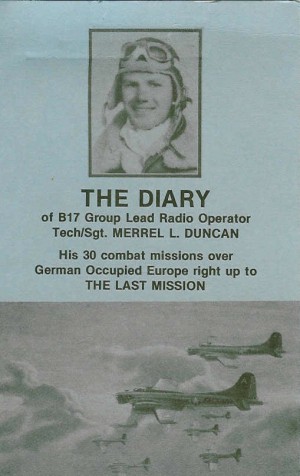 Merrel Duncan, one of the few who survived those dangerous and difficult times, recorded every mission in a small, 60 page spiral-bound diary, noting targets, bomb loads, altitudes, duration of missions, fighter attacks and his personal emotional reactions are all written in simple, and often poignant words. His son, Michael, read the diary for the first time after his father’s death on November 16, 1989. The reprinted diary plays a key role in the remembrance of the B-17 Group Lead Radio Operator and the men who flew with him all those years ago. The son, Michael Duncan, who runs a family owned business in Lake City, Minnesota, commissioned aviation artist, Bryan Moon, to paint his father’s B-17 in formation with other aircraft of the 9lst Bomb Group. The finished artwork, entitled The Last Mission has been published by Michael as a limited edition print. But the distinguishing feature is that each print is paired with a reprint of the hand-written diary of his B-17 bomber crew father. 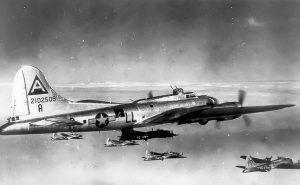 In 1992 Michael Duncan, artist Bryan Moon and retired Captain R.R. Goldsmith, the pilot of Duncan’s original B-17 crew came together for the signing ceremony of the limited edition prints. The gathering at Waterman’s Restaurant in Lake City, Minnesota, brought together for the first time, Captain Goldsmith who flew as Group Lead Pilot, with the son of his Lead Radio Operator crewman. Michael had spent much of the last 36 months coordinating the memorial to his father, contacting several of his father’s surviving crewmen who provided valuable data for the artist to accurately reproduce the wartime bomber in The Last Mission.

Michael Duncan’s production of the print and diary is a unique epitaph not only to his deceased father, but to all the men who flew combat missions over German occupied Europe 70 years ago. As Michael describes it: “This print was done in memory of my best friend, my father, Merrel L. Duncan. My dad grew up on a farm in southwestern Minnesota with five brothers and five sisters. His father died when he was very young, so one of his older sisters helped take care of dad with his mother. Mother Duncan always told dad that within every cloud there is a silver lining. So when dad was climbing to 10,000 feet and breaking through the clouds he saw what his mother had said. There was the sun shining through the clouds with the silver lining.”

“That is why this print is shown with the B-17’s breaking through the clouds and the sun shining through, showing their silver lining. As once was stated “it looks so peaceful before the horrible battles they are about to encounter.” Dad flew 30 Missions of heavy bombardment as group lead out of Bassenbourne Air Base, in England into the ETO (European Theater of Operations). On one of the 30 missions as group lead dad’s B-17 came limping back home to England with 172 bullet holes in the plane and 2 engines knocked out. Dad always said “What a magnificent plane the B-17 was.”

Calling the limited edition print and diary “one last mission I am flying with my dad,” Michael Duncan sees this as a tribute not only to his father, but to all the men and women that have served or currently are serving our country, stating: “Done in his memory, for us never to forget, by his son, Mike.”

Michael Duncan, now getting up there in years himself, and having worked on this project for over 20 years, has significantly reduced the price of the print and diary package to get the last few remaining copies out to the public. For more information about The Last Mission print and the wartime diary, visit The Last Mission Website.