Many of our readers will be familiar with the work of photographer Moose Peterson. WarbirdsNews has written several pieces featuring his exceptional air-to-air work. Most recently, we reported on a short film Moose put together called Warbirds and the Men Who Flew Them. Moose worked on the project in close cooperation with the Texas Flying Legends Museum, and the film closely describes the efforts the museum goes through to forward their mission which they describe as follows:

“The Texas Flying Legends Museum is here to remind our younger generations of the virtue, strength, pride and valor that each member of our armed forces carried with them during a period of times when our country needed them most. We hope that these pristine warbirds can provide a sense of inspiration for those who have not experienced war first-hand, and most importantly honor all Veterans and their loved ones, while inspiring the next generation.” 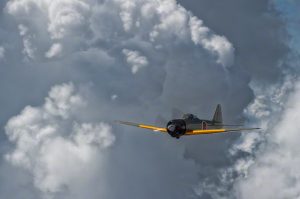 Moose shot over 20,000 still images and more than twenty hours of video during the course of making the film, logging over eight hours in the air. He also interviewed a number of WWII combat veterans, such as P-51 Mustang ace Clarence ‘Bud’ Anderson and Doolittle Raider, Dick Cole, among many others. Alongside the film, Moose Peterson has produced a companion calendar for 2015. As Peterson says, “This calendar is dedicated to the Texas Flying Legends Museum, the men and women they honor with their aircraft and the pilots who fly them today in missions saluting them all.”

The calendar will go on sale at the end of October, but pre-orders are available HERE. They cost $19.95 each, or buy five and get one free.

Moose Peterson only uses top-of-the-line camera gear to capture his images, and anyone interested in learning more about some of the equipment he used for the aerial photography can find out more at the following links…

GoPro  Silver – Click HERE to buy this GoPro on Amazon.