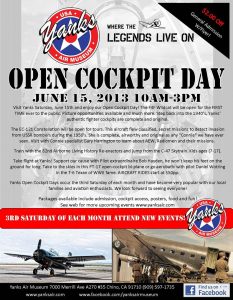 Yanks Air Museum in Chino, California will be hosting an “Open Cockpit Day” on June 15, 2013 from 10AM to 3PM. The centerpiece of the day’s festivities will be the collection’s Grumman F4F Wildcat making its first-ever open cockpit appearance.

The Grumman F4F Wildcat is well known for it’s service in the Pacific Theatre during WWII, and was instrumental in securing victory in the crucial Battle of Midway. While slower and less agile than the Mitsubishi Zeros it was pitted against, the well-armored Wildcat with self-sealing gas tanks, coupled with innovative tactics that took the superior maneuverability and speed of it’s foes into account, racked-up an impressive kill ratio of 6.9:1.

Visitors will also have the opportunity to tour their military variant of the Lockheed Constellation, the Lockheed EC-121T Warning Star, from the early days of the Cold War and before satellites, EC-121T’s used their on-board radar and surveillance systems to detect hostile aircraft, monitor telemetry for missile and space shots, and gather weather, communications and radar signals. The Warning Star carried a crew of 31, the largest crew the Navy has ever flown aboard an aircraft.

Adventurous-types can train with the 82nd Airborne WWII Living History Re-enactors, including jumping from their C-47 Skytrain. Those who fail to see the sense of jumping out of a perfectly good plane can catch a ride on a PT-17 Biplane or for more excitement, take an aerobatic flight in a T-6 Texan.

In addition to the special activities above, you can also view the museum’s large and growing collection of significant aircraft. Packages are available that include admission, cockpit access, posters, food and fun. Details are available at the Yanks Air Museum Website.