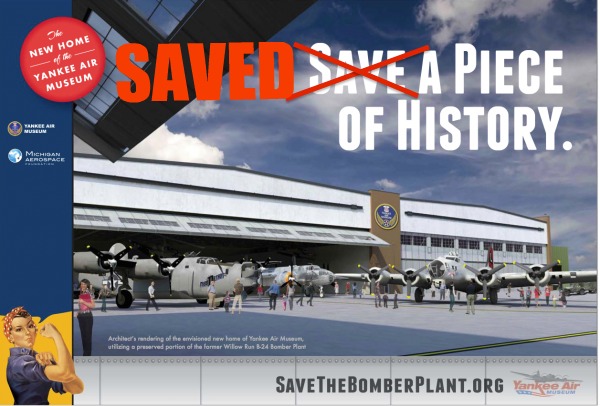 Since the beginning, WarbirdsNews has been following, and helping promote the Yankee Air Museum’s epic quest to acquire for its new home a 150,00 square foot section of the original Willow Run B-24 bomber plant in Ypsilanti, Michigan. The museum was in a race against time to raise the US$8 Million required to close the purchase, restore the building, and prevent its destruction by the wrecking crew already working its way through the rest of the factory. As we reported previously, the museum raised just over 80% of the required funds by their decision deadline. This was enough to convince the RACER trust overseeing the sale on behalf of the US Government, that the museum was capable of taking on the project, and seeing it through. After a month of final negotiations between the two parties, we are pleased to pass on the news that the Yankee Air Museum has officially signed a purchase agreement with the RACER Trust. Other than another small section of the site owned by Walbridge Development LLC, the Yankee Air Museum’s building will be the only substantial structure left of the plant once the Devon Industrial Group completes its demolition.

Much like buying a house, even though the purchase agreement is complete, the formal handover of the property won’t happen until the closing date, which Yankee Air Museum founder Dennis Norton expects will occur in late July or early August. Norton also indicated that actual cost of buying the building itself is an “insignificant” part of the money raised so far, most of which will go to refurbishing the building for their own needs. “We have a lot more left to do,” Norton stated, “but the money we have raised, most of it will be used to do everything it takes to turn it back into a functional building,” he said. “That’s what probably 95 percent of the money is for.”

The RACER Trust extended deadlines for the museum numerous times in the past year to help the deal come to fruition. Norton said that the purchase agreement will keep the terms of the deal with the RACER Trust confidential. More funds will certainly be needed to fully restore the building, and turn it into a the world class museum it deserves to be, so therefore the “Save the Bomber Plant” campaign will continue for the next several years. Please click HERE to see how you might be able to contribute to this historically important project!

The SaveTheBomberPlant.org campaign has been organized by the Michigan Aerospace Foundation to preserve a portion of the Willow Run Bomber Plant as the new home of the Yankee Air Museum.

DONOR RECOGNITION
The Michigan Aerospace Foundation and Yankee Air Force are committed to publicly thanking and honoring the generous people and organizations that support our work. To that end, all donors not requesting anonymity will be recognized on an online donor “honor roll.” For larger gifts, some truly extraordinary giving and recognition opportunities have been created, ranging from a listing on a permanent donor wall at the Museum to opportunities to name programs, galleries or the new facility itself. For more information on specific giving and sponsorship opportunities, contact the SaveTheBomberPlant.org team at info@savethebomberplant.org