2022 marks the 80th year of the Women Airforce Service Pilots (WASP), the quasi-military organization which trained women to fly, test aircraft and train other pilots during WWII; the program traces its roots to a pair of smaller units formed in September, 1942. As part of their efforts to celebrate this major anniversary, the National WASP WWII Museum is holding a special event over April 29th and 30th, 2022 at Avenger Field, the base in Sweetwater, Texas where many of the WASP underwent their training. To honor America’s first females to fly military aircraft, the Museum is recreating a wartime party scene, complete with WASP reenactors, a live swing band, good food, and – best of all – aircraft!

The flight line will once again host the training aircraft the WASP flew, including eleven BT-13s and many other wonderful WWII-era warbirds, including the B-25 and DC-3. All-female crews will also be in attendance alongside their U.S. Air Force, Army, Marine Corps, and Navy aircraft. 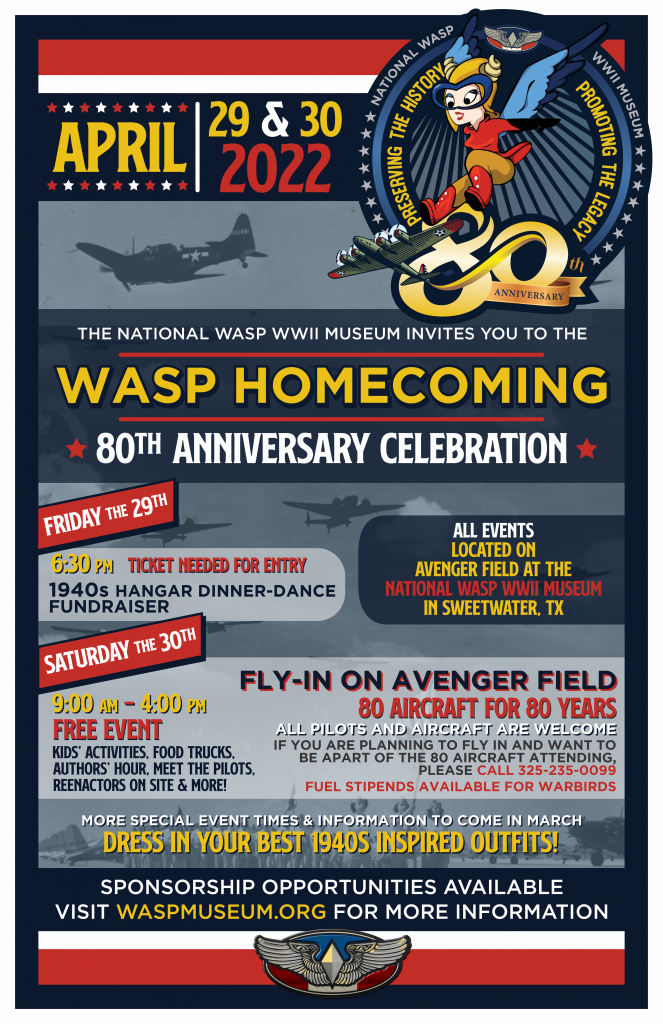 Visitors will enjoy many other activities, including the opening of a permanent exhibit describing the American history of black pilots (curated by historian Monica Smith) and a special temporary exhibit on John and Marie Clark (B-17 and WASP pilots respectively) courtesy of the Yankee Air Museum. Other activities during the two-day celebration will include author signings, special conversations, and the Cadet Zone.

Saturday’s fly-in and activities are free, while Friday’s Dinner and Dance Fundraiser is a ticketed event to raise money for all-new exhibits in Hangar 2, a hangar dating from 1929 which formed part of Sweetwater’s first airport.

For more details about the event, to purchase tickets, or to learn more about Hangar 2 renovations, please visit www.waspmuseum.org or call +1 (325) 235-0099.