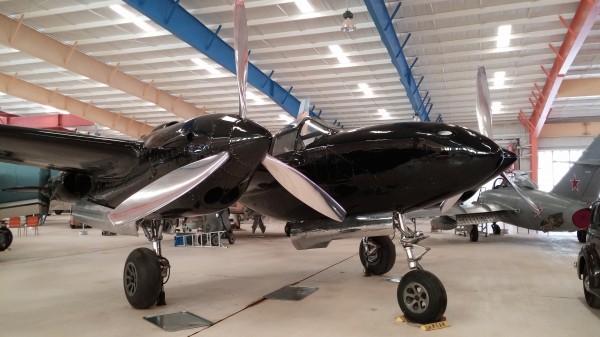 The War Eagles Air Museum based in Santa Teresa, NM has a wonderful collection of aircraft, two in particular stand out:  a TF-51 Mustang which is the only TEMCO TF-51 still in existence and a marvelous P-38L. The history of War Eagles Air Museum’s Lockheed P-38 Lightning, unfortunately, is not documented as well as the museum would prefer. It is pretty sure that the aircraft was used in South America for aerial survey work from 1953 until early 1957, where it was based or what missions it flew its unknown.

In the mid-1930’s , as international tensions rose in Europe and as Japan aggressively expanded it empire in Asia, some U.S. military planners realized that America, which was still a semi-isolationist nation, could be in a bad position. At the time, the Army and Navy fought bitterly over what little procurement money was available, and neither had any interest in developing new technology. Most aircraft in service were obsolete. But two forward thinking junior U.S. Army Air Corps officers, Lieutenants Benjamin Kelsey and Gordon Saville, had a strategy to beat the bureaucracy. Essentially, the two young officers invented a new category of bomber-defense aircraft that they called an “interceptor,” and they convinced the Air Corps to solicit proposals from industry to develop one. The service issued Circular Proposal X-608 in February 1937, calling for a long-range, high-performance aircraft using Allison’s new turbo-supercharged liquid-cooled V-1710 V-12 engine. The aircraft’s top speed was to be 360 miles per hour, compared to the 300-miles-per-hour of contemporary pursuit aircraft. The new airplane would also be required to climb to 20,000 in 6 minutes and carry heavy armament, including a cannon. The Consolidated, Curtiss, Douglas, Lockheed, and Vultee companies submitted proposals. The Lockheed Aircraft Corporation, of Burbank, California, won the competition. On June 23, 1937, the Air Corps awarded Lockheed a $163,000 contract to build one twin-engine XP-38 interceptor. Lockheed called it the Model 22–it was the 22nd aircraft design to emerge from the fledgling, 11 year old company, and it was Lockheed’s first military contract.

The XP-38 was the product of a 50 man design team under the joint leadership of Lockheed’s Chief Designer, Hall L. Hibbard, and young, energetic Senior Designer Clarence L. “Kelly” Johnson, who later created the legendary “Skunk Works” and because arguably the most famous aircraft engineer in the world.

Despite the prototype’s crash, the Air Corps still remained interested in the XP-38, and on April 27, 1939, ordered 13 refined and improved models designated YP-38’s. Production orders from France, Britain, and the Air Corps came in even before the first YP-38 flew, totaling 733 by July 1940. By the end of the war, Lockheed and its wartime production partner Consolidated Vultee, in Nashville, Tennessee, produced over 10,036 P-38’s in 18 different versions.

P-38’s served in all theaters of operation thoughout WWII, from primary escort duty in the early days of the daylight bombing campaign in Europe to fighter missions in North Africa and Italy, and even in the harsh conditions of Alaska’s Aleutian Islands. They gained the most fame in the South Pacific, where they savaged Japanese ships and aircraft with a kill ratio of more than 10 to 1. A flight of P-38’s over Bougainville in the Solomon Islands shot down the Japanese Mitsubishi G4M Betty carrying Admiral Isoroku Yamamoto, architect of the Pearl Harbor attack. Major Richard Bong, the U.S.’s top scoring fighter ace of WWII, scored most of his 40 victories in a P-38. No other WWII aircraft performed as many roles as the P-38 with such tremendous success. 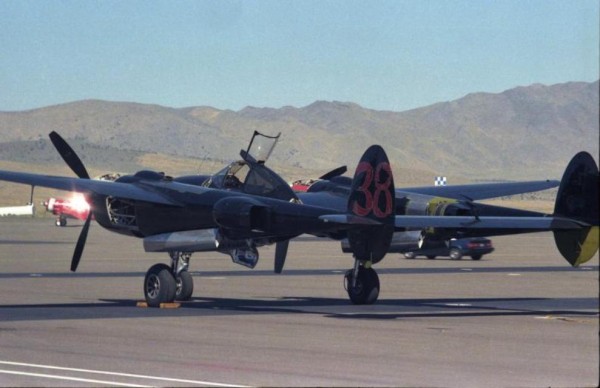 War Eagles Air Museum‘s P-38L-5-LO left Lockheed’s Dallas Modification Center in May 1945. The War Assets Administration surplused it in January 1946 and stored it at Kingman, Arizona. Russell C. Reeves of Tulsa, Oklahoma, bought it in April 1946 for $1250. He sold it to the Tennessee Valley Authority (TVA) in November 1950 for aerial survey work. In July 1953, the Aero Services Corporation, of Philadelphia, Pennsylvania, bought it and sent it to South America for photo-mapping work. The next owner was James M. Cook, of Jacksboro, Texas, who bought the aircraft in January 1957 and flew it for 12 years in weather research for the Department of Commerce. The penultimate owner, businessman Gary R. Levitz, of Grand Prairie, Texas, bought it in June 1969. He modified it for air racing by removing the turbosuper-chargers (to reduce weight and because they weren’t needed in the thick air close to the ground at which pylon races take place), removing the wing flaps, installing lower drag “H” model engine cowlings, fitting an air induction scoop atop the engines and riveting shut the oil cooler outlet doors. Shortening the propeller blades by several inches allowed the engines to run at higher RPM without the prop tips reaching the speed of sound. Starting in 1970, Levitz raced the all black aircraft as Double Trouble at the Mojave and Reno Air Races. At Reno in September 1983, it suffered extensive damage to the right propeller, boom, and wingtip when a crewman inadvertently retracted the landing gear in the pit during an engine runup. War Eagles Air Museum founder John MacGuire bought the damaged aircraft soon after the incident. He had it repaired and flown to the museum, where it resides today as a spectacular example of one of America’s most significant combat aircraft.