On June 3rd, the USS Midway Museum in San Diego, California took delivery of their freshly-restored LTV A-7B Corsair II. A crane carefully winched the now-pristine naval attack aircraft onto the flight deck of the retired aircraft carrier, USS Midway, the museum’s home. Over the past two years, museum personnel and volunteers lavished more than 2,000 hours of restoration labor on the aircraft in a workshop at nearby Naval Air Station North Island; she now looks resplendent in livery worn by the Warhawks of Attack Squadron VA-97.

The Corsair II is on loan from the National Naval Aviation Museum in Pensacola, Florida. She rolled off Chance-Vought’s production line in Dallas, Texas as an A-7B-1-CV during early 1968, with the U.S. Navy taking delivery of the aircraft soon after with the Bureau Number 154370. Her first squadron was the Golden Warriors of VA-87, which she joined at NAS Cecil Field in Jacksonville, Florida during early June 1968. Interestingly, this unit was the first US Navy fleet squadron to field the type. They deployed aboard USS Ticonderoga for a period from June 27th through August 3rd, after which Bu.154370 returned to Cecil Field to join VA-174. With this unit, pilots of the newly-reformed VA-15 trained up on the A-7, later absorbing some of VA-174’s assets, including the Corsair II in this story. Bu.154370 remained with VA-15 for five years, which included carrier deployments aboard USS Intrepid (8 Apr – 26 Jun ’69) and USS Franklin D. Roosevelt (26 Jun ’69 – 27 Oct ’71 and 23 Sept ’74 – 22 Jun ’75). After her final tour aboard the FDR, she returned to Cecil Field in June, 1975. That November the Corsair II joined a Naval Reserve Unit, VA-205, at NAS Atlanta in Georgia and NAS Jacksonville.

The aircraft has been on display at the USS Midway Museum since the museum opened in 2004, but exposure to the elements aboard the carrier’s flight deck had taken a toll, which necessitated some restorative work. As a consequence, the aircraft was removed from display and sent to NAS North Island for some TLC a couple of years ago. Fully refurbished, she should be ready for another extended period on public display aboard the carrier. While it is difficult to maintain historic aircraft on outside display longterm, under these circumstances, positioned on the flight deck as they might have been during their service lives, they provide a far more compelling storytelling device. 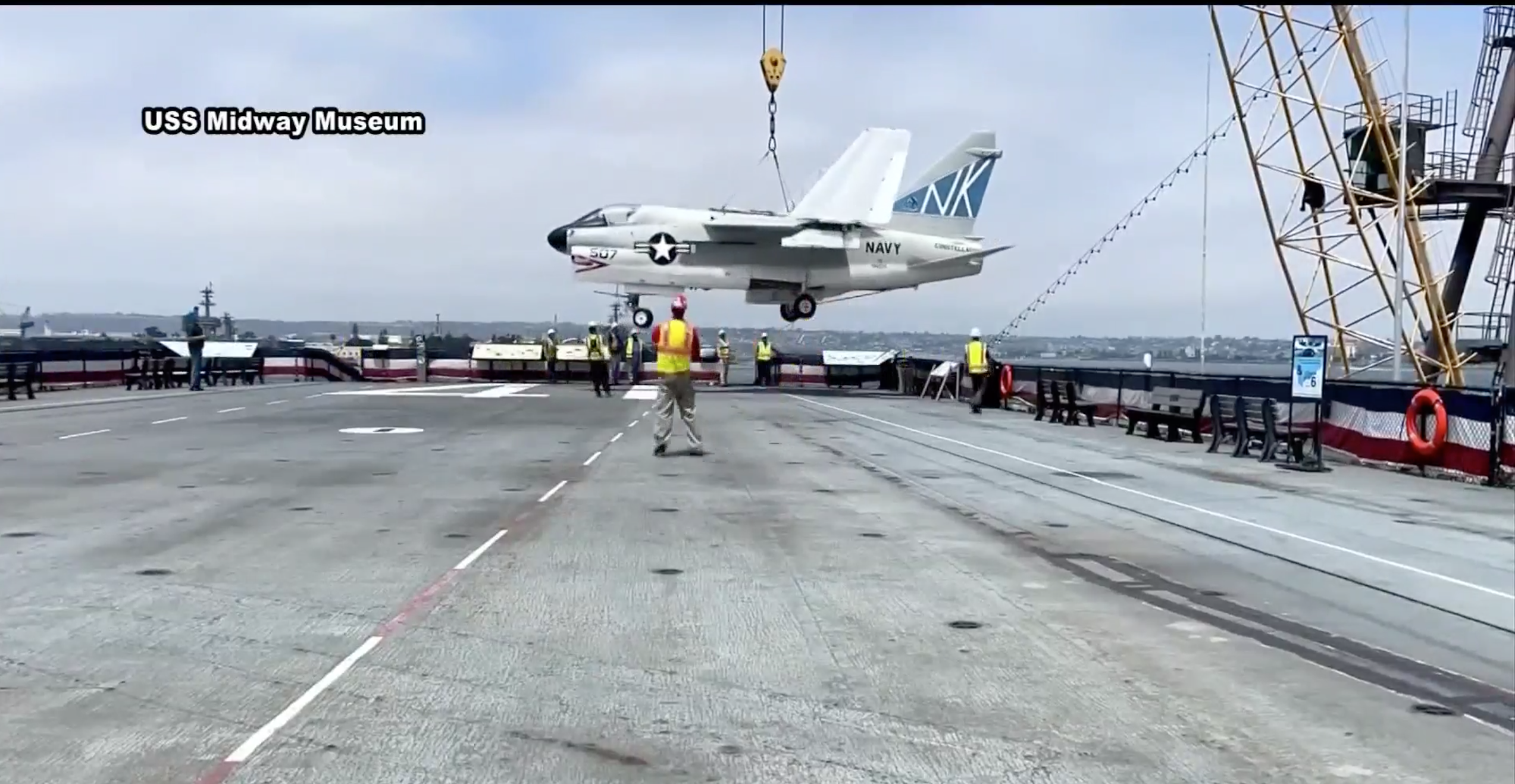 USS Midway is obviously exposed to the elements too, which makes her maintenance an expensive and long-term investment, but she had a remarkable career, and her history is important to preserve for future generations, as the museum’s website so aptly describes…

The USS Midway was the longest-serving aircraft carrier in the 20th century. Named after the climactic Battle of Midway of June 1942, Midway was built in only 17 months, but missed World War II by one week when commissioned on September 10, 1945. Midway was the first in a three-ship class of large carriers that featured an armored flight deck and a powerful air group of 120 planes.

From the beginning of its service, the Midway played key roles in the Cold War. In 1946 it became the first American carrier to operate in the midwinter sub-Arctic, developing new flight deck procedures. The following year Midway became the only ship to launch a captured German V-2 rocket. The trial’s success became the dawn of naval missile warfare. Just two years after that, Midway sent a large patrol plane aloft to demonstrate that atomic bombs could be delivered by a carrier.

Midway served with the Atlantic Fleet for ten years, making seven deployments to European waters, patrolling “the soft underbelly” of NATO. A round-the-world cruise took Midway to the west coast in 1955, where it was rebuilt with an angled deck to improve jet operations.

Midway’s first combat deployment came in 1965 flying strikes against North Vietnam. Midway aircraft shot down three MiGs, including the first air kill of the war. However, 17 Midway aircraft were lost to enemy fire during this cruise. In 1966 Midway was decommissioned for a four-year overhaul. Over a chaotic two day period during the fall of Saigon in April 1975, Midway was a floating base for large Air Force helicopters which evacuated more than 3,000 desperate refugees during Operation Frequent Wind.

As potential threats to the Arabian oil supply grew, and to relieve strain on U. S.-based carriers, Midway transferred to Yokosuka, Japan, making it the first American carrier home ported abroad.

In 1990 Midway deployed to the Persian Gulf in response to the Iraqi seizure of Kuwait. In the ensuing Operation Desert Storm, Midway served as the flagship for naval air forces in the Gulf and launched more than 3,000 combat missions with no losses. Its final mission was the evacuation of civilian personnel from Clark Air Force Base in the Philippines after the20th century’s largest eruption of nearby Mount Pinatubo.

On April 11, 1992 the Midway was decommissioned in San Diego and remained in storage in Bremerton, Washington until 2003 when it was donated to the 501(c)3 nonprofit San Diego Aircraft Carrier Museum organization. It opened as the USS Midway Museum in June 2004. 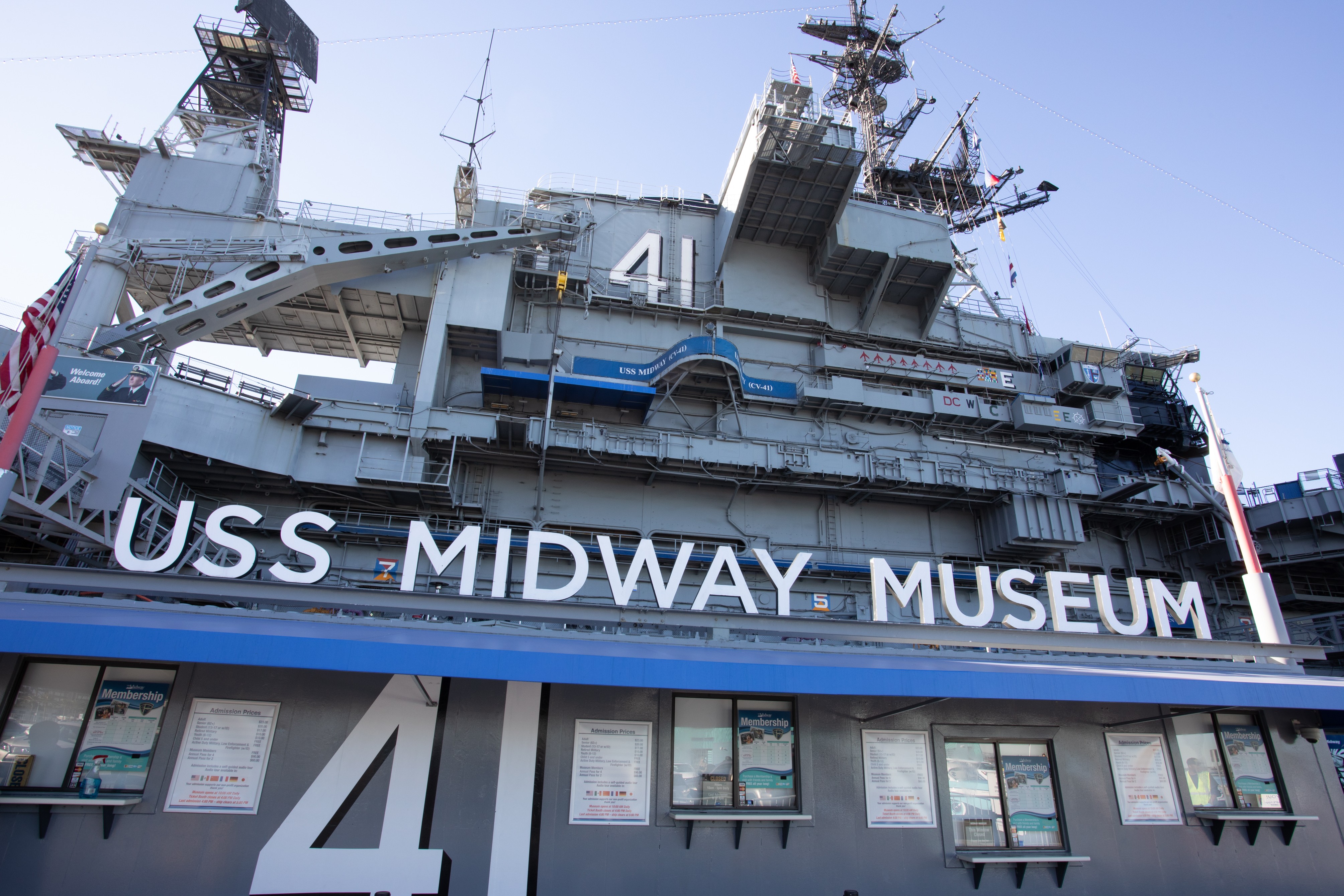