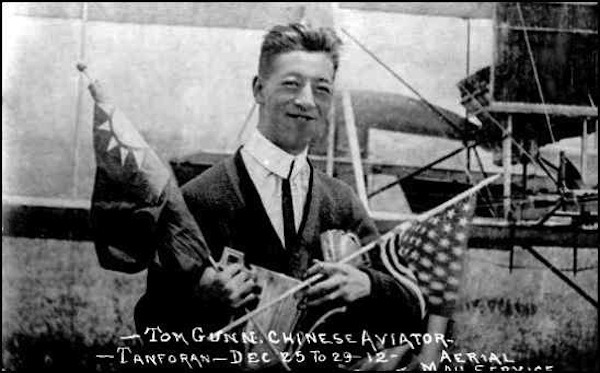 The Pacific Aviation Museum of Pearl Harbor, Hawaii is opening a new exhibit on Saturday July 13th. Entitled “Pacific Aviation Pioneers”, the inaugural exhibit will be on aviation daredevil and stunt pilot Tom Gunn and will also mark the debut of the remodeled Doolittle Gallery in Hangar 37, redesigned to host ongoing exhibits with flexibility and modern display technology. It is the first major change in Hangar 37 since the museum opened its doors in late 2006. 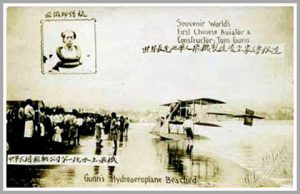 Tom Gunn, an aviation pioneer best known for introducing passenger flight to the people of Hawaii, was born in California in 1890, grew up in the Bay Area, and attended flight school in New York and the Los Angeles area. In June 1913, he was in Honolulu, giving Hawaii exhibitions of aviation daring, flying a 75 horsepower biplane at about 70 miles an hour.

“Tom Gunn was the first Chinese-American to hold a U.S. flying license, particularly significant to the people of Hawaii. We are proud to honor him and his family at our new exhibit opening,” said Museum Executive Director Kenneth DeHoff.

In the summer of 1913, bringing his barnstorming act to Hawaii, Gunn billed himself as “the nerviest Chinaman in the world,” performing a vaudeville show that included a mail-service demonstration, gliding with the engine switched off and a maneuver called the “Dip of Death.” The first airplane passenger in Hawaii was Lillian Gee, a young woman who sold tickets for the Empire Theatre, taken aloft by Gunn on July 13, 1913, at a demonstration near Schofield Barracks. Later that day, Gunn charged $25 to carry Hawaii’s first paying passenger, a Mrs. Newman of Honolulu. Both flights were carried out slowly and low to the ground so as not to frighten the ladies — but as Hawaii’s first aerial passengers, Miss Gee and Mrs. Newman made commercial aviation history.

When revolution in his China erupted, Gunn was contacted by Sun Yat-sen to popularize aviation. In two years, Gunn made more than 800 flights and carried more than 300 passengers in the Pacific region, including the Hawaiian Islands, where he also demonstrated the first flying boat seen here. 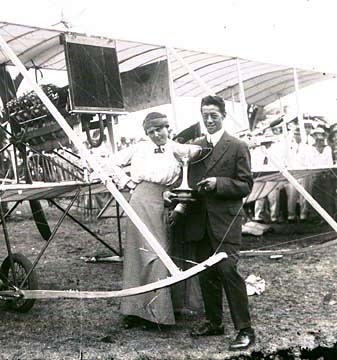 Sponsored by the Nippu Jiji, a Hawaiian Japanese-language newspaper, Gunn went on to the neighbor islands and the Philippines to inaugurate air-mail services before settling in China to fly for Sun Yat-sen. From Hawaii, Gunn went on to the Philippines and China, making more demonstration flights. His expertise so impressed Sun Yat-sen that the revolutionary leader placed him in charge of China’s fledgling air force.

Gunn died in a mysterious “rickshaw accident” in 1925 in China, possibly the target of assassination.

Tom Gunn is being honored as the first inductee in the ongoing Pacific Aviation Pioneers exhibit, a rotating series of exhibits which will highlight the personalities who created aviation history in the Pacific region. The schedule calls for at least four Pioneers or teams of Pioneers to be spotlighted every year. The opening ceremony and reception will be held in Hangar 37 from 3-4PM on July 13 and is included with museum admission.