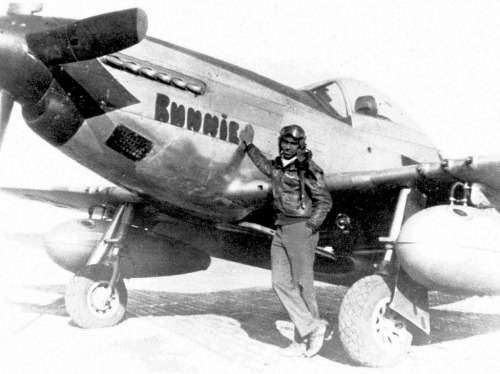 The Tuskegee Airmen were inducted into the International Air & Space Hall of Fame at the San Diego Air & Space Museum in 2008. Mr. Brown and fellow airman Lee Archer were on hand at the Museum and accepted the induction on behalf of all of the Tuskegee Airmen. The Museum’s North American P51D Mustang “Bunnie” is painted in honor of Brown and the Tuskegee Airmen. Lt. Col. (Ret.) Archer passed away at age 90 in 2010.Mr. Brown graduated from the Tuskegee Flight School on March 12, 1944 as member of class 44-C-SE and served in the U.S. Army Air Forces in Europe during World War II. During this period, Captain Brown shot down an advanced German Me-262 jet fighter and a FW-190 fighter.

Known as the “Red tails” because of their unit markings, the Tuskegee Airmen program officially began at the Tuskegee Institute, a highly-regarded university founded by Booker T. Washington in Tuskegee, Alabama. The Airmen, including ground support crews, were placed under the command of Capt. Benjamin O. Davis, Jr., one of the few African American West Point graduates. The Tuskegee Airmen saw their first combat mission in North Africa in 1943. They were initially equipped with P-40 Warhawks and P-39 Airacobras. Later they had P-47 Thunderbolts, and finally were given the airplane they would become most identified with, the P-51 Mustang. By the end of World War II, the Tuskegee Airmen achieved an impressive combat record, shooting down well over 100 German aircraft and receiving three distinguished unit citations. The Tuskegee Airmen were also awarded several Silver Stars, 150 Distinguished Flying Crosses, 8 Purple Hearts, 14 Bronze Stars and 744 Air Medals. Their valiant efforts lead the way to the desegregation of the armed forces in 1948.

On March 29, 2007, Brown attended a ceremony in the U.S. Capitol rotunda, where he and the other Tuskegee Airmen collectively, not individually, were awarded the Congressional Gold Medal in recognition of their service.Brown attended the segregated Dunbar High School and, infatuated after seeing Charles Lindbergh’s “Spirit of St. Louis” at the Smithsonian Institution, longed to become an aviator. Prior to his wartime service, Brown graduated from Springfield College, Springfield, Mass., where he was valedictorian of the Class on 1943.After the war, Brown resumed his education. His doctoral dissertation was on exercise physiology and he became a professor at New York University and President of Bronx Community College. In 1992, Brown received an honorary doctor of humanics degree from alma mater Springfield College.

Mr. Brown resided in Riverdale, New York. He was also a member, and past president, of the 100 Black Men of America New York Chapter. He was a professor of Urban Education at the CUNY Graduate CenterHe married the former Laura Jones. In addition to his son Dennis, he is survived by another son, Donald, and daughters Doris Bodine and Dianne McDougall. New York City Mayor Bill de Blasio ordered on Tuesday that the city and state flags be flown at half-staff in Dr. Brown’s honor until July 9 at sunset.

About The San Diego Air & Space Museum is California’s official air and space museum and education center. The Museum is an affiliate of the Smithsonian Institution and it was the first aero-themed Museum to be accredited by the American Alliance of Museums. Now showing: Da Vinci: The Ultimate Innovator, a special exhibition showcasing more than 90 robotics, machines and artworks from the greatest inventor of all time. The Museum is located at 2001 Pan American Plaza, Balboa Park, San Diego, CA 92101. The Museum and gift store are open daily from 10:00 a.m. to 5:00 p.m. with admissions until 4:30 p.m. Closed Thanksgiving Day and Christmas Day. Visit www.sandiegoairandspace.org