As part of their celebrations for the 75th anniversary of VE Day, albeit somewhat muted given the current pandemic, the Royal Air Force Museum has illuminated Spitfire Mk.I K9942 in red, white and blue at their RAF Cosford campus. This Spitfire, the oldest surviving example of its breed, first flew from Supermarine’s plant in Eastleigh on April 21st, 1939. Three days later, she joined No. 72 Squadron, at RAF Church Fenton. The legendary James Nicolson was one of her regular pilots during K9942’s time with 72 Squadron.

Nicolson became the only RAF Fighter Command pilot to receive the Victoria Cross, Britain’s highest military honor. He earned this honor on August 16th, 1940 during the height of the Battle of Britain. With his Hawker Hurricane ablaze, and badly wounded by cannon shell splinters, Nicolson elected to return to his burning cockpit, after having made preparations to bail out, when an enemy fighter presented itself before his guns. He fired at the Bf 109 until he’d shot it down, and only then did exit the Hurricane, by now suffering serious burns to his hands, legs and face. As he descended on his parachute, he endured further indignity when members of the Home Guard fired upon him with their rifles, thinking him an enemy paratrooper. Thankfully, Nicolson avoided further injury, and recovered from his wounds sufficiently by late 1941 for a return to flying duties. He flew Beaufighters over Burma, adding a Distinguished Flying Cross to his awards, but his luck eventually ran out, sadly. Nicolson lost his life in a flying accident on May 2nd, 1945. The RAF 355 Squadron Liberator which he had been flying in as an observer caught fire and crashed over the Bay of Bengal.

K9942 flew numerous combat sorties, racking up over 40 hours on operations, including combat over Dunkirk during the evacuation. A wheels-up forced landing at Gravesend on June 5th, 1940 ended her front line career. Following repairs, K9942 returned to service in training squadrons. At the end of her flying career, in mid-1944, the aircraft had nearly 1,100 hours flying time, quite a feat considering that most such fighters never came even close to that number. Interestingly, the RAF allocated K9942 for museum storage in August, 1944, recognizing the aircraft’s significant history. She has served in various ceremonial roles over the eight decades since that time, and is presently on display at RAF Museum Cosford in Shropshire wearing her 72 Squadron colors.

The Royal Air Force Museum announced that they are joining forces with the National Army Museum and the National Museum of the Royal Navy to host their first tri-service celebration with a Virtual VE Day 75 Festival taking place online from 7-9 May 2020, bringing to life the stories of those who helped deliver Victory in Europe. 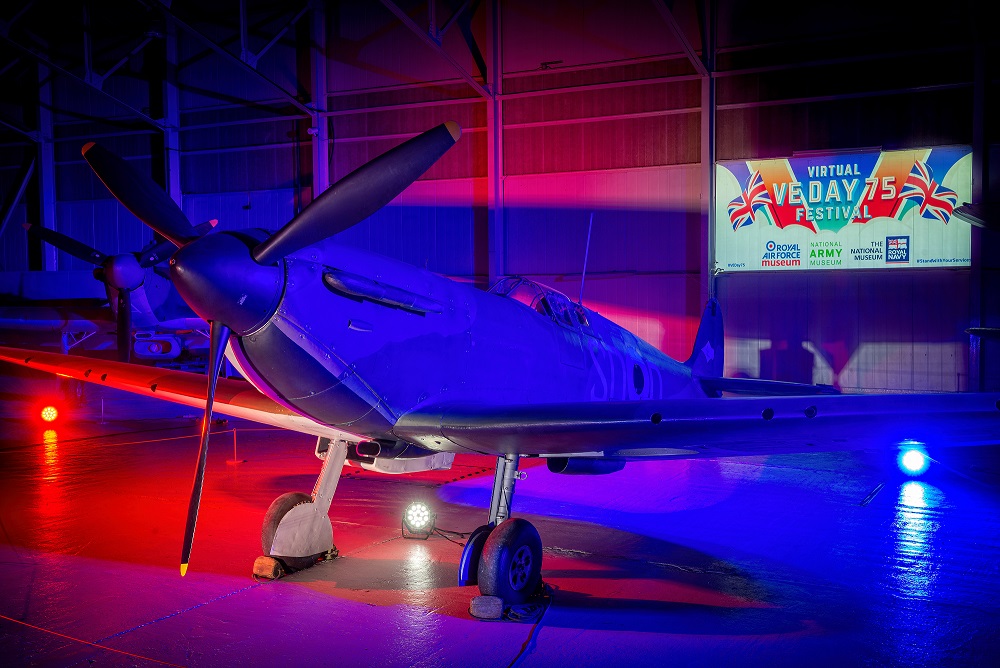 To find out more about the Virtual VE Day 75 Festival please visit rafmuseum.org.