Just a few days ago, on February 9th, a rare and freshly restored WWII dive bomber rose high above the ground on cables to its new display station in the atrium at the National Museum of the Marine Corps in Triangle, Virginia. Douglas SBD-3 Dauntless Bu.06583 is a genuine US Marine Corps example, having served with VMSB-132 in Hawaii just prior to that unit’s deployment to Henderson Field on Guadalcanal in November, 1942. Quite how fate intervened to prevent the 06583 from making the journey into the combat zone with the rest of her squadron remains a mystery we’ll probably never solve, as her maintenance logs no longer exist. However, the restoration team did discover evidence of wartime repairs that might have resulted from a contemporary accident, thus delaying the aircraft’s readiness for war. What we do know is that by 1943 the SBD was back on the US mainland helping to train young pilots in the art of aircraft carrier operations. On October 30th that year, 06583 ditched in Lake Michigan following an accident while flying with a trainee pilot from the USS Wolverine.

Long forgotten over the half century following its loss, interest in the sunken dive bomber returned by the early 1990s when barely a handful of SBD’s survived in preservation. A&T Recovery Inc. raised the Dauntless from her lake bed grave in 1991, and she went through a cursory restoration at the National Naval Aviation Museum in Pensacola, Florida, going on display suspended from the rafters by 1997. When a combat veteran SBD became available for display, the Naval Aviation Museum loaned 06583 to the USS Alabama Battleship Memorial in Mobile, Alabama in 2005. Unfortunately, that museum was hit by the severe effects of hurricane Katrina, and some of her exhibits were transferred to other facilities (thankfully the well-loved museum has fully recovered now). The Dauntless eventually made her way to the National Museum of the Marine Corps in 2007. While the museum did have a representative airframe at the time, it was actually a US Army Air Force version, A-24B Banshee 42-54582, so acquiring a genuine Dauntless with a Marine Corps history was a major coups. Their A-24, surplus to requirements, moved on to the National Museum of the US Air Force in Dayton, Ohio, which bizarrely had an SBD on display masquerading as a Banshee at that time! 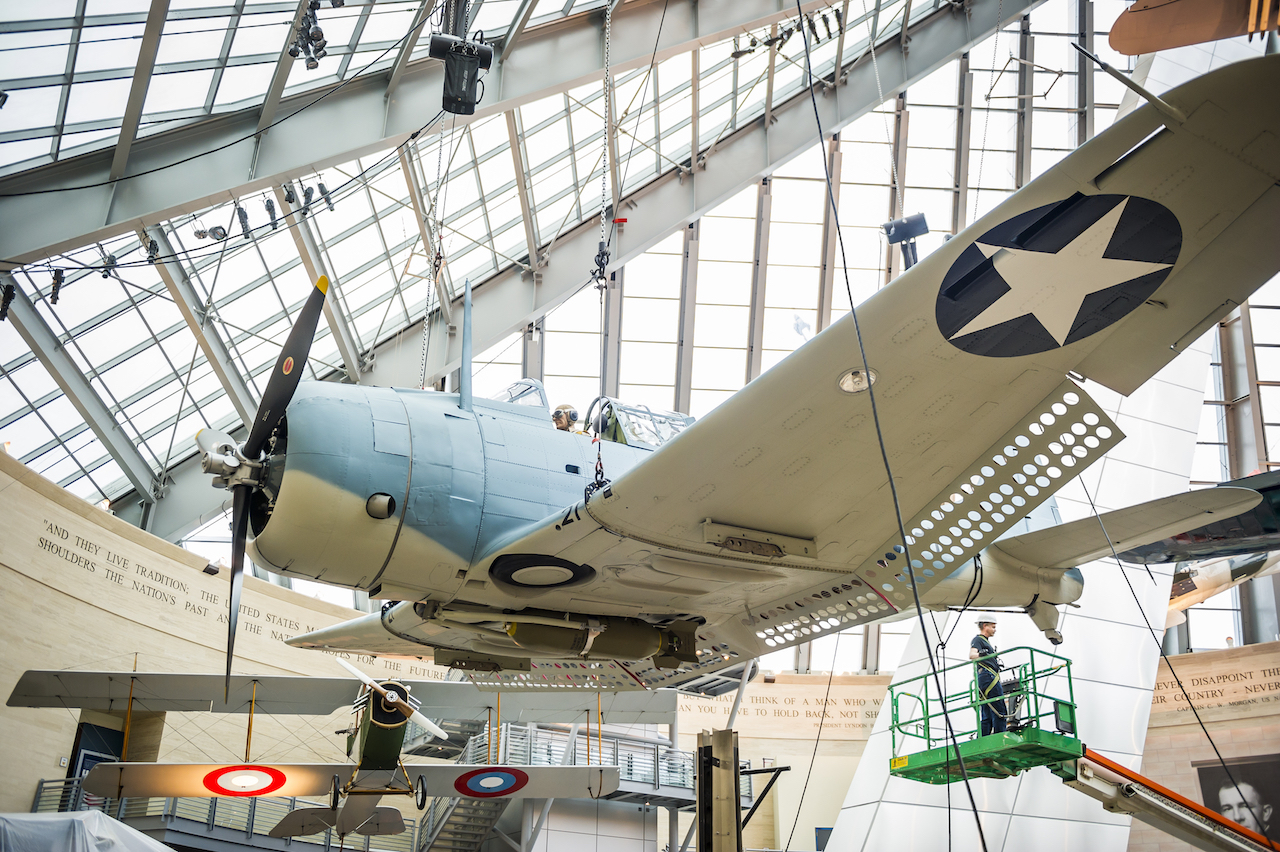 The National Museum of the Marine Corps then set about a more thorough restoration of their newly-acquired SBD-3. The fuselage work took place in house, whereas the wings were done elsewhere. The restoration stalled more recently, when the workshop suddenly became unavailable for use due to unpublished reasons. Thankfully, the Smithsonian’s National Air & Space Museum offered the Marine Corps space to complete the work in their restoration hangar at the Udvar-Hazy Center in Chantilly, Virginia. They completed the project at that site, including fully repainting the aircraft. They have marked the Dauntless to represent a VMSB-232 example flown by the squadron’s commanding officer, Maj. Richard C. Mangrum, and Cpl. Dennis E. Byrd on August 25th, 1942 during the Guadalcanal Campaign. Once the Dauntless was finished, they disassembled the aircraft into its major subcomponents and drove it the thirty odd miles to Triangle, Virginia for installation. The Dauntless is now raised in the air, poised as if in an attack, with nose sharply down, and dive brakes deployed. The National Museum of the Marine Corps has been undergoing some serious remodeling itself, and will re-open in the coming weeks when the general public will finally be able to see the newly-restored Dauntless.

This work, The Raising of a War Machine [Image 1 of 31], by Kathy Reesey, identified by DVIDS, is free of known copyright restrictions under U.S. copyright law.