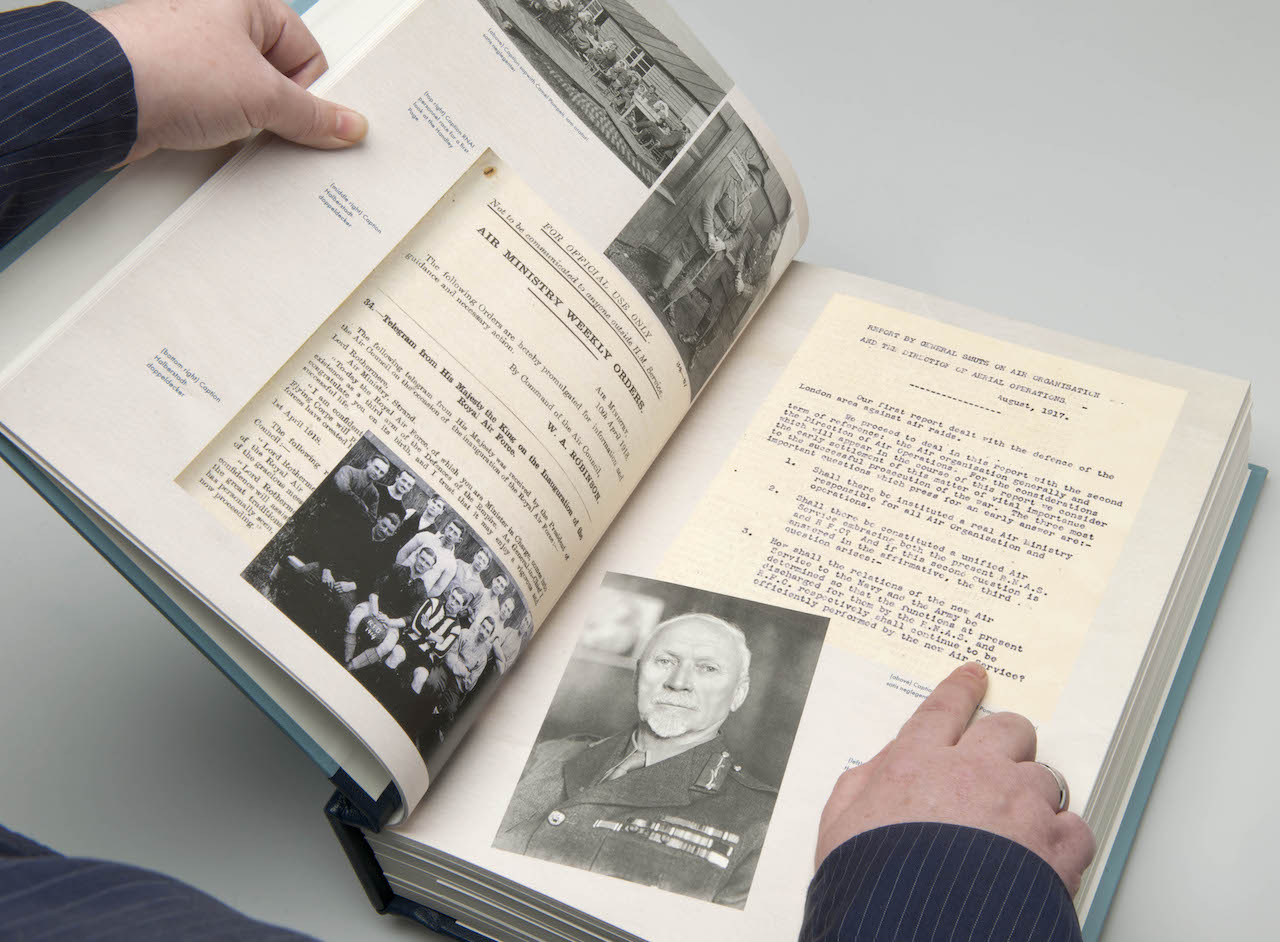 The RAF Museum is proud to announce the launch of the RAF Centenary Anthology, a handmade, limited edition of 1,500 books of which 250 are signed exemplary copies.Forged in the crucible of the First World War, the Royal Air Force will commemorate its Centenary on 1 April, 2018.The story of the RAF has shaped the modern world. By inspiring technological development, pioneering cultural change and pushing the boundaries of human achievement, the RAF has touched the lives of millions around the globe

This new anthology, produced by award-winning specialist publishers Extraordinary Editions in association with the RAF Museum, will commemorate a hundred years of service and sacrifice, courage and honour whilst celebrating the spirit and values of the people who have contributed to the RAF Story.A donation from all sales will be made to the RAF100 Appeal supporting the RAF Association, Charitable Trust, Benevolent Fund, Museum and the Royal Air Force.The RAF Commemorative Anthology will consist of at least 650 pages of documents, orders, operational reports, maps, air diagrams, diaries, letters and ephemera, recording RAF life over its first 100 years. It will measure an impressive 39 x 27 cm, in order that original documentation can be reproduced at full size.From General Smut’s memorandum on the need for an air force to the latest air actions, the book presents both a history of the Service and a series of fascinating glimpses into RAF life, operations and policy. Among the many extraordinary documents included in the book are the leaflet dropped over German lines telling them of Von Richthofen’s death, the tragic last written note from Arthur Aaron VC and the secret clandestine letters from an imprisoned Douglas Bader. A team based at the RAF Museum has been working over the last year, identifying and assessing material and photographs from the RAF Museum archives and the Air Historical Branch in order to create the ultimate documentary history of the Service. There will be a specially written introduction to each chapter and extensive footnotes throughout to guide the reader. 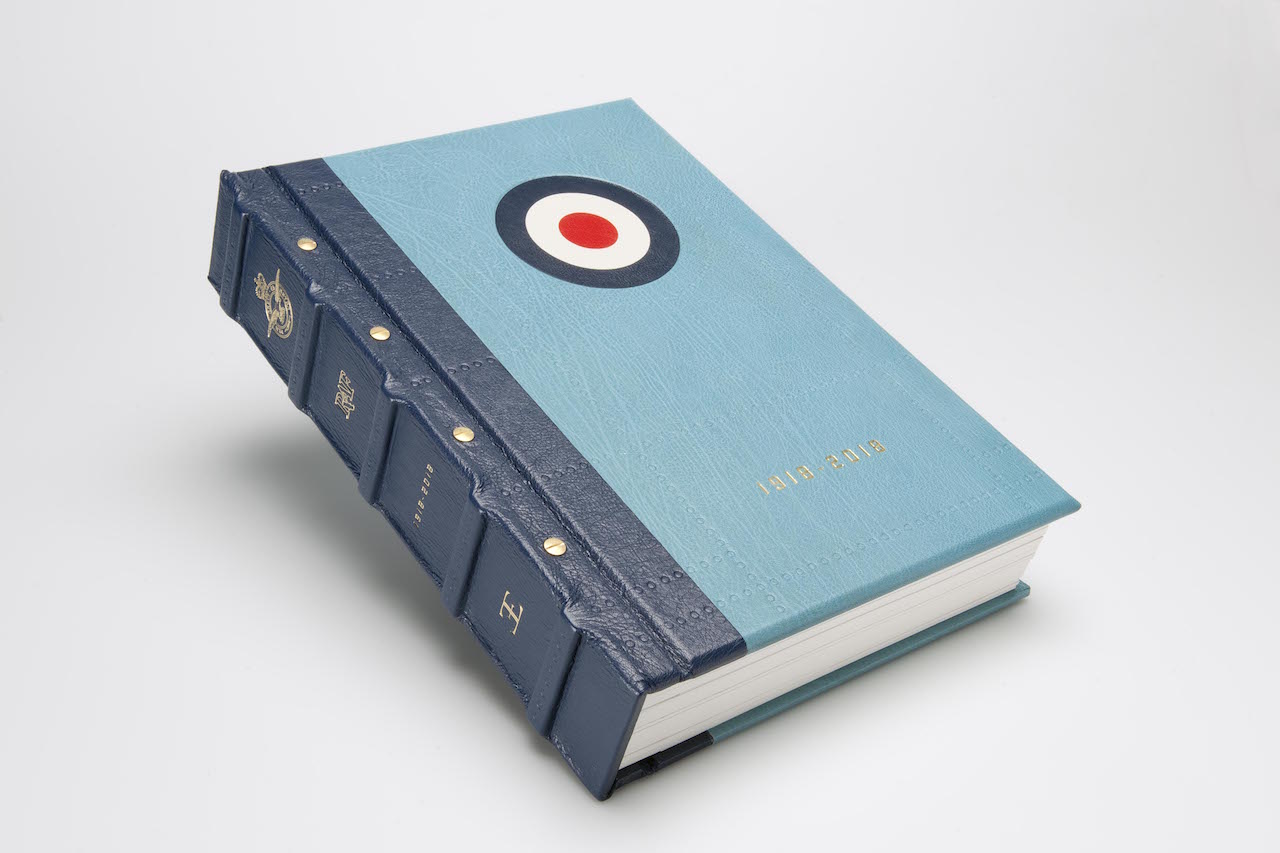 All the documents and images will be scanned at ultra-high resolution to ensure the best possible reproduction and the book will be printed on a specially made, acid free, archival quality paper.The Centenary Edition will be hand bound on brass posts in quarter leather over reinforced boards, with a book cloth cover depicting the roundel and a pattern of rivets reminiscent of a wing section. Each copy will come in a die cut slip-case revealing the roundel. This edition is limited to 1,250 copies.The Signed Exemplary Edition will be limited to just 250 copies published in 5 different versions, each representing an iconic aircraft and signed by three pilots or crew from that aircraft: the Spitfire, the Lancaster, the Vulcan, the Harrier and the Tornado. In addition they will contain extra material about each specific aircraft. Each of the Signed Exemplary Editions will be hand-bound in full leather using RAF colours, with the roundel of the cover inlaid in leather, and presented in a specially made solander box.

This Anthology is now offered at a special subscriber discount to members of the RAF and the RAF charities. Members can secure a copy by completing the subscriber form and sending a deposit. Once sufficient subscriptions have been received the book will go into production with delivery planned for early 2018 in time for the anniversary. All subscribers will have their names listed in the book.The entire edition set is limited to just 1500 copies worldwide and books will be allocated on a strictly first come first served basis. Members who wish to purchase a copy are urged to do so as soon as possible as any unsubscribed copies will be made available to the public from June 2017 at full price at which point this subscriber offer will close.

The Centenary Edition is available to subscribers at £750 [rrp £950]

For more information or to register your interest please email: