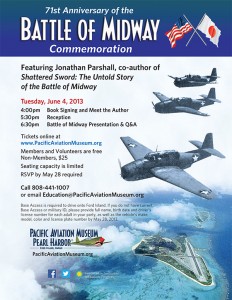 The event is free to museum members and $25 for non-members. It will feature a Book Signing and a “Meet the Author” session at 4PM, a Reception at 5:30PM, and a “71st Anniversary of the Battle of Midway” presentation by Mr. Parshall at 6:30PM after which he will answer questions of the attendees.

Jonathan Parshall has written for the U.S. Naval War College Review, Naval Institute Proceedings, and World War II magazine, and has contributed to several books on the topic. In 1995 he founded www.combinedfleet.com, the foremost English language site on the Japanese Imperial Navy.

Tickets for this event are available to be purchased online at PacificAviationMuseum.org