Joining the Naval Reserve to help pay for attendance at Ohio State University, Jesse Brown was discouraged from applying for aviation duty. Overcoming the prejudices of the era, he qualified for flight instruction as part of the Aviation Midshipman Program in 1947. The following year, ENS Jesse L. Brown became the first African-American to complete the Navy’s flight training program. Assigned to the VF-32 Swordsmen, he flew vital close air support missions from USS Leyte (CV 32) supporting embattled Marines in the Chosin Reservoir during the Korean War. Hit by enemy fire during a mission on December 4, 1950, ENS Brown skillfully crash-landed his stricken F4U Corsair, the impact damaging the fuselage and pinning him in the cockpit. Stoically enduring tremendous pain and bitter cold during a sadly unsuccessful rescue attempt by his squadronmate, LTJG Thomas Hudner, ENS Brown’s last words were a message for his wife — “Tell Daisy I love her.” ENS Brown offers an inspirational example of heroism and determination in the face of adversity. 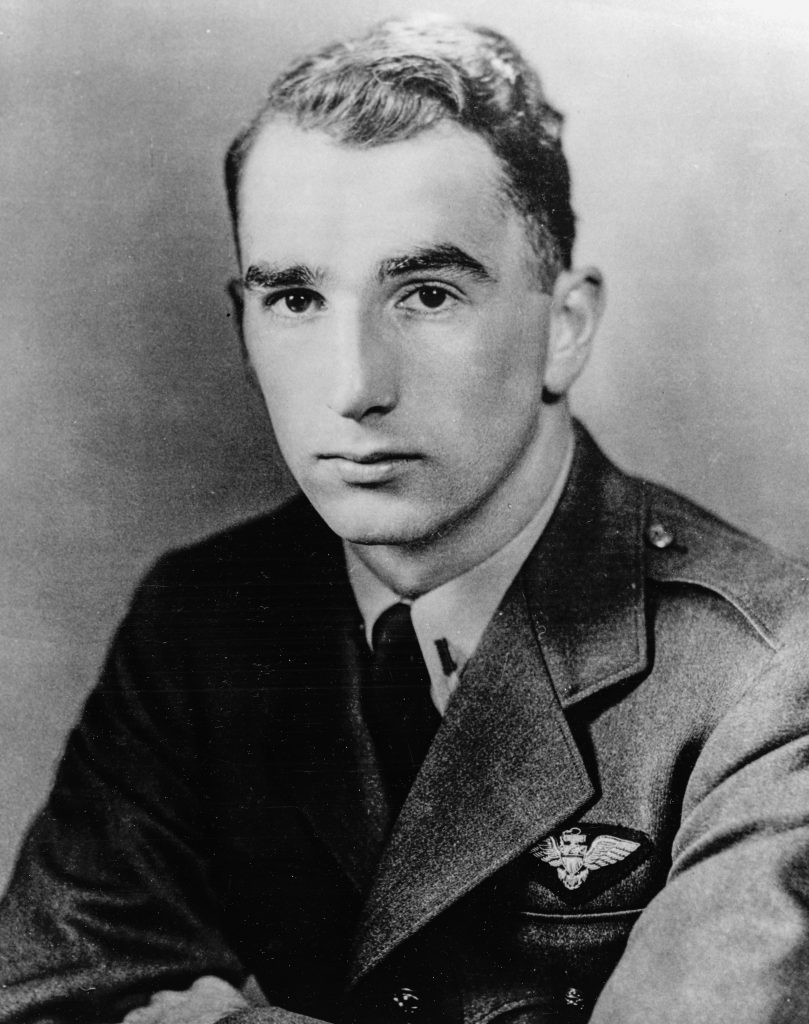 Unhesitatingly volunteering for a dangerous rescue mission deep in North Korea despite approaching darkness, LTJG John K. Koelsch’s Sikorsky HO3S helicopter was shot down by intense enemy fire on July 3, 1951. Surviving the crash, Koelsch evaded capture for nine days along with his aircrewman and the severely burned Marine aviator they had attempted to rescue. Following his capture Koelsch maintained an indomitable spirit in the face of harsh conditions and mistreatment in a prisoner of war camp, before dying in captivity on October 16, 1951. The first helicopter pilot in U.S. military history to receive the Medal of Honor, his intrepidity, devotion to duty and inspirational leadership continue to inspire generations of rotary-wing aircrew. 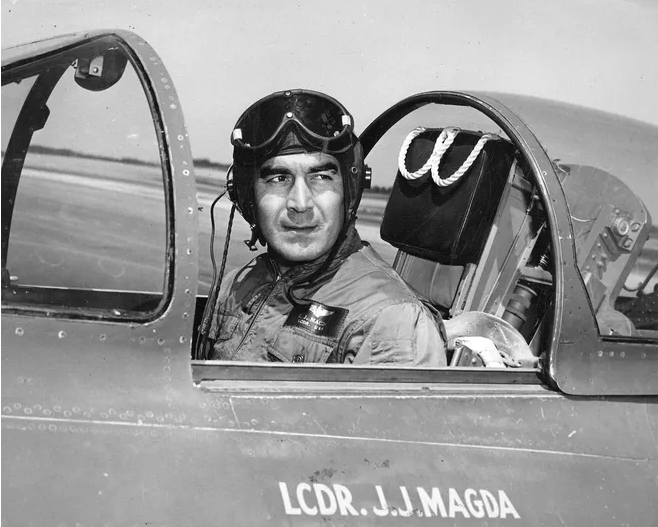 After serving in the Battle of Midway, LCDR John J. Magda flew F6F Hellcats and shot down five Japanese aircraft to become an ace. Following WWII, Magda became the fourth leader of the U.S. Navy’s famed Blue Angels aerial demonstration team, leading them through their transition into jet-powered aircraft. When the team disbanded to form the nucleus of a front-line squadron, VF-191 Satan’s Kittens, Magda commanded that unit aboard USS Princeton (CV 37) during their time in combat over Korea, flying dangerous low-level missions. During a March 9, 1951 strike against a heavily defended target, Magda pressed home the attack despite his aircraft being in flames before crashing into the sea. Magda received the Navy Cross posthumously for his extraordinary heroism. Magda was an aviator whose undaunted courage and inspirational leadership left a lasting legacy for Naval Aviation and the Navy Flight Demonstration Squadron. 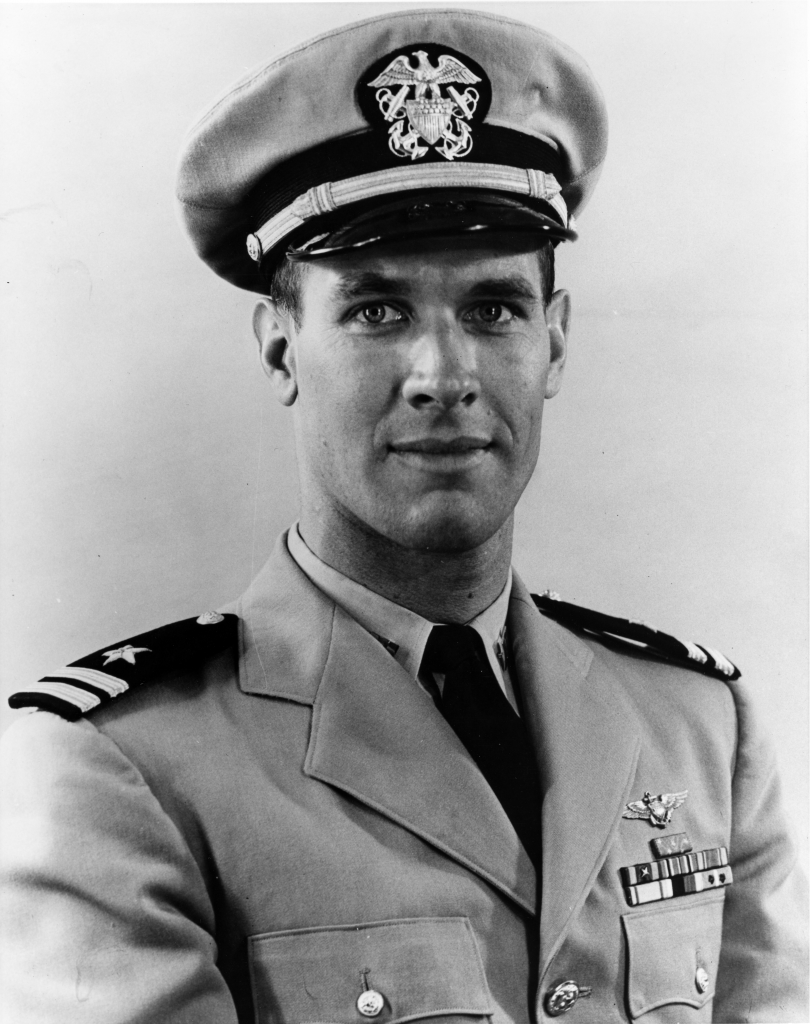 Designated a Naval Aviator in 1949, Captain Hudner then joined VF-32 Swordsmen, flying F4U-4 Corsairs from USS Leyte (CV 32). During a mission over North Korea on December 4, 1950, he observed his squadronmate ENS Jesse Brown make a forced landing in the rugged, icy landscape of the Chosin Reservoir. Seeing him make no effort to get out of the Corsair’s cockpit despite a fire burning in the aircraft’s nose section, then-LTJG Hudner intentionally made a wheels-up landing near Brown’s airplane, despite the presence of enemy troops in the area. Packing snow on the fuselage to combat the flames, he discovered that Brown was pinned in the cockpit by a collapsed instrument panel. Calling in a rescue helicopter, he then doggedly tried, albeit unsuccessfully, to extricate Brown from the stricken Corsair amidst gathering darkness and bitter cold. For his extraordinary valor, Hudner received the Medal of Honor, his actions that day and in preserving the memory of his comrade in arms embodying selfless devotion.

The National Naval Aviation Museum is the world’s largest naval aviation museum and one of the most-visited museums in the state of Florida. Share the excitement of Naval Aviation’s rich history and see more than 150 beautifully restored aircraft representing Navy, Marine Corps, and Coast Guard Aviation. These historic and one-of-a-kind aircraft are displayed both inside the Museum’s over 350,000 square feet of exhibit space and outside on its 37-acre grounds. For more information, visit www.navalaviationmuseum.org