The National Warplane Museum of Geneseo, New York is planning to bring their Veteran Douglas C-47 Skytrain back to Normandy, France to mark the 70th anniversary of when this very plane dropped paratroopers on the beach on D-Day.

The Douglas C-47 Skytrain/Dakota was the cargo aircraft which was the workhorse of the US Army Air Force during World War II. It was also affectionately known as the “Gooney Bird” and served in all theaters of the war.

The National Warplane Museum’s C-47 is an actual WWII veteran. This aircraft originally served with the 12th Air Force in the Mediterranean Theater in 1943 and the 9th Air Force in England 1944-1945 as part of the 316th Troop Carrier Group. It was one of the lead aircraft of the first strike of the D-Day invasion on June 6th, 1944 over Normandy, France. It transported paratroopers for the 82nd Airborne Division as part of Operation Neptune. 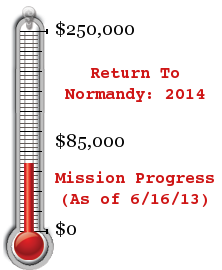 The museum intends to travel to France for the 2014 D-Day Reunion and “Liberty Jump Team,” friends of the Warplane Museum, will actually re-enact a 2:00AM paratroop jump, corresponding to the planes mission on that historic day. The museum’s estimate for the trip is approaching $250,000. To raise this amount they are launching a direct mail campaign. Information on the museum, the plane, and the commemoration are all available at the museum’s website.