On 1 February 2022, the National Naval Aviation Museum was honored to receive the donation of a historic Torrotito flag, a banner which last flew over the Spanish aircraft carrier Dédalo during 1989 upon her return to the United States. Dédalo had previously served with the U.S. Navy as USS Cabot (CVL 28), receiving the Presidential Unit Citation for actions during World War II. The Spanish Navy acquired the ship in 1967 following her decommissioning from the American fleet. With the Armada Española (Spanish Navy), the carrier logged an further 30,000+ aircraft launches and recoveries.
Members of the Order of Granaderos y Damas de Gálvez facilitated this special donation. Representatives presenting the flag were Dan and Nancy McCort, Ms. Nan Harper, and sisters Mrs. Molly Long Fernandez de Mesa and Ms. Anthony Long Startz. The Long sisters’ father, Mr. Don Long, served aboard Cabot during her stay at Pensacola in the 1950s, while Molly’s husband Luis later served aboard Dédalo as a pilot with the Spanish Navy after completing flight training in Pensacola.

The second Cabot (CVL 28) was laid down as the light cruiser Wilmington (CL 79) on 16 March 1942 at the New York Shipbuilding Co. in Camden, New Jersey. On June 2nd, 1942, the ship was reclassified as an aircraft carrier (CV 28), receiving the new name of Cabot a few days later on June 23rd. Her conversion from light cruiser to carrier took place during her construction, with the launch taking place on 4 April 1943 (sponsored by Mrs. A.C. Read). Reclassified as a light aircraft carrier (CVL 28) on 15 July 1943, the ship was commissioned into the U.S. Navy on 24 July 1943, with Capt. M.F. Shoeffel in command. 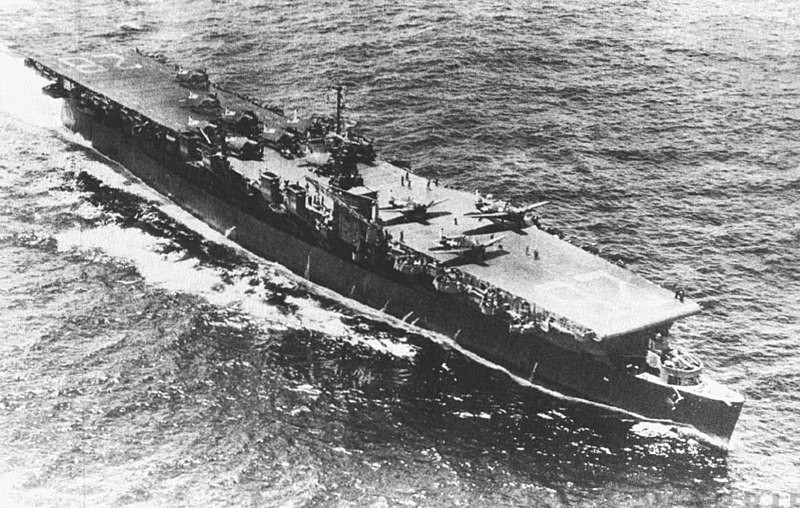 Cabot sailed from Naval Air Station (NAS) Quonset Point, Rhode Island for Pearl Harbor, Hawaii on 8 November 1943; she arrived on 2 December. Clearing for Majuro in the Marshall Islands on 15 January 1944, she joined Task Force 58 to begin the consistently high quality of wartime service which was to win her a Presidential Unit Citation. From 4 February to 4 March 1944, Cabot launched her planes in strikes against Roi, Namur, and the island stronghold of Truk in the Carolinas, helping to neutralize these Japanese bases as her part in the invasion of the Marshalls.

Cabot then returned to Pearl Harbor for a brief period of repairs and resupply; she was back in action from Majuro for raids on the Palaus, Yap, Ulithi, and Woleai at the close of March, 1944. She then sailed to help provide air cover for the Hollandia operation (22–25 April) and, four days later, began to hurl her air power at Truk, Satawan, and Ponape. She cleared Majuro again on the 6th of June for the pre-invasion air strikes in the Marianas, and during June 19 and 20, she launched sorties in the key Battle of the Philippine Sea, the famous “Marianas Turkey Shoot,” which hopelessly crippled Japanese naval aviation. Cabot’s aircraft pounded Japanese bases on Iwo Jima, Pagan, Rota, Guam, Yap, and Ulithi as the carrier continued her support of the Marianas operation until 9 August.

Pre-invasion strikes in the Palaus in September 1944, along with air attacks on Mindanao, the Visayas, and Luzon paved the way for the long-awaited return to the Philippines. On 6 October, Cabot sailed from Ulithi for raids on Okinawa, and to provide air cover for her task group during the heavy enemy attacks off Formosa [Taiwan] (12–13 October). Cabot joined the group which screened “Cripple Division 1,” heavy cruiser Canberra (CA-70) and Houston (CL-81), which had been torpedoed off Formosa, to the safety of the Carolines, then rejoined her group for continued airstrikes on the Visayas, and the Battle for Leyte Gulf (25–26 October).

Cabot remained on patrol off Luzon, conducting strikes in support of operations ashore, and repelling desperate, kamikaze suicide attacks. On 25 November a particularly vicious attack took place; Cabot had fought off several kamikazes when one of these aircraft, already aflame, crashed onto the flight deck on the port side, destroying the still-firing 20-millimeter gun platform, disabling the 40-millimeter mounts and a gun director, not to mention taking the lives of many American sailors manning those positions. Another of Cabot’s victims crashed close aboard and showered the port side with metal fragments and burning debris. Cabot lost 62 men killed and wounded, but careful training had produced a crew which handled damage control smoothly and coolly. While she continued to maintain her station in formation and operate effectively, temporary repairs took place. On 28 November she arrived at Ulithi to undergo more permanent repairs.

Cabot returned to action on 11 December 1944, steaming with the force striking Luzon, Formosa, Indochina, Hong Kong, and the Nansei Shoto in support of the Luzon operations. From 10 February to 1 March 1945, her planes pounded the Japanese homeland and the Bonins to suppress opposition to the invasion of Iwo Jima. Continued strikes against Kyushu and Okinawa in March prepared for the invasion of the latter island. After these prolonged, intensive operations, Cabot was homeward bound for San Francisco, California, for a much-needed overhaul (completed in June).

After refresher training at Pearl Harbor, the carrier launched strikes on Wake Island on 1 August while en route to Eniwetok. Here she remained on training duty until the end of the war. Sailing on 21 August, she joined Task Group 38.3 to support the landings of occupation troops in the Yellow Sea area in September and October. Embarking homeward-bound men at Guam, Cabot arrived at San Diego on 9 November, then sailed for the east coast. Cabot was placed out of commission in reserve at Philadelphia, Pennsylvania, on 11 February 1947.

Recommissioned on 27 October 1948, Cabot was assigned to the Naval Air Reserve training program. She operated out of Pensacola, Florida, then NAS Quonset Point, on cruises to the Caribbean, and had one tour of duty in European waters (9 January–26 March 1952). Cabot was again placed out of commission in reserve on 21 January 1955, and on 15 May 1959, reclassified to an auxiliary aircraft transport (AVT-3).

Cabot was loaned to the Spanish Navy on 30 August 1967, gaining the new name Dédalo (R.01). She was thus stricken from the Naval Vessel Register on 1 August 1972 and sold to the Spaniards. She continued in service with that fleet until she was stricken a second time, in August 1989. Returned to the United States, attempts to preserve her as a floating museum and a war memorial eventually fell apart and, sadly, she was broken up and scrapped in 2002. The National Naval Aviation Museum at NAS Pensacola, Florida, built a replica of her island and part of the flight deck, using the ship’s original plans. In addition to the Presidential Unit Citation, Cabot received nine battle stars for World War II service.