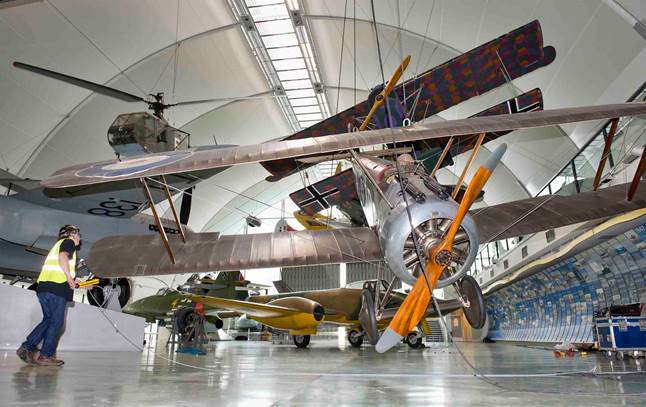 A restricted number of media are being allowed to cover the suspension of the Museum’s First World War Sopwith Camel as it happens on the morning of Thursday 2nd October.The Sopwith Camel is perhaps the most famous and iconic aircraft to take to the skies during the First World War. It was also made famous as the aircraft of choice by the fictional hero Biggles.This aircraft is to be a feature of a major new exhibition, opening in December 2014 which will allow museum audiences to discover and explore the unique and often overlooked role of air power during the First World War through the incredible stories of the men and women who took part. The exhibition ‘First World War In The Air’, was made possible with a grant of £898,558 from the Heritage Lottery Fund (HLF).

Back in July , the staff at Royal Air Force Museum Cosford received three iconic WWI aircraft. They will form the centre of a new First World War Exhibition. The Bristol M1c, Sopwith 1 ½ Strutter and Sopwith Pup are due to go on display within the museum’s War Planes Hangar in December 2014. The Sopwith Pup, serial N5182, is an original aircraft which was active during the First World War. The Pup, thought of by its pilots as the perfect flying machine, served extensively with the Royal Naval Air Service and the Royal Flying Corps both at home and abroad. The Bristol M1c and Sopwith 1 ½ Strutter are accurate, full-scale reproductions.

Members of the media will receive exclusive access to view the aircraft suspension and will be able to interview a range of technicians, aviation historians and exhibition team members.