Today, Roswell International Air Center is a sleepy airport in southeastern New Mexico upon which are parked numerous jetliners that have been mothballed or are being broken up for salvage. Located three miles south of the central business district of the City of Roswell in Chavez County, New Mexico, the airport has a unique place in American history.

The Genesis of Roswell Army Airfield

Initially known as Roswell Army Airfield, the property upon which the base was developed was acquired in 1941 from rancher David Chesser. Owing to its excellent flying weather, the purpose of the facility was to provide military flight training and also to serve as a bombardier school. The facility had no less than 4,600 acres along with seven concrete runways. Roswell Army Airfield was complemented by no less than nine auxiliary landing fields to accommodate overflow and tough and go traffic, and the airfield was assigned to the United States Army Air Corps Training Command on September 20, 1941.

The 509th Composite Group was activated on December 17, 1944 at Wendover Army Airfield in Utah. It was tasked with operational deployment of nuclear weapons dropped on Hiroshima and Nagasaki, Japan in August 1945. The Group contained squadrons of B-29s, C-47s and C-54s. It operated Silverplate B-29s specially configured to carry nuclear weapons.

By January 1954, the Boeing KC-97 Aerial Tanker had replaced the KB-29M aircraft, and the Wing entered the jet age in 1955 receiving the first jet bomber, the Boeing B-47 Stratojet.

A Victim to Base Closing During the Vietnam War

In 1967, the Base was ordered shut down and operations ceased July 1, 1967. Little remains today to remind visitors of the history enjoyed by this former military base. From 1941 to 1942, it was known as Roswell Army Flying School. From 1942 to 1947, it was known as Roswell Army Air- field. From 1947 to 1948, it was known as Roswell Air Force Base. From 1948 until closure in 1967, it was known as Walker Air Force Base. The last name of the facility was in honor of General Kenneth Newton Walker, a native of Los Cerrillos, New Mexico, who was killed during a bombing mission over Rabaul, New Britain, Papua, New Guinea on January 5, 1943. After his group scored direct hits on nine Japanese ships, General Walker’s aircraft was last seen leaving the target with one engine on fire and several Japanese fighters on its tail. For his gallantry, General Walker was awarded the Congressional Medal of Honor posthumously by President Franklin D. Roosevelt in 1943.

As one walks about the campus of this former military field, the old control tower is still standing as are a number of aircraft hangars, office buildings and maintenance shops. Although the City of Roswell has placed a new fire station on the field, the general appearance of the facility is that of a run- down former military air base, the significance of which is now lost on most Americans. The airfield is littered with what appears to be hundreds of aging jetliners, some in storage and some being broken up for salvage. In short, the old Roswell Army Airfield is now an airplane bone yard.

Two Americans who have not lost their reverence for the historical significance for this closed military facility are Johnny Stites and his wife, Maralea. Mr. and Mrs. Stites maintain the Walker Aviation Museum in the terminal building of the airport. This modest museum is adorned with aviation artifacts and models of military aircraft to pay homage to those who died ensuring and protecting our freedoms during the Second World War and thereafter. Admission to the museum is free, and there is a grill next door to the museum. High above the tables which serve the grill is a large model of a B-29 Superfortress.

If your travels ever take you near Roswell, New Mexico, you might consider a visit to the Walker Aviation Museum and this closed military facility in southeastern New Mexico. 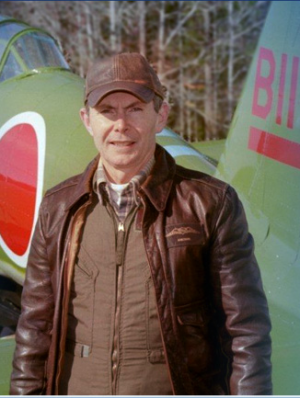 Alan Armstrong is an aviation lawyer in Atlanta. He is listed in Martindale Hubbell’s publication of Preeminent Lawyers. Alan has spoken frequently on topics of aviation law to pilots and aviation groups. He has testified before the House Aviation Subcommittee and conducted a mock trial at Sun-N-Fun. A commercial pilot with flight instructor privileges, Alan has flown a number of vintage aircraft. Along with two other pilots, Alan owns and flies a replica Nakajima B5N2 Kate bomber, and he is a pilot in the Dixie Wing of the Commemorative Air Force. The replica Kate bomber was built for  and flown in the 20th Century Fox film, “Tora! Tora! Tora!” More details on that aircraft may be found at www.japanesebomber.com.