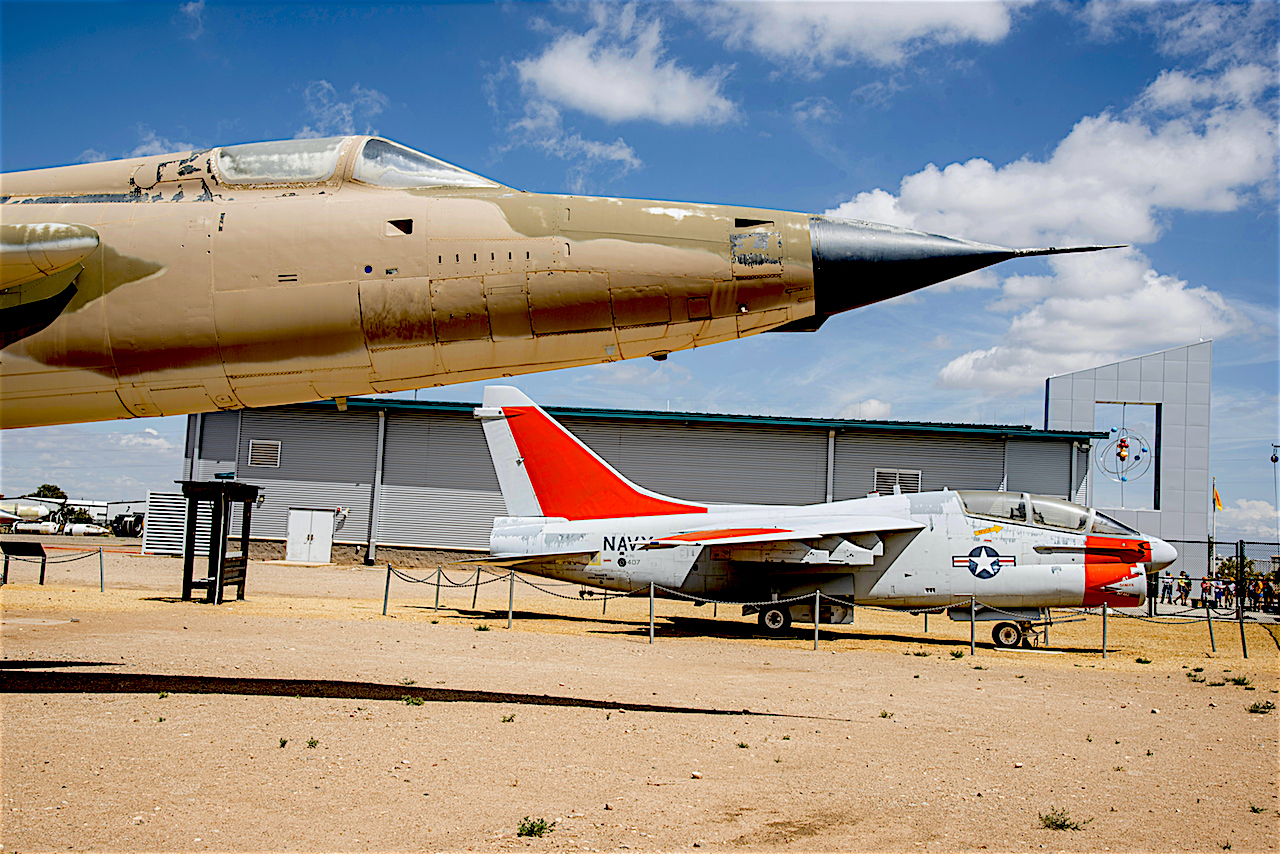 Albuquerque, NM – The National Museum of Nuclear Science & History is taking on an ambitious project, the restoration of not one, but two Cold War Jet Fighters. Having found previous success on a 2015 campaign to restore their B-29, the Nuclear Museum hopes to fundraise enough to restore their F-105D Thunderchief and A-7 Corsair II. An affiliate of the Smithsonian, and also a non-profit organization, the Nuclear Museum seems a worthy recipient of support for said project.

As one can imagine, the New Mexico desert is a harsh environment for any kind of museum artifact, even fighter aircraft. According to the project’s Indiegogo page  the jets have both experienced the ravages of the Southwestern weather, and we would like to ask for your support in paying for the surface preparation and painting of the exteriors of the two aircraft.” A simple coat of paint goes a long way to preserving these pieces of history, especially from such a danger as corrosion.

This restoration effort is part of the Nuclear Museum’s “Operation Preservation.” The operation is headstrong “to repaint and refurbish the iconic aircraft in the National Museum of Nuclear Science & History’s nine-acre outdoor exhibit area, Heritage Park.” To re-surface both the F-105 and A-7, the cost will be $45,000. This may seem rather “pricey,” but there is a good reason. “The reason why the primer and paint for this project are so expensive is the paint must last a long time. In the Southwest region of the United States, normal paint or even MilSpec paint is only good for 3-5 years. The NAPA premium automotive primer and finish we will use is guaranteed for 15-20 years. In addition, we must choose a paint and a color that is approved by the United States Air Force and other museum entities.”

The F-105D “Thunderchief” will be the first aircraft to get a fresh coat. The F-105 was used as an attack aircraft in the Vietnam War, and was well-known for it’s ability to carry a wide array of armament. The museum’s F-105D Thunderchief, serial number 61-0107 was produced in 1962 by Republic Aviation, Farmingdale, NY, and was sent to the 49th Tactical Fighter Wing (TFW) in Germany to provide NATO nuclear retaliation capability during the depths of the Cold War.

The A-7 “Corsair II” will be the next to see a re-paint. the museum’s A-7 Corsair II, Bureau Number 154-407, the only aircraft in the museum’s collection to have ever flown in combat missions. This Navy carrier fighter-bomber was built in 1968, and in its first eight years in service, the aircraft saw numerous cruises including several Vietnam deployments. Within this timeframe, it had 3,338 flight hours and 731 carrier launches and landings.

Both jet warbirds are staples in the history of military aviation, and their story deserves to live on. A fresh lick of paint will do just that. To support the Nuclear Museum’s effort, visit their Indiegogo page.

To learn more about the National Museum of Nuclear Science & History, visit their website: www.nuclearmuseum.org