One of our goals at WarbirdsNews/Warbird Digest is to share stories of organizations promoting education and inspiration to the next generation of aviators, maintainers, engineers, and aviation professionals in general. We periodically follow the signs of progress of Patrick Mihalek with the KittyHawk Academy/Warbirds of Glory Museum,  Cascade Warbirds, NWOC’s “20 under 40” and several other initiatives under the “Education”  tag.

The Inspire Aviation Foundation, based in Atlanta, Georgia, is one such up-and-coming organization which has focused its primary mission upon aviation-related education efforts. This 501(c)(3) non-profit organization is the brainchild of a group of civilian and military aviation professionals and enthusiasts dedicated to the goal of bringing a world-class air and space museum and educational center to the Atlanta metro area. They have chosen Dekalb-Peachtree Airport (PDK), Georgia’s second busiest airport, as their future home, and plans for its development are already in progress. But until this project gets formally under way, they have been involved with creating a number of outreach programs to engage the local community.

The foundation’s latest initiative is the construction of a “Free Mini Library” filled with aviation books for kids of all ages. For those who don’t know, a Little Free Library is essentially a free-to-anyone “take a book, return a book” book exchange. Many communities across the country have created their own Little Free Libraries, and they come in many shapes and sizes. The most common version is simply a small, wooden, weatherproof ‘box of books’ on a post at an easily accessible location. Anyone may take a book, or bring a book to share. These Little Free Library book exchanges have a unique and personal touch, and have proven to be of great value in building community spirit. There is an understanding that real people are sharing their favorite books with their community; indeed, little libraries have been called “mini-town squares.” 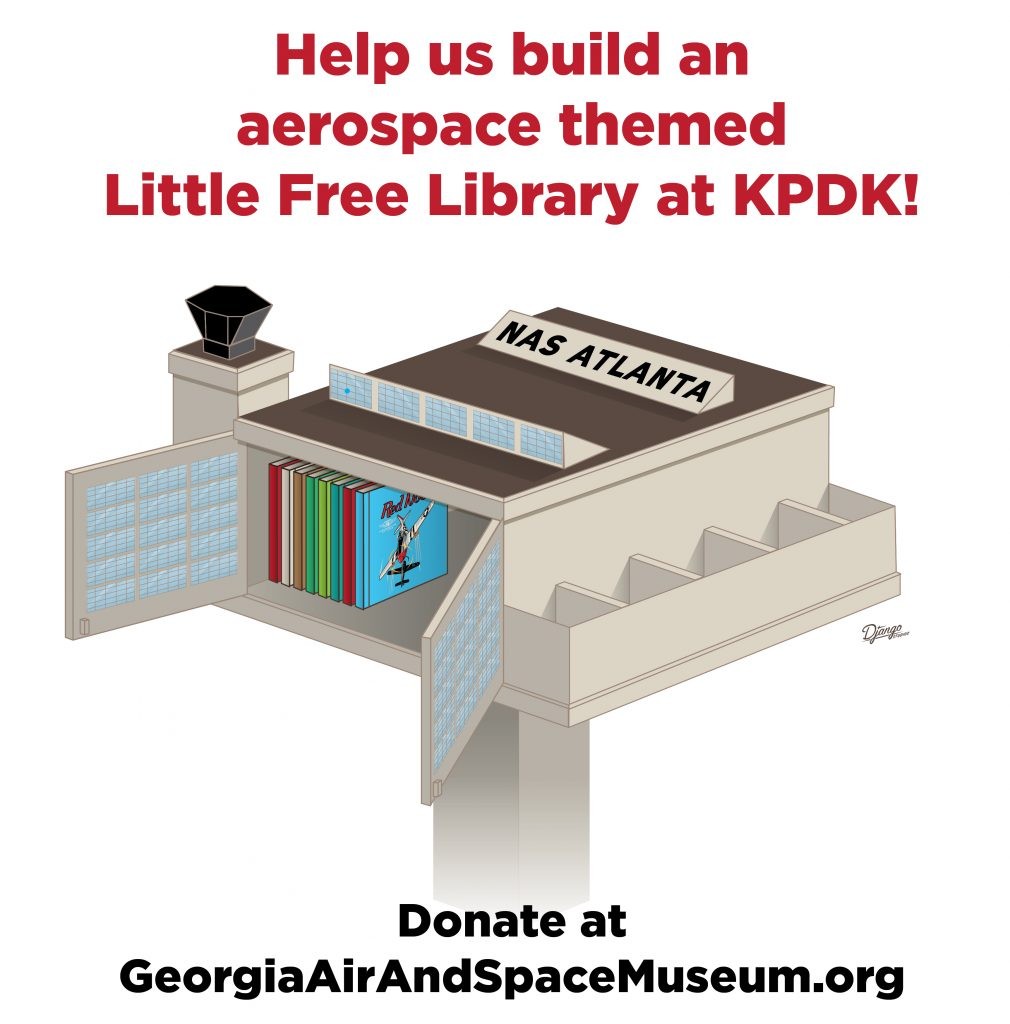 The ideas behind the design for Geor’s custom library, seen above, arose from the WWII-era hangar at PDK which once housed US Navy F4U Corsairs, TBM Avengers, and  training aircraft when the airfield was home to Naval Air Station (NAS) Atlanta. Today this hangar is still in use with EPPS Aviation.

The property where PDK now sits was formerly part of Camp Gordon, a WWI-era Army training base. After the Great War ended, the government disposed of Camp Gordon at public auction. A real estate developer named T.R. Sawtell bought the property, and soon began selling parcels of the land for agricultural uses. In 1940, the U.S. Navy acquired a small tract of this land at the airport, and in March 1941, they officially commissioned it as a U.S. Naval Reserve aviation base. Within a few months, however, as domestic defense efforts began to gain momentum with the pressures of WWII, it became apparent to the Navy that they had to broaden their activities at the nascent training base, so they entered negotiations with Dekalb County for the acquisition of the entire airport property for their exclusive use. They did indeed settle upon a lease agreement for the entire 333 acre property in June 1941, at a rental rate of $18,000 per year plus maintenance of the runways, hangars, lights, and other airport facilities. Eventually named NAS Atlanta, the airfield played a major role in the training of naval aviators during WWII, and also as a logistics way station in the war effort.

But by the 1950s, when the Navy needed facilities more suitable to its modern jet fighter aircraft and large patrol bombers, they realized that a move was in order. As a result, they built new facilities adjoining Dobbins Air Force Base near Marietta, Georgia, establishing the new permanent home for NAS Atlanta at that facility in order to share use of the longer U.S. Air Force runways. Control of what became DeKalb County Airport returned incrementally to the County and, in 1959, the airport became wholly available for civilian use.

Regarding the Inspire Aviation Foundation’s new Little Free Library, the organization’s Education Officer, Latessa Meader, said: “As part of our mission of promoting aviation and inspiring kids to reach for space and beyond, we think that the Doc Manget Memorial Aviation Park at the DeKalb-Peachtree Airport is the perfect location to build a Little Free Library filled with aviation books for kids of all ages. By chosing to design the mini library to resemble the WWII hangar we aim to honor the history of our airport and remember the women and men who served here.”

While the Inspire Aviation Foundation’s Little Free Library may be just a small step towards their future positive impact on the local community, it will make a difference and is worthy of our support.

To support this project and place a donation, please visit… www.georgiaairandspacemuseum.org