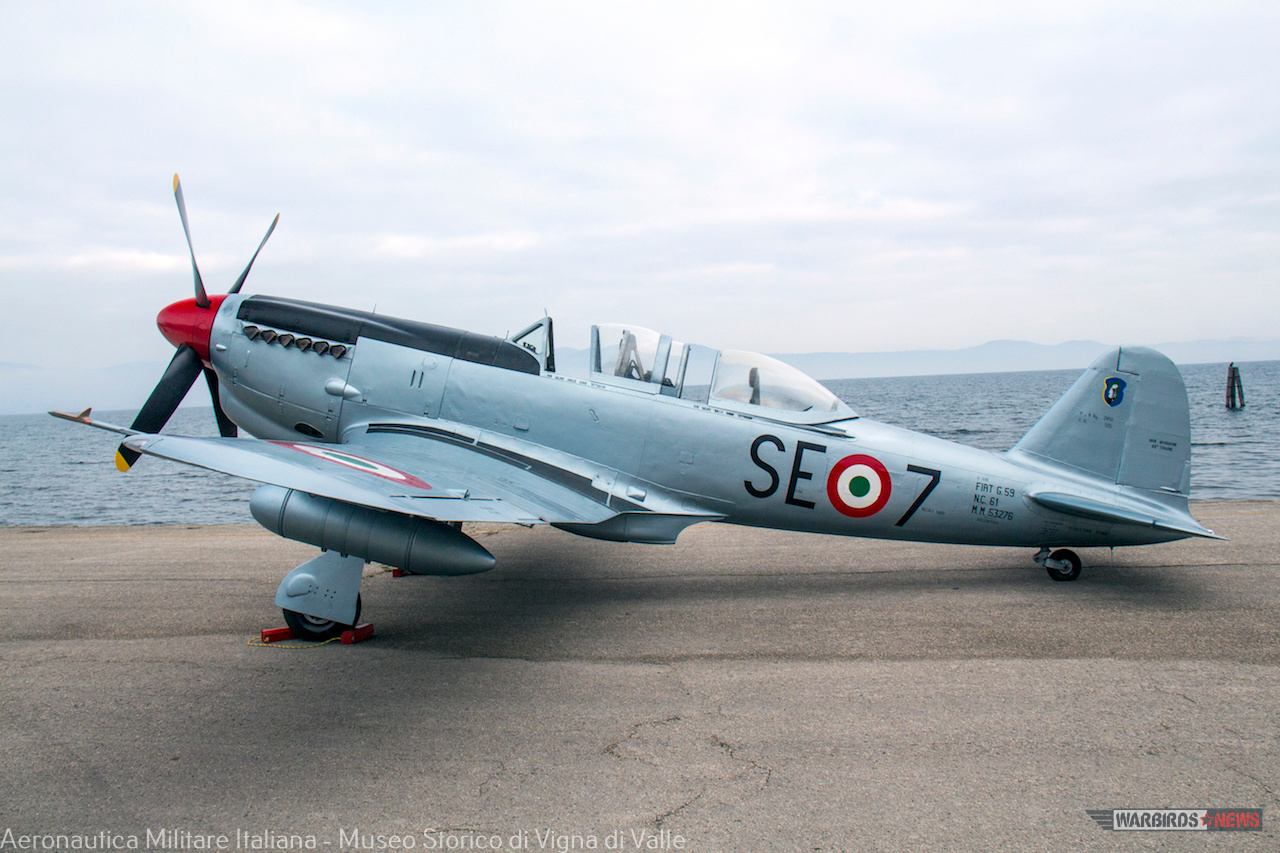 From an original article by Marco Gueli

In 2013 the Director Board of the Italian Air Force Historical Museum initiated the restoration work on the FIAT G.59 M.M.53276, displayed for years in Vigna di Valle. The paintwork was in particular need of attention, whilst the interior structure was found to be in overall good conditions. The large single engine airplane was moved to the Maintenance and Restoration Hangar, where the technical staff carried out an extensive inspection to verify the conditions of the airframe, followed by a restoration schedule and a bit of research around the aircraft’s history. The G.59 was considered a truly untouched, original specimen, as it was put on display without receiving any restoration work. The team was hoping to find some evidence of its last operational service with the Air Force. The museum recently embraced a philosophy which requires a full investigation of the aircraft’s condition and history before initiating any restoration work. An unrestored aircraft can be a perfect time capsule that reveals a lot of useful information related to its original layout, history and assembly methods, and these are often crucial details from not just a historical perspective, but also in achieving as accurate a restoration as possible.

This specific G.59 arrived from Turin in the mid-70s, following the Italian Air Force Museum’s move from Turin to Vigna di Valle, near Rome. The serial number helped identify the aircraft as construction number 61, specifically a IV-Series G.59-2B, with the tilting canopy seen on its predecessor, the G.55. Despite this information, the aircraft sported all the key features of a -4 aircraft – specifically sliding bubble canopies and a retractable landing light – however, this is explained because most early production aircraft eventually received upgrades to the later standards. Another particular feature of this aircraft is the propeller – a cuffed Hamilton Standard hydromatic – the same used on wartime P-51D Mustangs. This was particularly interesting because the majority of G.59s eventually adopted the postwar “paddle blade” propeller, which FIAT produced under license as 5010-0-00. Furthermore, the catalogue C.A. 724/1 stated that this G.59 was the last one to have a seat configuration sitting the student in front with the instructor behind him. Another peculiarity that emerged from the catalogue was that this aircraft was supposed to be unarmed, but despite that fact, there was a space for a 7.7mm (.303in) machine gun in the starboard wing. This could have either been a mid-life modification, or a mistake on the actual catalogue entry.

Now that the history of the technical modifications was clearer, it was time to find out more about the actual deployment of the aircraft.  A couple of pictures of this G.59 wearing the serial M.M.53276 emerged, showing the fuselage codes SE-7. This detail identified it as an aircraft initially assigned to the Elmas School in Sardinia. The careful inspection carried out by the restoration specialists showed a paint layer that was probably applied just prior to the aircraft’s delivery to museum in Turin in the late ‘60s. This paint would have covered over the G.59’s final squadron codes at its time of retirement. The initial inspection already showed the presence of fuselage codes beneath the spurious layer of paint, and thanks to the team’s patient work and the use of a special lamp they managed to identify two codes laying on top of each other: “RM-41” and “R-B+36”. There was no trace of the original identity, “SE-7”, but this is probably because the airframe was stripped and repainted following rework at some point in its service history. The inch-by-inch inspection of the surface proved very useful, not only because it revealed all the original stencils under the paint, but also because one of these stencils revealed the date of the aircraft’s final inspection; conducted by SACA in Brindisi on April 5th, 1962.

The combination of original photographs, details found on the aircraft itself and consulting Air Force registers allowed the team to reconstruct the full operational life cycle of the G.59: it entered service in the early ’50s in the Third Period Flying School of Cagliari Elmas. The school changed its codes from the S-3B (205th Sq. 203rd Group) to S-E, then by the end of ’57 it lost the dash and became SE. The pictures found show that the G.59 codes were initially SE-7 and that the prop spinner was red, an identity it had from 1957 to 1961, when the school was disbanded. The inspection date specifies that the work was concluded in April ’62, and since this sort of work took several weeks, it is plausible to think that as soon as the school was shut down, the aircraft was sent to SACA Brindisi for maintenance. After this stage MM53276 was assigned to two separate Regional Schools; the first likely being the 310th Gr. of CAV in the 3rd  Air Division at Bari Palese, where it wore the codes R-B+36. The aircraft then transferred to the 300th Gr. of CAV in the 1st  Region of Milan, based at a Linate first, then at Orio al Serio, where it became RM-41. Following its time in the Milan Group in the late ’60s, the Italian Air Force struck the G.59 from their books and assigned it to the Museum of Flight in Turin. 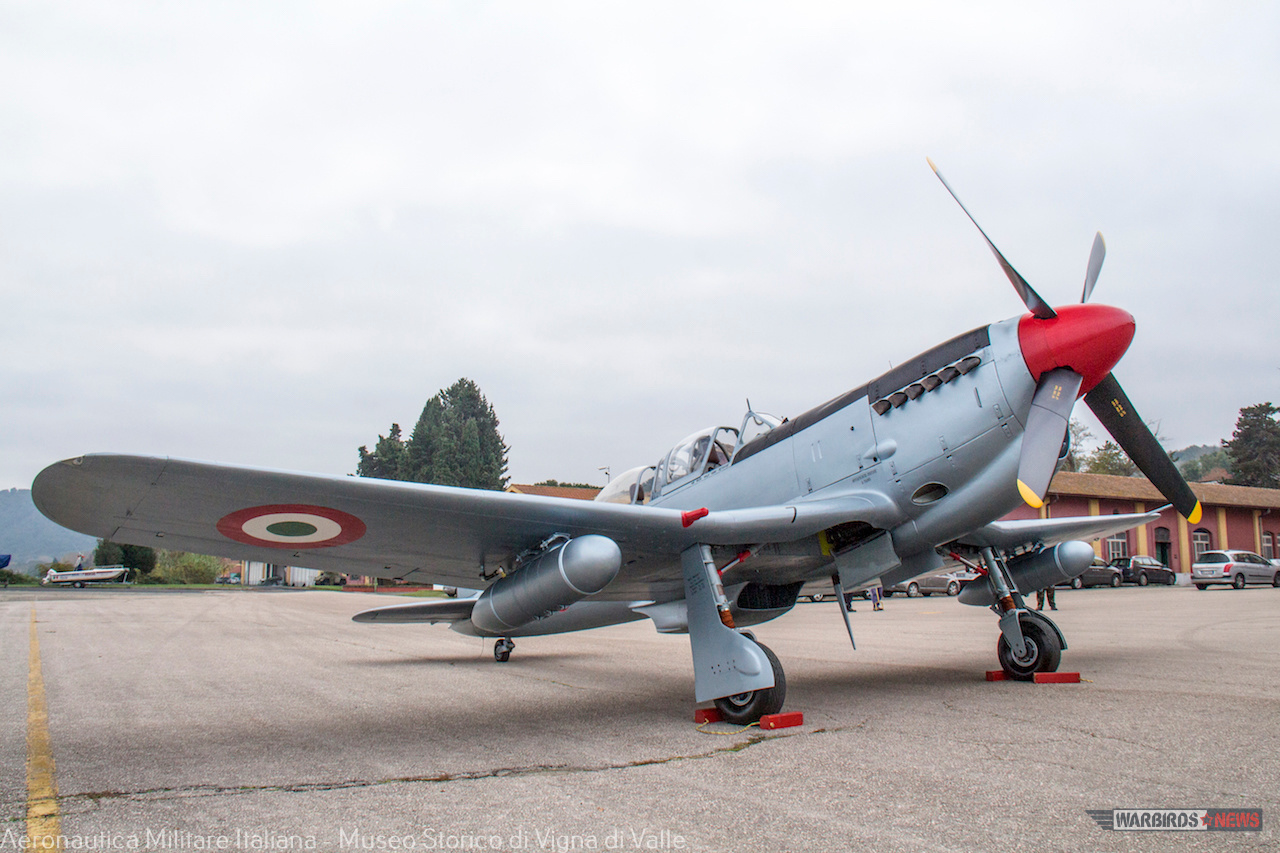 Prior to the restoration, the museum’s team carefully identified and measured the fuselage codes and stenciling in order to reproduce them accurately after the application of the new paint job. Interestingly, when the team removed the wing root fairings they found the original factory paint underneath which was evidently spared from the subsequent respray work. The standard color that FIAT applied was metallic sky-blue, the same applied on the MB.308, 323 and on the Nardi FN 305, and which was allegedly used also on the de Havilland Venom. The high visibility silver finish – largely used on postwar Italian aircraft, G.59s included – is therefore subsequent, and the metallic sky-blue finish was probably more widespread than originally considered. This was another little discovery that was only possible thanks to the examination of an unrestored aircraft.

Following the first restoration stage in 2013, the following year saw the beginning of the actual restoration work, which consisted in some small repairs to damaged parts, inhibiting of corrosion and last but not least an accurate repaint to ensure the FIAT would go back to it’s original identity as SE-7. On Tuesday November 17, 2015 after two years of painstaking research and restoration work, the FIAT G.59 was towed from the restoration/maintanance hangar to its exhibition space in the Badoni hangar.

WarbirdsNews wishes to thanks Lt. Col Poletti, Marco Gueli and Alessandro Taffetani for the translation.