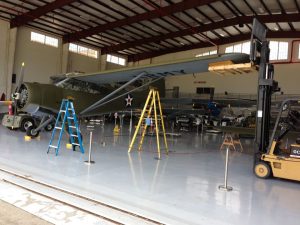 Soon to be the only flying Stinson O-49 Vigilant in the world, 40-3102/N63230 is completing its restoration at the Fantasy of Flight Museum in Polk City, Florida.

The two seat light observation aircraft was damaged by Hurricane Andrew in 1991 and has undergone a multi-year restoration to bring it to flying condition.

Following flying displays by a Fieseler Storch at the Cleveland Air Races in September 1938, the United States Army Air Corps revised its requirements for a two-seat light observation aircraft. A USAAC design competition was held, and the Stinson beat the ten other prototype planes that were entered. The prototype first flew on July 15, 1940 at Wayne, Michigan, equipped with Handley Page full-span leading-edge automatic slots and slotted flaps, and was reportedly controllable at just 31 MPH in addition to being able to stop in less than its own length after landing.

In US service it served in both Europe and the Pacific, seeing use for artillery spotting, liaison, ambulance work, light transport, espionage flights, and also for towing training gliders. In its primary tasks of observation and liaison, it was replaced by the smaller and lighter “L” birds, the Piper L-4 Cub, Aeronca L-3 and another Stinson design, the L-5 Sentinel.