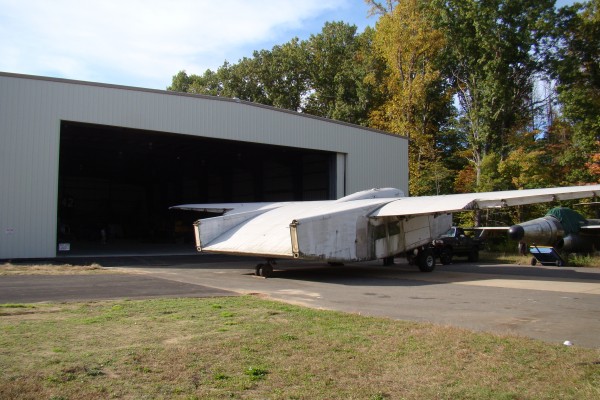 Restoration to static display has begun on the Burnelli CBY-3 “Loadmaster” owned by the New England Air Museum (NEAM) in Windsor Locks, CT. Aircraft designer Vincent Burnelli was a pioneer in the effort to design and build aircraft which incorporated a “blended wing” concept where the rectangular fuselage contributes significantly to lift, in the case of the CBY-3, fully 40% of the lift. Burnelli, born in Texas from Italian, immigrants began designing aircraft in 1915 and had a major hand in the design of the famed Lawson Airliner, America’s first twin-engined commercial airliner. Beginning in 1920 he began building blended wing prototypes. He called his concept a “lifting body.” When he died in 1964 he had just completed a design for a turbo-jet powered version with the jet engines mounted on pylons above the wing.

The CBY-3 was the last of about twelve lifting body aircraft of various designs to be built and flown. It was constructed at the Canadian Car & Foundry Co. in Montreal in 1945 and successfully flew as a cargo transport in Canada, South America and the United States until the early 1960’s. Commercial orders were not forthcoming however, as war surplus cargo aircraft were available in large numbers and the “lifting body” was viewed as radical for its time.

NEAM’s CBY-3 is the only surviving aircraft of Burnelli’s designs. The aircraft had been abandoned in Baltimore in the early 60’s and had been stripped of its engines, mounts and cowlings as well as most of its instrumentation prior to being acquired by NEAM in 1973. The weather has also taken its toll, most significantly debris damage from an F-4 tornado that struck the Hartford area in 1979. The twin tail booms, the 33 foot long horizontal stabilizer, tail fins and all of the fabric covered flight control surfaces are undergoing restoration in NEAM’S restoration facility. Two Wright 2600 engines and many instruments from NEAM’s inventory will eventually be installed and are currently undergoing refurbishment. Additional parts and assemblies will need to be located and acquired, including engine mounts and cowlings (which are compatible with the B-25), a set of four 15.00-16 main gear tires and two 9.00-6 tail wheels. Next April the wings will be removed and the fuselage will be moved into NEAM’s restoration building.

New England Air Museum is the largest aviation museum in New England. Located at the Bradley International Airport, New England Air Museum was organized in 1959. It is owned and operated by the Connecticut Aeronautical Historical Association and is a non-profit educational institution. As a non-profit organization 501(c)(3), the Museum depends on the generous support of individuals and businesses to fulfill its mission. Click HERE to donate or become a member.