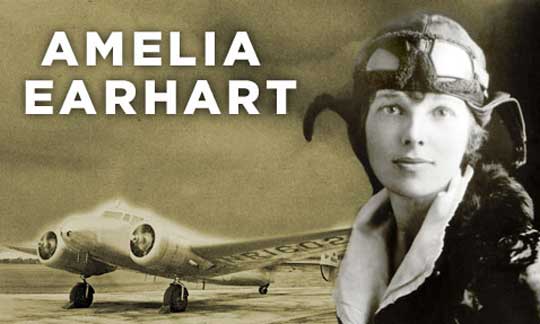 The New England Air Museum in Windsor Locks, Conn., will hold Open Cockpit Day on Sunday, February 16th.  On that day visitors will be permitted to climb into the cockpits of up to twelve vintage airplanes including two supersonic jet fighters, the Vietnam era Huey helicopter, the WWII P-47 Thunderbolt, the Vintage DC-3 airliner, and more. Also, as part of the day’s activities, renowned aviation archaeologist Ric Gillespie will make two presentations titled “THE SEARCH FOR AMELIA EARHART.” Amelia Earhart went missing over the Pacific Ocean in 1937 while attempting a round-the-world flight in her Lockheed 10-A Electra aircraft.  Since 1988 Gillespie has been attempting to solve the mystery of her disappearance.  After 25 years and 10 research expeditions, he has concluded that Earhart probably went down over Gardner Island (now Nikumaroro), an uninhabited atoll 350 miles away from her intended destination of Howland Island.  In his talk, Gillespie will point out features on the Air Museum’s Lockheed Electra 10-A aircraft which has proved to be extremely valuable to him in his research. Gillespie has been featured in numerous television documentaries including 2012 and 2013 specials on the Discovery Channel.The presentations will be at 11:30AM & 1:30PM.

There also will be hands on activities for the enjoyment of the younger visitors during the event.  A food vendor will be on site serving sandwiches, snacks and hot & cold drinks. The event will be held inside the Museum’s three large, heated display hangars.The Open Cockpit program runs from 10:00 a.m. to 4:00 p.m. with the Museum and gift shop staying open until 5:00 PM.  Sneakers or rubber-soled shoes are recommended.