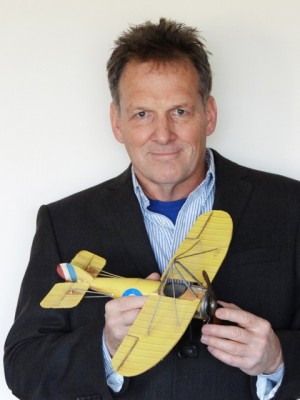 WINDSOR LOCKS, CONN., December 2, 2014 – Scott Ashton, President of the Board of Directors, has announced the appointment of Jerry Paul Roberts as Executive Director of the New England Air Museum effective December 15, 2014. Roberts succeeds Michael P. Speciale, who retired on December 1, 2014 after 29 years of service.Mr. Roberts has been a writer, an historian and a museum professional for over 30 years. He began his museum career at the Intrepid Sea Air Space Museum in New York City and served as Aerospace Curator, Senior Curator and ultimately, Vice President in charge of exhibits and education. Here he created dozens of interactive experiences and exhibitions and oversaw the transformation of the British Airways Concorde into a major walk-through attraction.

Mr. Roberts then served as Executive Director of the National Lighthouse Museum and most recently as Executive Director of the Connecticut River Museum where he continued to design and build world class exhibits, create dynamic public programs, and cultivate strategic collaborations and strong donor involvement and support.In Connecticut, Roberts also coordinated the History and Heritage component of OpSail 2012. He directed the effort to have Essex recognized as the state’s first War of 1812 battle site, coordinated the 1812 bicentennial commemorations, wrote and co-produced a documentary on the battle and recently published, The British Raid on Essex, the Forgotten Battle of the War of 1812, through Wesleyan University Press.“We enthusiastically welcome Jerry’s experience, expertise and commitment to our mission”, said Mr. Ashton. “He has just the right blend of skills, energy and vision needed to lead NEAM into the future.”

“This is an exciting opportunity,” said Mr. Roberts. “I believe my experience, passion for aviation history and unique skills can help broaden NEAM’s already impressive appeal and make the museum and its exhibits even more dynamic and relevant. I am looking forward to working with the staff, volunteers, board of directors and the aviation community to take NEAM to the next level.”

Mr. Roberts lives in Deep River, CT with his wife, Jeni and their two young children.NEAM Board of Directors worked with Marie Dalton-Meyer, a transition consultant affiliated with Third Sector New England’s Executive Transition Program. The program supports nonprofit organizations before, during and after the critical time of change in executive leadership. Creative Arts Workshop is a non-profitThe New England Air Museum is committed to presenting the story of aviation, the human genius that made it possible and the profound effects that it has had on the way in which we live.