The Experimental Aircraft Association (EAA) is celebrating 35 years of introducing youth to the world of aviation through the EAA Air Academy with a unique exhibit in the EAA Aviation Museum. The EAA Air Academy is a youth program created in 1984 by Executive Director of Resident Education Chuck Larson as a way to reach to young people interested in aviation. The Air Academy allows youth to participate in an unmatched aviation experience through hands-on demonstrations, flight simulations, and other exciting activities.

The Air Academy is recognized as the longest running aviation resident education camp in the United States and MSN Money ranked the Air Academy as one of the top 10 summer camps “worth the money” and “provides the foundation for a lifelong love of aviation.” The exhibit will feature stories of past and present graduates of the Air Academy and where they are now. Graduates of the Air Academy have gone into careers such as general aviation pilots, the military, air traffic controllers and dispatchers, general aviation pilots, EAA Young Eagles pilots, and many more. It will also highlight what the Air Academy features during its week-long camps, including mechanical skills and teambuilding and communication skills essential to aviation. 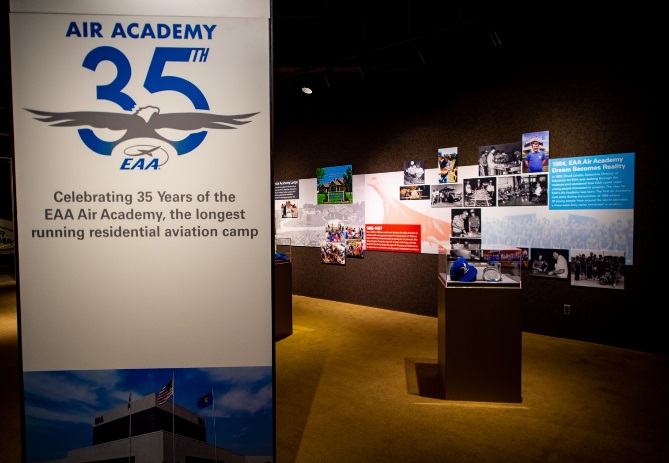 The EAA Aviation Museum is located just off Interstate 41 at the Highway 44 exit in Oshkosh. The museum is open daily from 10 a.m. to 5 p.m. EAA members receive free museum admission year-round. For more information, call the EAA Aviation Museum at (920) 426-6108 or visit www.eaa.org/museum.