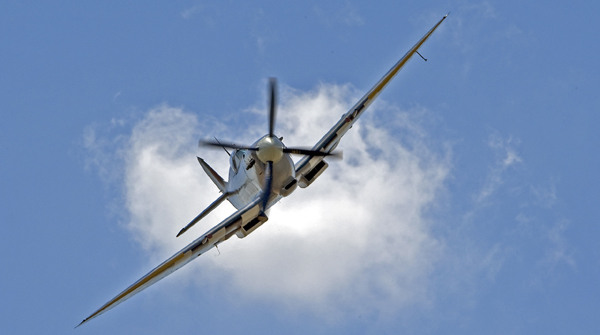 The Museum has announced that the  tickets for our 2014 air shows are now available to buy.IWM Duxford’s spectacular air shows attract visitors from all over the world for the thrilling flying displays and unique atmosphere of our historic airfield.

The D-Day Anniversary Air Show on Saturday 24 and Sunday 25 May commemorates the 70th anniversary of the D-Day invasion in magnificent style.The D-Day Anniversary Air Show commemorates the70th anniversary of this decisive military campaign, demonstrating the vital role that aerial warfare played in the invasion of Normandy. The air show will feature fighter, bomber and transport aircraft types that would have been seen over the beaches of France, together with thrilling ground content, including a march past by Normandy veterans and serving personnel from the Parachute Regiment. This special D-Day anniversary air show is not to be missed.

The Flying Legends Air Show on Saturday 12 and Sunday 13 July presents a nostalgic spectacular featuring historic piston-engined aircraft in an authentic 1940s atmosphere.The Flying Legends Air Show is famous the world over for its unique presentation of historic piston-engined aircraft in rare combinations and remarkable flying displays.Complimenting the ‘wow!’ factor in the air is the authentic 1940s atmosphere that can be experienced across the museum. It’s the closest you can get to being back at RAF Duxford in its flying heyday.The flying display promises an unmissable fusion of power, sound, excitement and nostalgia as iconic piston-engined aircraft from across the globe perform their breathtaking flights over IWM Duxford’s historic airfield.

Air show tickets and hospitality passes are now on sale and can be purchased online.