As most readers will be aware, July 16th – 24th, 2019 marks the 50th anniversary of the Apollo 11 mission, the first landing of human beings on the lunar surface. As such, many aviation museums will be taking part in celebrations focusing on this seminal moment in world history. On April 13th, the Museum of Flight in Seattle, Washington will be opening a major exhibit on the moon landings, which will actually include the Apollo 11 Command Module, Columbia. The historic space capsule actually belongs to the Smithsonian’s National Air & Space Museum (NASM) and is normally on display in Washington, DC however, as NASM’s DC campus is undergoing a major, multimillion dollar refit, Columbia has been on a national tour, giving other parts of the USA a chance to host this singularly important aerospace artifact. The Museum of Flight is making the most of this momentous opportunity, and will be opening their new exhibit, Destination Moon, in less than a month, although some of the display features, including the space suit gloves that Apollo 11 astronaut Edwin ‘Buzz’ Aldrin wore as he stepped onto the moon, are already on show. The following press release gives additional details about just what you can expect, and it will doubtless be a world-class experience!

The spacecraft flown on humankind’s first journey to the Moon is the centerpiece of the Museum’s special exhibition. Destination Moon: The Apollo 11 Mission, presented in partnership with the Smithsonian Institution, celebrates that historic flight. The challenge of putting the first steps on the Moon moved a nation during the 1960s, Apollo’s legacy now inspires today’s spaceflight adventurers. The exhibition takes you back with original Apollo 11-flown objects, interactives and unique artifacts from the Space Race. Only here will you experience them during Apollo 11’s 50th anniversary. And along the way, you too will feel reason to celebrate the beginning of today’s New Space Age.

In its only West Coast appearance Destination Moon will be on view April 13 to September 2, and will feature special programs throughout the run of the exhibition, plus a weekend festival during the July 20 50th anniversary of the giant leap for humanity. The exhibition includes more that 20, one-of-a-kind artifacts from the Smithsonian, many flown on the historic mission, plus dozens of NASA and Russian spaceflight additions from the Museum’s renowned collection.

Highlighting the exhibition is the historic NASA Apollo 11 command module, Columbia. Visitors can see the spaceship up close like never before, and can explore its intricate interior with an interactive 3-D tour created from the Smithsonian’s high-resolution scans.

The Smithsonian’s Destination Moon exhibition is enhanced with The Museum of Flight’s own Space Race displays with rare objects like a Soviet Sputnik satellite, early cosmonaut spacesuit and the world’s only display of the remains of the rocket engines that boosted Apollo missions to the Moon. Also unique is a gallery about the legacy of Seattle-area industry, astronauts and engineers to the space program.

Family experiences include spaceflight interactives and an indoor playground with a full-scale, hands-on command module.

Destination Moon: The Apollo 11 Mission is organized by the National Air and Space Museum and the Smithsonian Institution Traveling Exhibition Service. The exhibition is made possible by the support of Jeff and MacKenzie Bezos, Joe Clark, Bruce R. McCaw Family Foundation, the Charles and Lisa Simonyi Fund for Arts and Sciences, John and Susann Norton, and Gregory D. and Jennifer Walston Johnson. Transportation services for Destination Moon are provided by FedEx.Museu 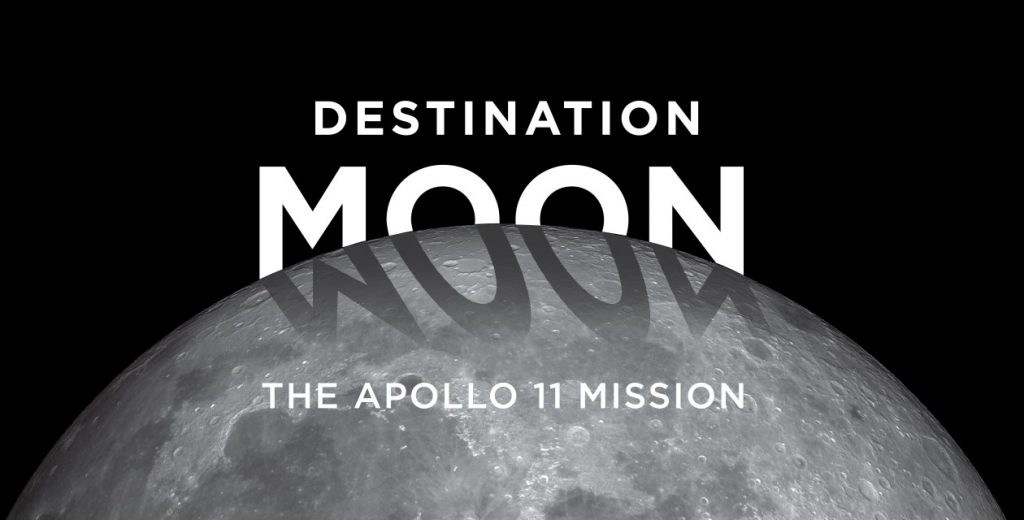