The former Carolinas Aviation Museum has officially announced its new moniker: the Sullenberger Aviation Museum, honoring Capt. C.B. “Sully” Sullenberger, who, along with his crew, famously landed US Airways Flight 1549 safely in New York City’s Hudson River. The aviation hero and flight safety advocate was on hand this morning for the announcement at Renaissance West STEAM Academy in west Charlotte, where museum leaders and other officials also provided updates on the capital campaign and construction progress for the museum’s new facility adjacent to Charlotte Douglas International Airport.
The museum has housed the famous Flight 1549 plane – which was en route to Charlotte on January 15, 2009, after taking off from New York’s LaGuardia Airport – and a corresponding exhibit since 2011. Dozens of passengers aboard the flight were Charlotteans and many still call this region home.
Ric Elias, a Flight 1549 survivor and CEO of Red Ventures, a diverse portfolio of influential brands, businesses, and digital platforms, personally donated $1 million alongside $500,000 from Red Ventures’ Lonely Planet to the museum’s Lift Off Capital Campaign as a way to honor Capt. Sullenberger.
“Flight 1549 changed the course of my life and gave me the ultimate gift of a second chance,” said Elias. “The Museum is a tribute to the courage of Capt. Sullenberger and the entire flight crew, and my hope is that it will also inspire young innovators to change the world.”
The renaming signifies not just a new brand, but an inspiring new vision for the 31-year-old museum. While its new facility will continue to exhibit historical aircraft, it will also serve as an elevated educational resource and innovation center to help shape the Science, Technology, Engineering and Math (STEM) workforce development pipeline throughout the region.
“The Sullenberger Aviation Museum will be the premier aviation museum of the Southeast and will allow visitors to experience the past, present and future of aviation like never before,” said Sullenberger Aviation Museum Board Chair Marc Oken. “This reimagined museum will serve as a vital resource to help students and adults connect to careers in STEM-based industries all while showcasing the power and potential of the human imagination through the wonder of flight and transforming lives and economic vitality in the Carolinas.”
Projected to open by the end of 2023, the 105,000-square-foot Sullenberger Aviation Museum multi-building campus will offer immersive learning experiences like flight simulators, interactive exhibits, STEM education programs and authentic RFID storytelling of the Carolinas’ past, present and future in aviation.
“Nearly 14 years ago to this day, Capt. Sullenberger saved the lives of over a hundred people thanks to his quick thinking and courageous actions spurred by years of specialized training in science, math and engineering, the combination of which allowed him and his crew to land Flight 1549 safely in the Hudson River,” said Stephen Saucier, president of the Sullenberger Aviation Museum. “Capt. Sullenberger has committed his life to inspiring and educating future generations by elevating the wonder of flight and affirming the importance of STEM learning and equity, all of which mirrors our museum’s mission. Every inch of this new space is being designed to expand visitors’ horizons and provide inclusive learning opportunities for all, and we are honored that our new name will reflect that spirit for years to come.”
Following the inspirational groundbreaking ceremony on Sept. 27, construction on the new space is underway, with a goal of curating a high-profile cultural tourism attraction and educational resource that will boost economic opportunity, especially on Charlotte’s disadvantaged west side.
“Aviation – one of the most transformative industries in the world – has not historically been accessible to our underserved communities, but it is our hope that as more than a collection of aircraft, the Sullenberger Aviation Museum will serve as a vehicle of opportunity to inspire and elevate the next generation of innovators and future heroes,” said Capt. Sullenberger. “I feel privileged that my name will be associated with such an awe-inspiring institution that is actively working to expand social, cultural and economic mobility in Charlotte and beyond.” 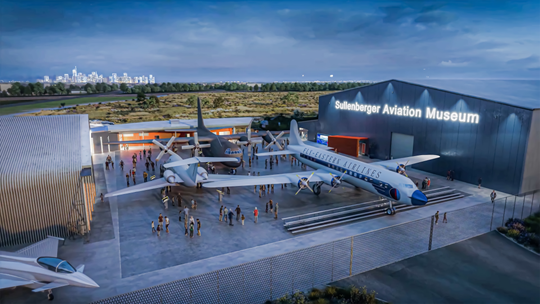 The Lift Off Campaign, chaired by Marc Oken, is the largest capital campaign in the museum’s history and has raised 94% of the approximately $31 million anticipated cost, including a $5 million commitment from Charlotte Douglas International Airport’s Cannon Fund to develop an airport site for the museum’s future facilities, a $1.5 million gift from Honeywell, and a $1 million contribution from Bank of America to name and sponsor the Miracle on the Hudson exhibit, as the bank had nearly two dozen employees aboard that flight. The passengers of Flight 1549 have also collectively started the Flight 1549 Campaign, a separate funding initiative dedicated to preserving the aircraft and funding the corresponding materials and collection for years to come.
“Honeywell has a long history supporting STEM education around the world, and we are honored to play a role in helping bring to life this world-class innovation facility, now known as the Sullenberger Aviation Museum,” said Honeywell Chairman and CEO Darius Adamczyk. “At Honeywell we are in the business of creating a better, more sustainable future through our innovative products, solutions, and social programs. The opportunities in education and human ingenuity this museum will provide will be invaluable in developing the next generation of innovators.”
Honeywell will sponsor two key areas in the new museum. The first is a themed exhibition zone in the new Main Gallery known as Innovation Nation that presents the history of aviation as a testament to humankind’s capacity for creativity and imagination of possibilities beyond the known is where US Airways Flight 1549 is presented. The company’s 131-9A auxiliary power unit, or APU, played a critical role in enabling the Airbus A-320 aircraft to touch down safely in the Hudson River. Honeywell is also sponsoring the museum’s Maker Space, in which youth can learn about aviation via interactive, hands-on activities, and a Career Center specializing in STEM workforce development.
Site development is being conducted in two phases across three buildings – a welcome center, a main exhibit hall and a preserved historic hangar complemented by an outdoor plaza with additional historic aircraft. The new museum is projected to open at the end of 2023 and is expected to draw more than 120,000 visitors annually and connect more than 15,000 students to STEM programming and career development labs.
About Sullenberger Aviation Museum
Sullenberger Aviation Museum, renamed in honor of Capt. C.B. “Sully” Sullenberger, aims to Inspire, Educate and Elevate by re-imagining the greater Charlotte region as a hub for aviation and STEM innovation and creating more diversity and economic mobility by inspiring and empowering the next generation to pursue careers in STEM, aerospace and aviation. A Smithsonian affiliate, the museum receives support from the Infusion Fund, a partnership between the City of Charlotte, Foundation For The Carolinas and generous donors to support the arts and cultural sector. For more information, visit www.sullenbergeraviation.org.