As we mentioned in a previous article, Base Tuono is the only museum in Europe which is dedicated solely to the Nike-Hercules NATO missile defense system and the Cold War. Situated in the Alpine foothills in north-eastern Italy, the museum has been working hard to expand their exhibition space for some years now. They plan to add a new hangar to display relevant Italian Air Force aircraft. The museum refers to this new building as Alpha, and intends to house Lockheed F-104S Starfighter MM6781, which is already on site, along with a North American F-86K Sabre and possibly a Fiat G.91.

However, due to the difficulties which Italy, and indeed the world, is experiencing with the Covid-19 pandemic, the expansion of Base Tuono has naturally suffered a slowdown with the construction of its new building, which was due to begin this spring. The start date slipped until July, but the museum now hope’s to inaugurate the completed building sometime in mid-October.

That any of this was possible at all is thanks largely to the convergence of intent and objectives between the Trentino Historical Museum Foundation, the Municipality of Folgaria (in which the museum sits), the Italian Air Force and the Autonomous Province of Trento.

The first step in the museum’s evolution to include Cold War combat aircraft was marked by the appearance four years ago of an aircraft well known to Italian Air Force enthusiasts, the mighty F-104 Starfighter. Initially deposited outside the missile assembly building in July, 2016, F-104S-ASA (model 783-14 – c/n 1081) MM6781 “5-31” arrived from its previous home at Montegiorgio Airfield (FM). Re-assembly operations began the following May 2017, in preparation for the Starfighter’s restoration.

Known to the world as GAVS, the Gruppo Amici Velivoli Storici is an association, with a long and prestigious track record, dedicated to preserving Italian aeronautical heritage. A section of GAVS in Trento began helping with the restoration in August 2017, moving the airframe inside a temporary enclosure to allow the work to continue more effectively. They began first by cleaning the aircraft, and preparing the exterior surface to accept a coat of primer paint, before applying the traditional, 70’s-era Italian Air Force Starfighter camouflage scheme. In October 2018, the restoration managers began to apply the first coats of paint, with the traditional green/dark gray on the upper surfaces, and aluminum on the lower. 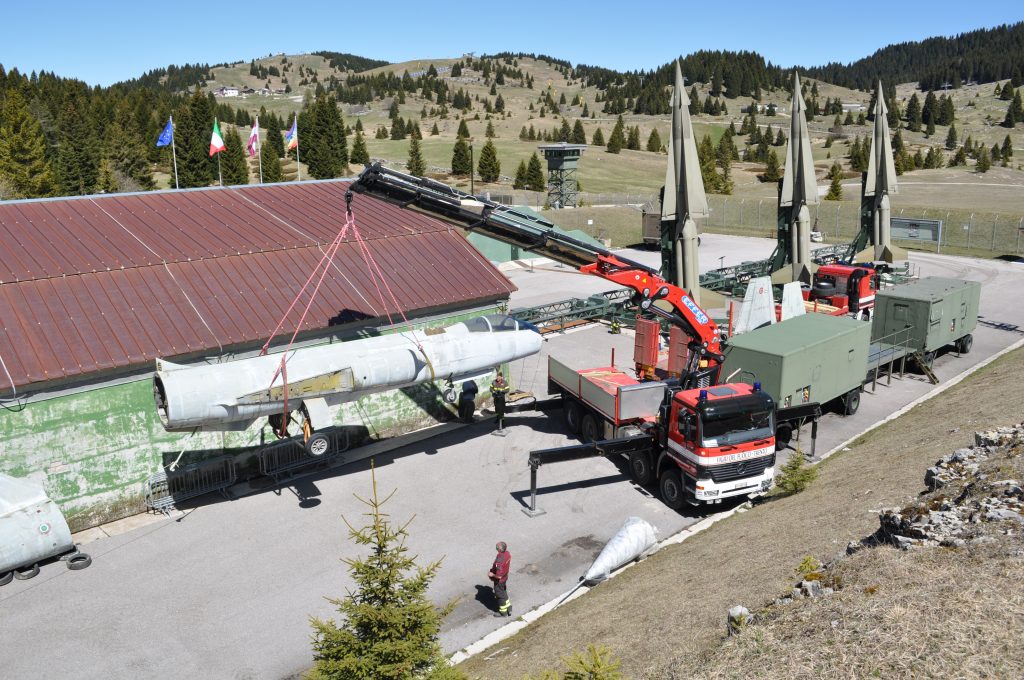 This specific F-104 received the same livery it wore in 1972 when Aeritalia delivered the brand new airframe to the Italian Air Force’s 155th Black Panthers Group of the 50th Wing in Piacenza; her fuselage code being 50-01. Interestingly, there is a double connection between this aircraft and the Nike-Hercules, as the 155th Group was also assigned the strike role, making this Starfighter a nuclear attack capable fighter bomber, (as were some Hercules missile warheads). Additionally, the 50th Wing is named in memory of Captain Giorgio Graffer who died in Greece in 1940. Graffer came from Italy’s Trentino region, the same province where the museum stands.

During her operational life, MM6781, much like other Starfighters in service at A.M.I., underwent various squadron assignment changes and maintenance updates. The airframes military history is as follows:

Today little remains of the infrastructure surrounding the now long-retired Nike Hercules missile system anywhere in the world. However, Base Tuono  has recreated much of the look and feel of how the place would have looked during its active years. We look forwards to reporting on further developments at this important historical museum in future updates. For more information about the museum, please visit www.basetuono.it

Many thanks indeed to Christian Vaccari for the article and photos.