The following is edited from a press release by the American Airpower Museum, Long Island’s only military aviation flying museum. The museum will be holding a Grand Reopening event on Saturday, August 1, 2020. Like all museums in New York State, the American Airpower Museum (AAM) had to close temporarily due to the Covid-19 outbreak. This resulted in the cancellation of half the museum’s 2020 flight season. However, the museum’s iconic WWII bombers and fighters are now back with an exciting, family-friendly flight demonstration which is guaranteed to thrill aviation enthusiasts of all ages!

AAM had expected 2020 to be a banner year for the organization. Museum aircraft were scheduled to participate in a number of historic events marking the 75th anniversary for the end of WWII and honoring U.S. veterans who made the Allied victory possible. Indeed, AAM’s WWII aircraft were going to appear in the annual Bethpage Air Show at Jones Beach State Park, an event they have participated in for the past 17 years. Furthermore, it should be noted that the American Airpower Museum celebrated its 20th anniversary on May 24th 2020 –  but had to do so in silence.

At the end of the 2019 season, AAM took their fleet “off line” to begin scheduled winter maintenance and inspections, making sure the aircraft would be ready for a full 2020 flight season. However, sometime in early January, the coronavirus hit our shores with a punishing outbreak in New York. Public health and safety concerns led AAM’s Board of Directors to preemptively close the Museum for two weeks beginning on March 16th. “The health and safety of our staff, volunteers and the public was foremost,” said Jeff Clyman, AAM president. “That’s why we acted early and sent everyone home, causing a total cessation of work on our aircraft,” he added. But on March 22nd, New York State ordered all non-essential businesses to close statewide. Two weeks of closure therefore ballooned into three months.

AAM’s mission has always focused upon honoring the legacy of those who gave all to preserve our freedoms. Clyman encapsulated this sentiment by noting, “We’re pleased to announce we recently resumed maintenance and inspection of our aircraft so that much anticipated flight operations can begin with our grand reopening event. We also promise a flying salute to our veterans and front line workers very soon!”

So join the American Airpower Museum on August 1, 2020 at 11:00 a.m., when WWII-era warbirds and other vintage aircraft will depart from the museum’s ramp, taking to the skies over Long Island’s northern and southern shores. These magnificent aircraft will create camera-ready opportunities as they perform low-level passes over the museum’s home at Republic Airport. These flights are expected to feature the AAM’s Grumman TBM Avenger, two North American T-6 Texans, an AT-28D Trojan, a WACO UPF-7 biplane and, as an added attraction, several L-39 Albatros Cold War-era Soviet jet trainers! 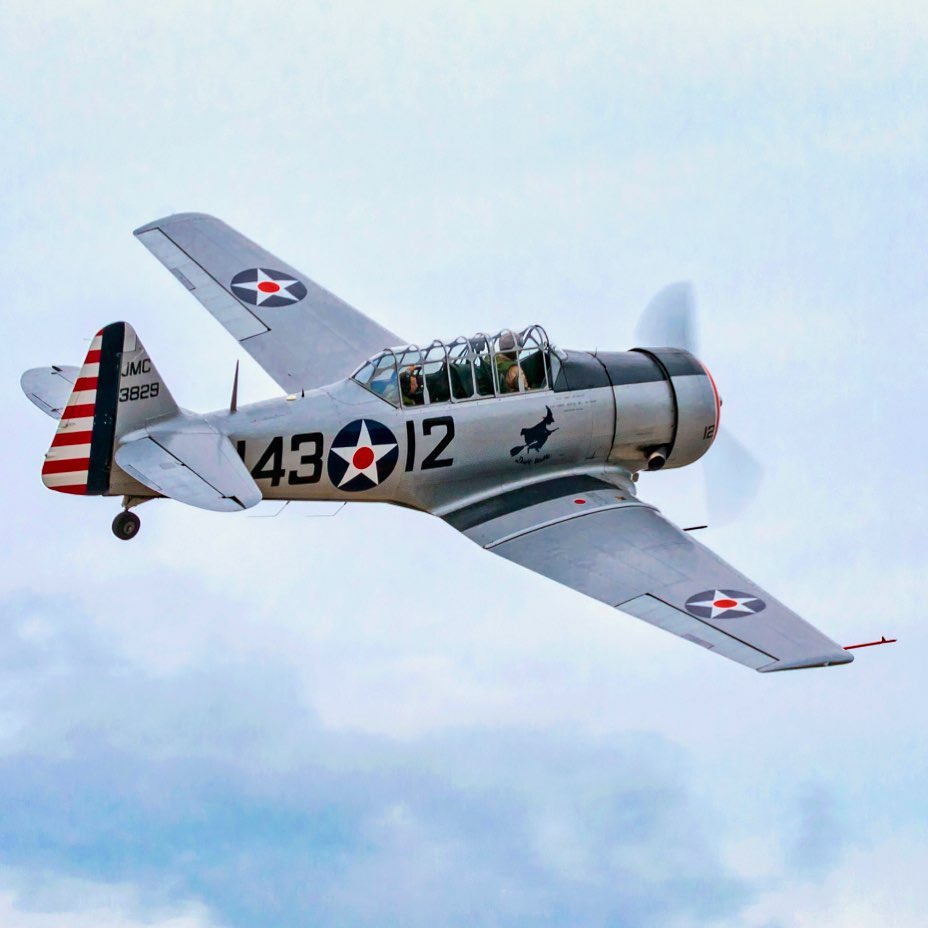 Admission for Adults is $13, Seniors & Veterans $10 and Children $8. Due to the need for social distancing, admission to the outdoor ramp area will be limited to a maximum attendance of 150 persons, on a first come/first served basis. There will be only limited access to the museum. All visitors will be required to wear face masks and have their temperatures taken digitally at the entrance. As a special promotion, the first 20 people admitted will be included in a raffle for flights in the museum’s WACO biplane later in the summer (limit one per family). So bring your lunch, hang out and enjoy the AAM experience!

If you can’t join in the fun on Saturday, August 1st, please do consider helping AAM to offset major financial losses incurred during the Covid-19 shutdown, by contributing on the secure PayPal link HERE. For more information about corporate donations, please contact AAM’s executive vice president Jacky Clyman by telephone at (917) 690-1965 or via e-mail at jacky@cockpitusa.com.

The American Airpower Museum is an aviation museum located on the landmarked former site of Republic Aviation at Republic Airport, Farmingdale, NY. The Museum maintains a collection of aviation artifacts and an array of aircraft spanning the many years of the aircraft factory’s history. The Museum is a 501 (c) (3) Nonprofit Educational Foundation, for more information visit www.americanairpowermuseum.com