Back in July, we reported on the American Airpower Museum, and the success they had encountered in holding their C-47 D-Day Living History Flight Experience event which they held at their airfield in Farmingdale, New York. A nation starved for more than a year of meaningful aviation experiences was eager to take flight in historic aircraft again, and happily, it seems this also proved true when the museum held a repeat performance at the end of July – indeed the demand was so high that they have decided to provide a further opportunity this season for people to fly in their C-47! This is currently scheduled to take place on Saturday, October 9, 2021, with a rain date set for the following day.

Guests will fly aboard AAM’s WWII-veteran Douglas C-47B-30-DK Skytrain 44-76717 (nicknamed Second Chance), along with AAM’s Living Historians who will deliver a breathtakingly realistic recreation for some of what U.S. paratroopers would have experienced during their preparations for the Invasion of Normandy. There are four flights currently scheduled for for October 9th, and these will take place between 9:00 a.m. and 2:30 p.m. Seats are allocated on a first-come-first-served basis, so the sooner you call to book your flight the more likely you are to pick your perfect spot. To contact the AAM to arrange your flight, please call (516) 531-3950 or (631) 454-2039. You can also book in person by visiting AAM’s gift shop (Wednesdays thru Sundays) between 10:30am and 5:00 pm at Hangar 3, Republic Airport, 1230 New Highway, Farmingdale, NY 11735.

Regarding what participants in the C-47 D-Day Living History Flight Experience can expect, it’s pretty comprehensive! The museum’s press release describes it as follows…

The folks going up on these living history flights are a mixed group, mostly adults, some veterans and there’s a sprinkling of young adults and teenagers. Minors under 14 years must be accompanied by an adult. Each guest is assigned the identity of a member of the 506th Parachute Infantry Regiment. All will get a feel for what it was like as a 101st and 82nd Airborne Division paratrooper making their incredible 1,200-plane airborne D-Day assault when the Allies stormed the coast of northern France.

The crew are all licensed pilots, some being ex-military, who have flown our C-47 and other restored aircraft for several years. Reenactment flights are led by famous World War II Living Historian Robert Scarabino, who is Director of the 101st Airborne Living History Group. With help from his 101st Airborne Living Historians, Commander Scarabino transports his passengers back in time. This D-Day Flight Experience as a WWII paratrooper includes a mission briefing for the Battle of Normandy, the Allied operation which launched the successful invasion of German-occupied Western Europe during World War II; a chance to wear authentic military field jackets, helmets, and gear throughout this mission; the rare chance to take flight in an original WWII-era C-47, one of the few true C-47s still in original military condition. 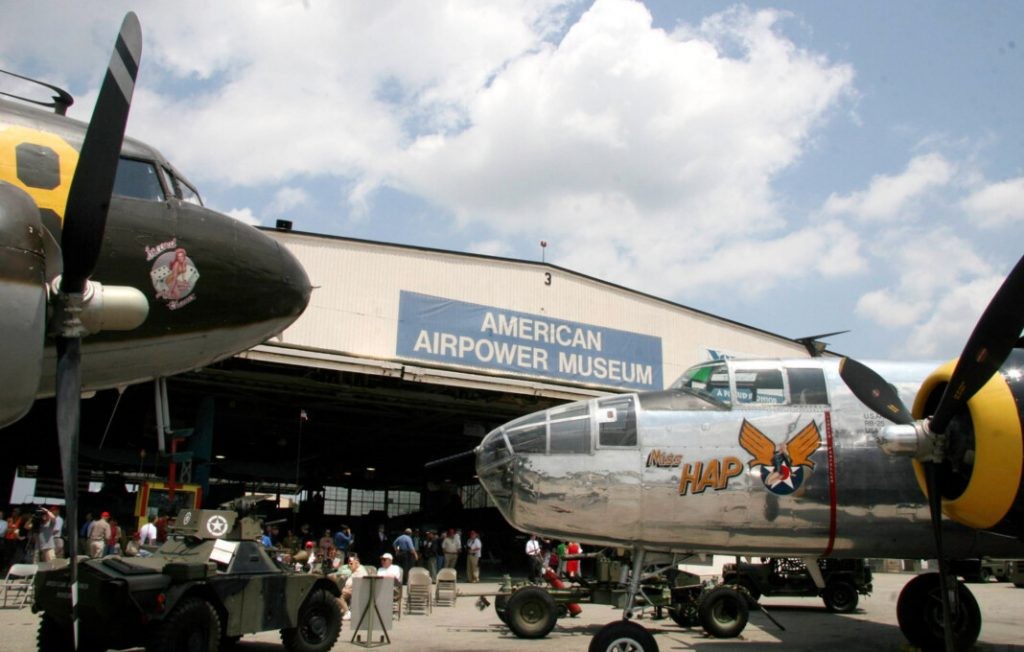 Commander Scarabino starts off in a small “Ready Room” with walls covered in maps of the French coast. He lays out the objective, to destroy a Nazi German garrison and secure the causeways leading to the beach. Before dismissing his “troops,” he will issue them a tourniquet, a box of what was meant to be morphine, plus a reminder to take out a GI life insurance policy. “You’ve been training hard and fast for two years,” Scarabino will shout to the room full of his soldiers. “God bless you, and I’ll see you in the assembly area.”

Once onboard AAM’s C-47, Scarabino’s “troops” will experience the sights, smells, and sounds as the aircraft’s twin Pratt & Whitney R-1830 Twin Wasp engines fire up  – and then they will be off into the blue! They’ll watch the crew operate their C-47 as paratroopers get ready for battle. As they fly over Jones Beach, they line up and get ready to parachute down. They will relive the WWII experience right up until the moment when each paratrooper hooks their parachute ripcord up to the static line rail above them and gets ready to jump! (Many participants have noted how they were sweating with racing hearts by this moment, as it felt so authentic.)

After about half an hour in the air, the flight will return to Republic Airport, taxi back to Hangar 3 – and then participants will pull a card from their pocket describing the fate of the paratrooper whose identity they had assumed… the teachable moment which brings the reality of the Greatest Generation’s sacrifice so powerfully home to everyone who takes part in these remarkable flights.

Of course, once back on the ground, visitors can then tour the Museum which contains over a dozen flight-ready military aircraft used throughout the 20th century. Those taking part in the flight experience will have gained a whole new perspective on the exhibits they will explore…