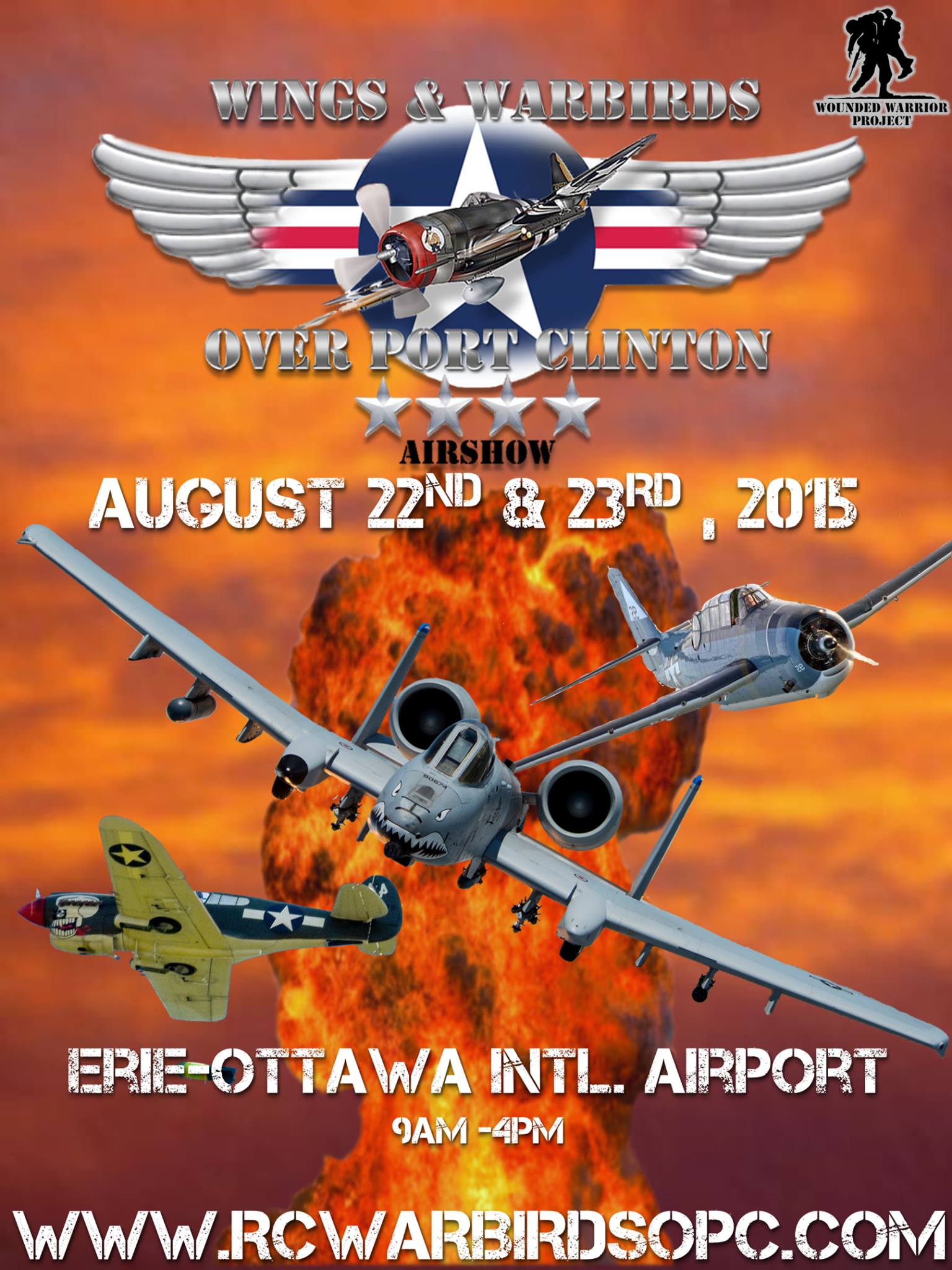 PORT CLINTON OH – At the Wings & Warbirds Over Port Clinton Airshow, everyone will enjoy the festivities! The event is located at the Erie-Ottawa International Airport and run buy the non-profit North Ohio RC Association.  The show will have several attractions covering different aspects of full-scale and model aviation.  Radio controlled flight exhibitions will range from medium to giant scale propeller driven and jet turbine aircraft. Professional RC pilots will perform aerial 3D, pattern, scale and extreme helicopter aerobatics throughout Saturday and Sunday.  With your admission of $10.00 you’ll get full access to the Air Show and the Liberty Aviation Museum with its beautiful World War II exhibits! Take a stroll through the museum and check out the Harvard Mk IV and the fully restored General Motors TBM-3E Avenger from the Lake Erie Warbirds Liberty Aviation Museum’s Ford Tri-Motor “City of Port Clinton/City of Wichita”.

During the show you will be able to get up close and personal with other Full Scale Historic Warbirds and present day military aircraft. Yankee Air Museum’s B-17 “Yankee Lady”, B-25 “Yankee Warrior” and C-47 “Yankee Doodle Dandy” will all be available for Flight Experience rides on Saturday and Sunday.  Titan Aircraft’s T-51 will be doing fly overs and aerobatic demonstrations throughout the day as well as and Redline Airshows with their RV-8’s. During the day flight demonstrations from Charlie Cartedge’s Grumman TBM Avenger, the 179th Air National Guard C-130 Hercules from Mansfield, OH, and the 122nd ANG A-10 Warthog from Ft. Wayne, IN piloted by Maj. Curtis “kid” Martin are sure to thrill the crowd. Added to this will be the amazing opportunity to meet Tuskegee Airman Col.Harold Brown. Col.Brown flew thirty missions with the Red Tails before being shot down in a strafing attack. He became a POW, and had a harrowing time during the last months of the war, as you might imagine. There is a fascinating audio recording of Col.Brown recounting his shoot down below…

Incidentally, Colonel Brown will also be at the Liberty Aviation Museum on September 15th when the P-51C Mustang from the CAF Red Tail Squadron will be on site, together with their powerful Rise Above Traveling Exhibit.

Spectator and pilot lounge tents will have a wide variety of fantastic food at an affordable price.  For a break from the festivities and a full menu, you can visit the Tin Goose Diner in the museum where a classic diner menu and décor from the fifties will transport you back to the Golden Age of Aviation.  After your meal at The Tin Goose, be sure to stop by the Tri-Motor Heritage booth for some great  Toft’s Ice Cream from the local area.

This year the airshow has partnered with the Wounded Warrior Project and is a WWP official event. This means the more the community supports the show the more our wounded soldiers will benefit from it. For each admission ticket sold a percentage of that ticket will be donated to the WWP! It is our duty to help those who so richly deserve it. So come on out to the event and show your American colors!

Advanced tickets for the Warbirds event can be purchased at Wings & Warbirds – Flying, Food, and Fun for the whole family!

• Pilot and Spectator lounge for great food and beverages.

• NASA Technology booth for some high technology demonstrations and what’s in store for the future of the space administration.