It’s that time of the year again, and we are just under a month away from one of the great air shows of the season. Warbirds Over the Beach, the Military Aviation Museum‘s annual aerial extravaganza in Pungo, Virginia will take place over the weekend of 16th-18th of May. Jerry Yagen’s museum has regained its momentum, and is moving forwards very positively. The Canadian Warplane Heritage Museum’s Avro Lancaster B.X FM213 is expected to take part again this year, and Mr. Yagen hopes to partially replicate the amazing formation seen in Hamilton last year featuring the Avro Lancaster in formation with MAM’s deHavilland Mosquito FB.26, Supermarine Spitfire Mk.IX, and Hawker Hurricane Mk.XII. The roar of all these Merlin engines in tight formation will be a marvel indeed.

Warbirds Over the Beach is one of the most intimate air shows anywhere in the US, and allows the visitors to get up close to the aircraft, both in the static display areas, and alongside the runway as well. The beautiful grass airstrip, set against the trees provides a perfect photographic opportunity for even the least experienced photographer to capture a fabulous image of aircraft taking off and landing. 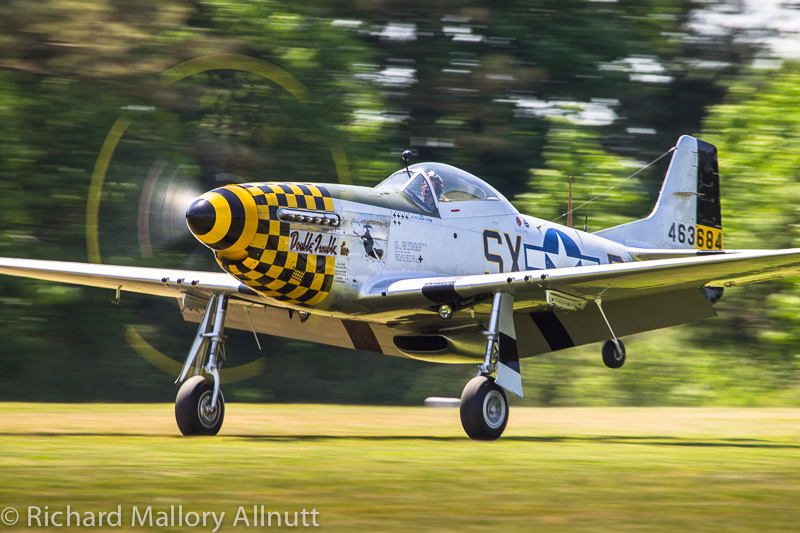 The flying schedule is relatively informal and aircraft take off and land regularly, but there are so many other fascinating things to see at the show varying from the myriad re-enactors’ camps, to the original WWII Luftwaffe hangar, filled with German aircraft.

WWII veteran pilots can often be found to chat with at tables set up in the main hangar. There’s also a faithful replica of a WWI-era hangar packed with several dozen replica WWI aircraft as well.

One of the highlights from last year’s show was the firing demonstration of a genuine WWII German Flak 36 88mm cannon. The Curtiss C-46 Commando “Tinkerbelle” also dropped a couple of sticks of paratroopers dressed in WWII-era 82nd Airborne uniforms as well.

Several warbird rides will be available for purchase on the show days as well. Make sure to check in on the official Warbirds Over the Beach website HERE to see the details as they are added. There is also a steak dinner, and big-band dance scheduled for the night of Saturday May, 17th. Be sure to get your ticket’s ahead of time. Click HERE for details on how to do so.

In recent conversations with WarbirdsNews, Jerry Yagen affirmed that the rumors of his selling off the collection are unfounded. It’s currently full-speed ahead with restoration work resuming at numerous sites around the world. He is also working on adding a B-17 back into the collection again after selling his B-17G “Chuckie” last year. Even though last year’s air show was interrupted by rain, it was still his favorite due to the flying presence of his Mosquito. That being said, he loves to attend the Flying Legends air display at Duxford in the UK.

Below is a selection of photographs from last years Warbirds Over the Beach air show, and hopefully this will whet the appetite of our readers. This air show is NOT to be missed!