by Andy Heins and Tom Pawlesh

Just as the swallows return to San Juan Capistrano in California each March, the airplanes built by the Waco Aircraft Company return to Troy, Ohio each September. However, before we get into these recent events, I think a little history about the aviation manufacturer is in order…

The Waco Aircraft Company can trace its roots to Lorain, Ohio in 1919, when  George “Buck” Weaver, Clayton Brukner, Elwood “Sam” Junkin, and Harold Deuther formed the Weaver Aircraft Company, better known by most of us simply as WACO. They decided to highlight Weaver’s name in the company title since he was well-known in the area at the time. Weaver was a flying instructor during WWI, and decided to make his fortune in aviation in the years which followed.

The Weaver Aircraft Company built its first four airplanes in Lorain. Two were flying boat designs, albeit unsuccessful ones. The third involved a small biplane which they never completed, while the fourth was a high-wing parasol type, known as the “Cootie”. Weaver tested the Cootie, making a number of successful flights before damaging the little airplane in a landing accident. At that point, Harold Deuther lost interest in the company and left. Brukner and Junkin rebuilt the Cootie, but reconfigured it as a biplane in the process. Weaver tested the aircraft, but then moved to Chicago to pursue another aviation opportunity. Brukner and Junkin were unsuccessful in selling the  updated Cootie and the Weaver Aircraft Company began to falter.

An opportunity for outside investment arrived when Brukner became acquainted with a man named Howard Calvert, son of J. T. Calvert, President and General Manager of the A. I. Root Company, a pioneer in the Honeybee Industry. Calvert convinced Brukner and Junkin to move their company to Medina, Ohio in 1922. There, the two men began work on a new design which they named the Waco Model 4. The Model 4 was a single bay biplane powered by a 90hp Curtiss OX-5. The aircraft’s unique feature was that it had seating for three people in the front cockpit. Although the airplane design was a success, it failed to attract any buyers, sadly. In 1922, a man named Bill Long contracted Brukner and Junkin to modify his Curtiss Canuck (a Canadian-built variant of the Curtiss Jenny) with Junkin’s “High Lift” wing design. Weaver returned to the company and requested his own example receive similar modifications. The company modified a further three Canucks, branding them as the Waco Model 5.

In December 1922, Weaver finally left the group for good. While on a train to Pennsylvania to buy surplus engines, Brukner became acquainted with a man named Cecil Deam, who mentioned that his friend Alden Sampson was set to inherit a large sum of money; both Deam and Sampson are from Tippecanoe City, Ohio. In February 1923, Brukner travelled to Pittsfield, Massachusetts to meet Sampson’s parents, hoping to convince them to help fund a new company. They agreed to purchase the assets of the Weaver Aircraft Company for $5,000, and in return, Brukner employed their son Alden, with the idea that he would learn a trade. They named the new company The Advance Aircraft Company, but even so, the name WACO was still painted on the aircraft. Wanting to be near Dayton, Ohio, then at the heart of America’s aviation industry, the group searched for an appropriate location to establish their new factory, settling on a building in nearby Troy, Ohio. Known as the Dilts Warehouse, the Pioneer Pole and Shaft Company had formerly occupied this building before The Advance Aircraft Company moved in during March, 1923.

Even with the Dilts Warehouse as their main building, the company occupied two other premises in Troy, but none by an airfield. Indeed, they pushed the airplanes down Union Street to a hayfield for final assembly and testing. Waco went on to build Models 6, 7, 8. 9, and 10 at these locations. The Waco 9 was their first commercially successful product; they built some 290 examples between 1925 and 1927. In 1927, the company introduced their Model 10, which enjoyed an even larger production run, with 1,200 of the type rolling off the factory lines between 1927 and 1930. With such success, it was clear that a new, more efficient factory was in order. Waco considered moving again, but the citizens of Troy endeavored to keep them on site. The city established the Citizens Keep Waco In Troy Committee, which raised sufficient capital to purchase local land which provided the company with room to grow. On January 28, 1928, the city paid a deposit on 90.39 acres of land and the new factory’s construction began that spring. During this period, the company renamed itself as the Waco Aircraft Company.

The Waco Aircraft Company remained at this location in Troy until 1965. Allied Industries bought the company in about 1960, establishing it as a new division within the corporation, however, they remained open to contract work with Clayton Brukner still serving as its President. However, this all came to an end in 1965 when Allied decided to close Waco and sell off its assets. The main factory is now a trucking warehouse, while the old Waco glider factory now houses Collins Aerospace.

The Waco Air Museum and Learning Center, now located about 2 miles from the original factory, arose from a group of individuals who wanted to preserve Waco’s legacy in Troy. They formed the Waco Historical Society in 1978 and found a small building in town to display artifacts from the Waco Aircraft Company. The Society began to blossom and began inviting Waco owners to gather their aircraft at a small grass airfield just outside of Troy each year on their way to the National Waco Club Fly-in at Hamilton, Ohio. In 1997, the society had raised sufficient funds to purchase enough land in Troy for both an airfield and a museum. Since then, the organization’s museum has grown substantially; they now have two hangars for display aircraft as well as a separate Learning Center. 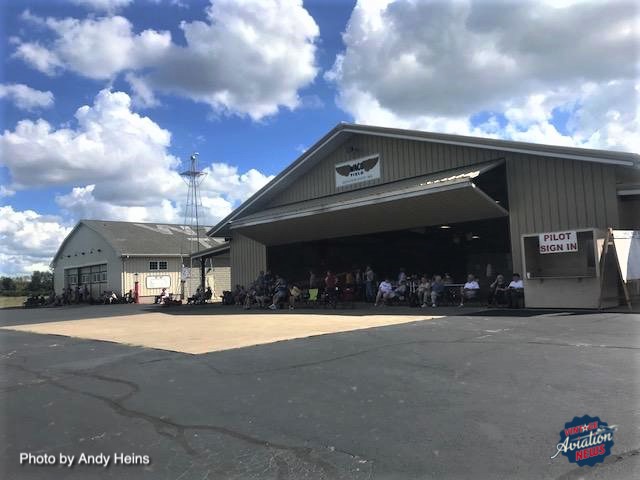 Each September the Waco Air Museum and Learning Center hosts a Fly-in. This year’s event took place over the long weekend of September 15-18, 2022. Blue skies were on order, with twelve Wacos returning to Troy for the celebration, which also included some 30 other vintage aircraft types. Two Wacos spent the day hopping rides for visitors who wanted the open cockpit experience. A Parade of Flight took place on Saturday, where most of the Wacos flew in the pattern while an announcer described each airframe and its history for the crowd. the museum also hosted a banquet that evening to help raise funds for the organization and give recognition those who flew in for the event.

The summery weather ensured that large crowds came to see the vintage Wacos and other beautiful aircraft on show. Thirteen Wacos were on site by Saturday, alongside with many other vintage aircraft and cars. The flying included a missing man formation along with the Parade of Waco’s. The Parade was followed by a radio-controlled model aircraft demonstration, with a candy drop from an RC helicopter for the children.

Visitors were able to walk around the aircraft, talk to the pilots and take pictures. Two Wacos were busy all day, providing flight experience to people. Children were able to ride in a tractor-pulled train or pretend that they were pilots in pedal planes. Food and ice cream trucks were set up next to a covered picnic shelter as well. In the evening, Tom Pawlesh set up special lights for nighttime aircraft engine runs for the photography enthusiasts on hand. For a $20 donation to the Waco Historical Society, Tom was able to create unique images of these beautiful aircraft for their owners.
The Waco Fly-In was a marvelous event to be a part of… so mark your calendars for the 2023 edition, which will take place between September 14th and 17th. Indeed, next year will be the Waco Aircraft Company’s centenary, so some major celebrations are in the works! The museum is hoping to have a hundred Waco aircraft fly in for the weekend, and with over half that number already signed up to attend, it should be one of the great aviation events of the entire year. The area has many sites for the aviation enthusiast nearby, from the National Museum of the United States Air Force at Wright-Patterson Air Force Base to the Dayton Aviation Heritage National Historical Park and the Aviation Trail Parachute Museum the area is worth visiting for a few days. Check out the National Aviation Heritage Area website at HERE for more information. The town of Troy also has a lot to offer with beautiful walking trails along the Miami River, interesting shops, and fantastic restaurants making the fly-in an enjoyable trip. For more information about the Waco Air Museum and Learning Center, please visit their website www.wacoairmuseum.org.