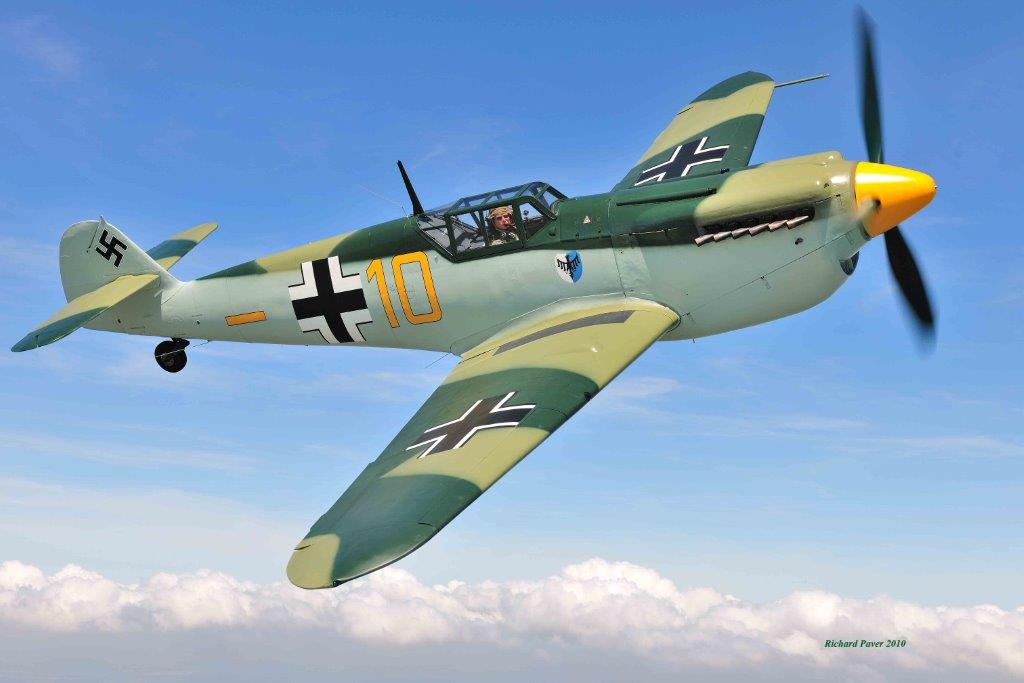 PRESS RELEASE – Wanaka:  Warbirds Over Wanaka International Airshow has announced it is bringing a significant aircraft to Wanaka next year to mark the 75th anniversary of the Battle of Britain.Warbirds Over Wanaka General Manager, Ed Taylor, says the UK-based Messerschmitt Bf 109 will take part in a number of aerial displays, alongside it’s Battle of Britain nemesis, the Spitfire, during the Warbirds Over Wanaka event at Easter next year.“There are only a handful of these magnificent aircraft still flying today so this is a major coup for us and helps reaffirm our status as one of the world’s best Warbirds airshows.”It will be 20 years since a Me 109 has flown in New Zealand.   The last time was also at Warbirds Over Wanaka in 1996 when airshow founder Sir Tim Wallis brought one out.  This could well be a once-in-a-lifetime opportunity for many.  It’s expensive to keep these old aircraft flying and to bring them half way around the world is no easy task,” said Ed.Ed said Warbirds Over Wanaka could not have brought the Me 109 to Wanaka without the generous support of companies like Stevens Kitchenwares and Hambug Sud shipping.“The  Me 109 holds the record for being the most produced fighter aircraft of all time with a total of 33,000 built.  There are quite a few still in museums around the world but only a handful are still flying,” said Ed.

The aircraft which is coming to Wanaka next Easter is something of a movie star, having flown in the 1968 “Battle of Britain” movie and then 20 years later starring alongside Tom Cruise in “Valkyrie”.The aircraft is owned by the Aircraft Restoration Company (ARC) based at Duxford in England.  It will be piloted in Wanaka by ARC owner John Romain.John is excited about coming to Wanaka.   “It has been on my wish list for some time to bring the Me 109 out to New Zealand and perform at the famous Warbirds Over Wanaka airshow, it ticks a lot of boxes for me,” said John.John said the aircraft performs at many airshows in Europe and has been especially busy in the United Kingdom over the past few months taking part in numerous Battle of Britain 75th anniversary celebrations.“I am sure there will be thousands of New Zealand and Australian airshow fans who will be very excited about the prospect of seeing the 109 going up against a Spitfire once again,” said John.John is one of the UK’s top Warbird pilots with many hours flying both the Me 109 and Spitfires.John explains the main differences between the two aircraft.“The 109 is a smaller aircraft than the Spitfire, both in terms of its physical size but also the cockpit is much smaller for the pilot.However, once flown, and the handling qualities are known and accepted, it is a tremendous fighter to fly. I can see why the German pilots liked it so much!The Spitfire is certainly easier to fly than the 109, lighter on the controls and much more relaxing in the take-off and landing phase. The German pilots became “tired” when flying the 109 due to its physical requirements but also its mental requirements.For combat, this alone would point me towards the Spitfire if I was going to war.   Having said that the 109 has wonderful qualities as a fighter and as an aircraft generally.  A pleasure to fly.”

The Warbirds Over Wanaka Community Trust is keen to use the visit of the Me 109 to further the Trust’s mission “to educate through the celebration and promotion of aviation past and present”.   Organizers will be including the celebration of the 75th anniversary of the Battle of Britain in the airshow free schools program.Warbirds Over Wanaka International Airshow is being held from March 25th to 27th, 2016.  For more information and tickets go to www.warbirdsoverwanaka.com