Another fantastic AirVenture Oshkosh is in the books, and 2017 broke a number of records according to the EAA. For starters, the attendance was at an all-time high for the show, with roughly 590,000 people visiting, but we will let the EAA’s press release speak to those details. AirshowStuff.com has kindly provided photos and video to allow those who did not attend AirVenture. Enjoy!

AirVenture never fails to bring rare and even unique acts and events, and so it was this year as well. For warbird enthusiasts, perhaps the biggest of these was the long-anticipated Boeing B-29 Superfortress formation flight between the Commemorative Air Force’s B-29 “FIFI” and Doc’s Friends B-29 “Doc.” After a week practicing formation flying together, the two iconic bombers performed a majestic formation pass right in front of the crowd on the Saturday. History was made!

Another historic flight that probably hasn’t happened in the USA since the 1940s was the glorious three-ship Bell P-63 Kingcobra formation. It would have been a Cobra four-ship, but unfortunately the CAF’s P-39 had mechanical issues and couldn’t join the other three Bell fighters. The Kingcobra Flight comprised the CAF Dixie Wing’s recently restored P-63A (piloted by Mark Todd), John Bagley’s P-63C-5 and the Kingcobra from the CAF P-63F Sponsor Group (piloted by Craig Hutain). The P-39Q flew only on Wednesday for a photo mission with the other two CAF Kingcobras. The airplane is operated by the CAF Central Texas Wing. 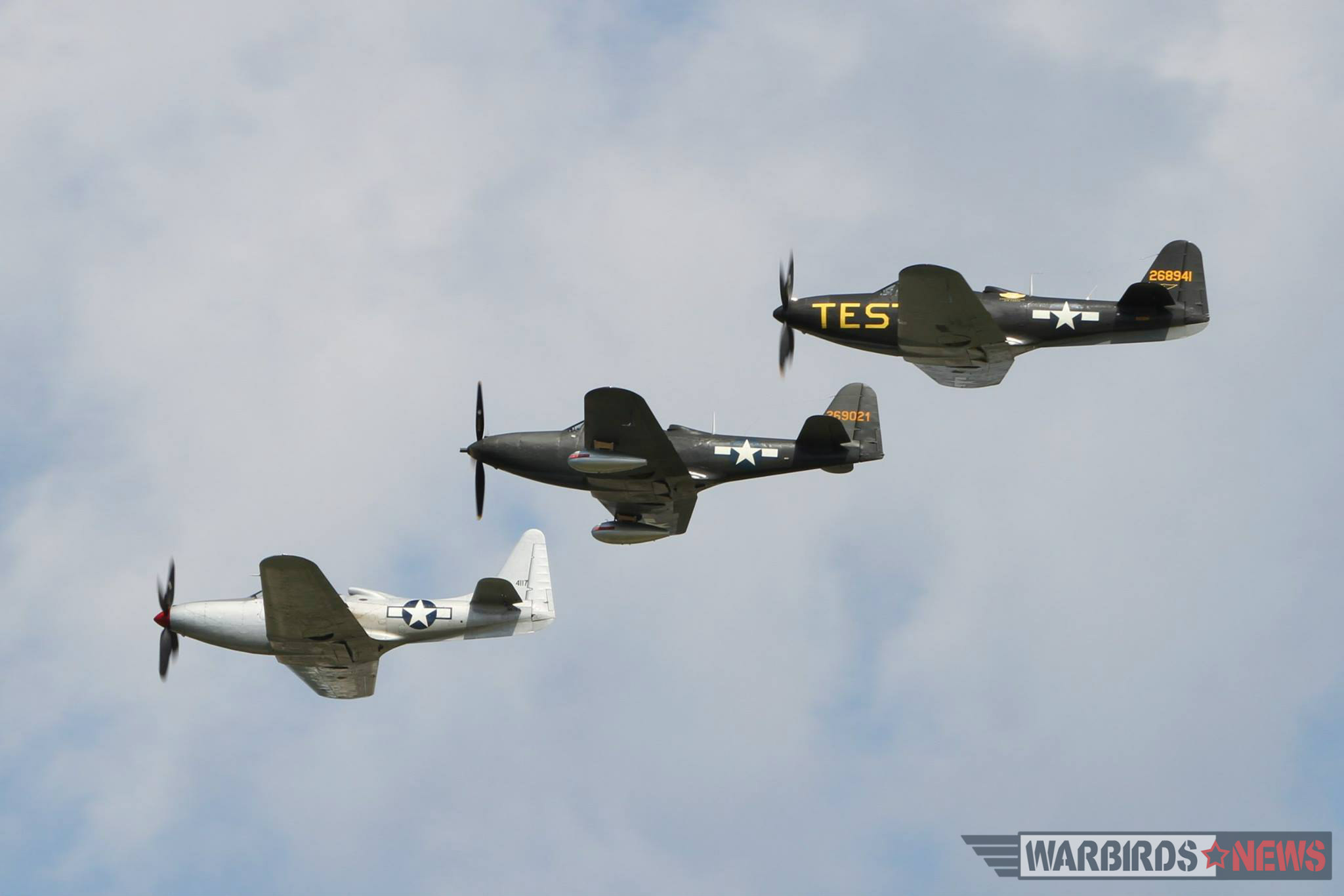 Lt Col Dick Cole, the last living veteran of the famed Doolittle Raiders mission of April 1942 was on hand at Oshkosh to help celebrate the mission’s 75th anniversary. As part of the commemoration, a significant number of North American B-25 Mitchell bombers, the type used in the Doolittle Raid, were also in attendance at AirVenture. On Wednesday at least nine Mitchells parked on Warbird Alley, arranged in a specific pattern to resemble the way they would have been placed on the deck of the aircraft carrier USS Hornet back in 1942. Lt Col Cole waved at each crew as the bombers taxied by on their way to the runway for the air show act representing the raid.

It really was a fantastic year for warbirds specifically…

From the EAA’s press release… EAA Chairman Jack Pelton stated, “What an incredible year it was at Oshkosh. From the U.S. Navy Blue Angels and Apollo reunion, to new aviation innovations on display and two B-29s flying formation as part of 75 years of bombers on parade, it was a week filled with “OnIy at Oshkosh” moments. You could feel the energy as thousands of airplanes arrived early and stayed longer, pushing aircraft camping to capacity for most of the event. The aviators and enthusiasts who attended were engaged, eager, and passionate, demonstrating how Oshkosh is the best example of why general aviation is so vitally important to the country. I believe it’s the best AirVenture week that I’ve ever seen.”

The number of visitors, approximately 590,000, is an increase of five percent over 2016. Pelton remarked,“The combination of our features and attractions, along with great weather for six of the seven days, made for an excellent week. That kind of success also created challenges in parking, camping and traffic, but I’m proud of the determination and ingenuity of our 5,000 volunteers who rose to tackle those difficulties and create an event where unforgettable aviation experiences can happen.”

More than 10,000 aircraft arrived at Wittman Regional Airport in Oshkosh and other airports in east-central Wisconsin. At Wittman alone, there were 17,223 aircraft operations in the 10-day period from July 21-30, which is an average of approximately 123 takeoffs/landings per hour.

More than 11,600 sites in aircraft and drive-in camping accounted for an estimated 40,000 visitors throughout the week.

Social Media, Internet and Mobile: More than 15.4 million people were reached by EAA’s social media channels during AirVenture (double the 2016 total); EAA AirVenture app had 1.7 million screen views; EAA video clips during the event were viewed 2.1 million times; and EAA’s 1,900 photo uploads were viewed more than 9.8 million times. Also, EAA web streams were accessed more than 500,000 times by viewers in 192 countries, who watched more than 110,000 hours of activities from the AirVenture grounds.

q  “We’re already talking to people about the possibilities for 2018 in all areas, from aircraft anniversaries to new technology and innovations. We saw new programs, such as the Twilight Flight Fest following the afternoon air show, attract big crowds and show a bright future. We’ll be announcing these features and attractions as they are finalized. We’re also going to continue working hard on the visitor experience to maintain EAA’s high standards. We’re excited for the future and what’s ahead for next year!”