Celebrating the 80th year marking the formation of RAF Fighter Command, the Imperial War Museum’s Meet the Fighters air show over the weekend of September 10th/11th highlighted a wonderful selection of Royal Air Force fighters from World War I to the present day at Duxford aerodrome, near Cambridge, England. Unfortunately, Saturday was a washout due to rain, but Sunday’s blue skies provided the perfect backdrop for a great aerial display.

Ironically, since the event was ostensibly to commemorate the RAF, the show opened with a pair of naval fighters! Leading the opening formation were Air Leasing’s Hawker Fury and The Fighter Collection’s Grumman F8F Bearcat put on a tight aerobatic display. Both fighters represented late war designs, at the peak of piston-engine design. Every time they flew by, the Fury’s Bristol Centaurus growled against the Bearcat’s equally formidable Pratt & Whitney R-2800 Double Wasp engine, producing the most remarkable sound.

The Great War Display Team provided a multi-aircraft World War I display, complete with numerous bursts of ‘archie’ over the field. Two scaled-down replica Royal Aircraft Factory SE5s and a BE2C twisted and turned with a brace of Junkers CL1s and a pair of full-scale replica Fokker DrIs in an impressive simulation of a World War I dogfight.

Moving back to the World War II piston engine era, a pair of Spanish-built Hispano Buchons from Spitfire Ltd. and Historic Flying Limited flew a spirited aerobatic display. This was followed by two Spitfire Mk Ias from Comanche Fighters and Historic Flying chasing a single Buchon to honor those who flew and fought over Dunkirk in May/June, 1940.

World War I was again center stage as the WWI Aviation Heritage Trust’s Sopwith Snipe was joined by the Shuttleworth Collection’s Bristol F2B. Shuttle worth’s Bristol Fighter dates from 1918, and was the only original World War I aircraft flying at the show.

To honor RAF Training Command’s wartime and post-war contribution a North American Harvard IV and two de Havilland DHC-1 Chipmunks graced the stage. Working as a tight pair the Chipmunk duo performed loops and rolls as the Harvard did similarly, all in the same airspace.

The Battle of Britain Memorial Flight’s Avro Lancaster B.I injected a dose of heavy metal, with its four Rolls-Royce Merlins singing a well-known tune to the Duxford crowd.

The Fighter Collection’s FG-1D is a mainstay at Duxford. Originally paired with M. Davy’s Yak-3, the Corsair performed solo as the Russian fighter unfortunately had to bow out shortly after take-off due to an engine problem.

One of the more unusual displays of the day was the fighter gunnery training presentation. A Piper Cub towed a drogue on a long cable while the Historic Aircraft Collection’s Hurricane Mk.XII made repeated firing passes from different angles and heights.

Representing the early Cold War era, three aircraft from the Norwegian Air Force Historical Squadron added the first turbojet roar to the day. First off was the Mikoyan-Gurevich MiG-15UTI followed by the paired-launch of a de Havilland Vampire FB.52 and a Vampire T.55. The MiG provided a solo routine followed by the two twin-boomed Vampires in a two-ship aerobatic display.

Representing the rescue of many downed airmen during World War II, Plane Sailing’s PBY Catalina (actually a Canadian-built Canso A) put on a vigorous display. With its huge wing, the PBY proved remarkably maneuverable.

The Boeing B-17 Flying Fortress known as ‘Sally B’ is a crowd favorite at Duxford and gave its well-known display. RAF Fighter Command Spitfires often escorted US 8th Air Force B-17 missions in 1942, which explained the heavy bomber’s appearance at the show.

The highlight of the show was the glorious massed formation of fourteen Spitfires. Duxford is the only place in the world where you can witness this type of historic assembly. Not only is fourteen Spitfires in formation an amazing sight, but also within that formation was the complete history of Britain’s most iconic fighter: four Mk.Ias, three Mk.Vs, two Mk.IXs, two Tr.9s, a Mk.XVI. a Griffon-engined Mk.XVIII, and a Seafire LF.III. After several passes, the formation broke up into three distinct acts. While six Spits provided a lovely figure 8 tail chase in back from the flight line, two separate flights of three Spits each roared across the center line with each flight coming in from opposite directions, many times simultaneously! Low and fast it was a wonderful display of airmanship and flying prowess that you can only find at Duxford.

And if that wasn’t enough, the final act was the world famous Royal Air Force Red Arrows aerobatic display team!

This was a fitting end to the Imperial War Museum’s flying season. The variety of fighter aircraft from so many eras was truly amazing and is unique to the famed Duxford airfield.

Currently he is writing and producing full-length aviation documentaries for the on-line broadcaster Aerocinema.com. He has also written articles for Flight Journal, Aviation History and Aeroplane Monthly. 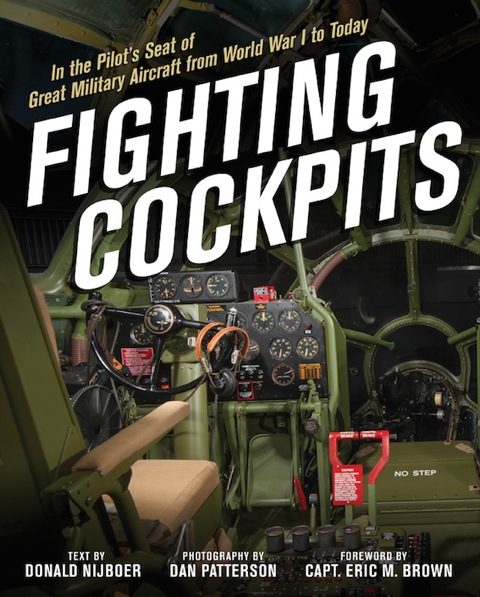