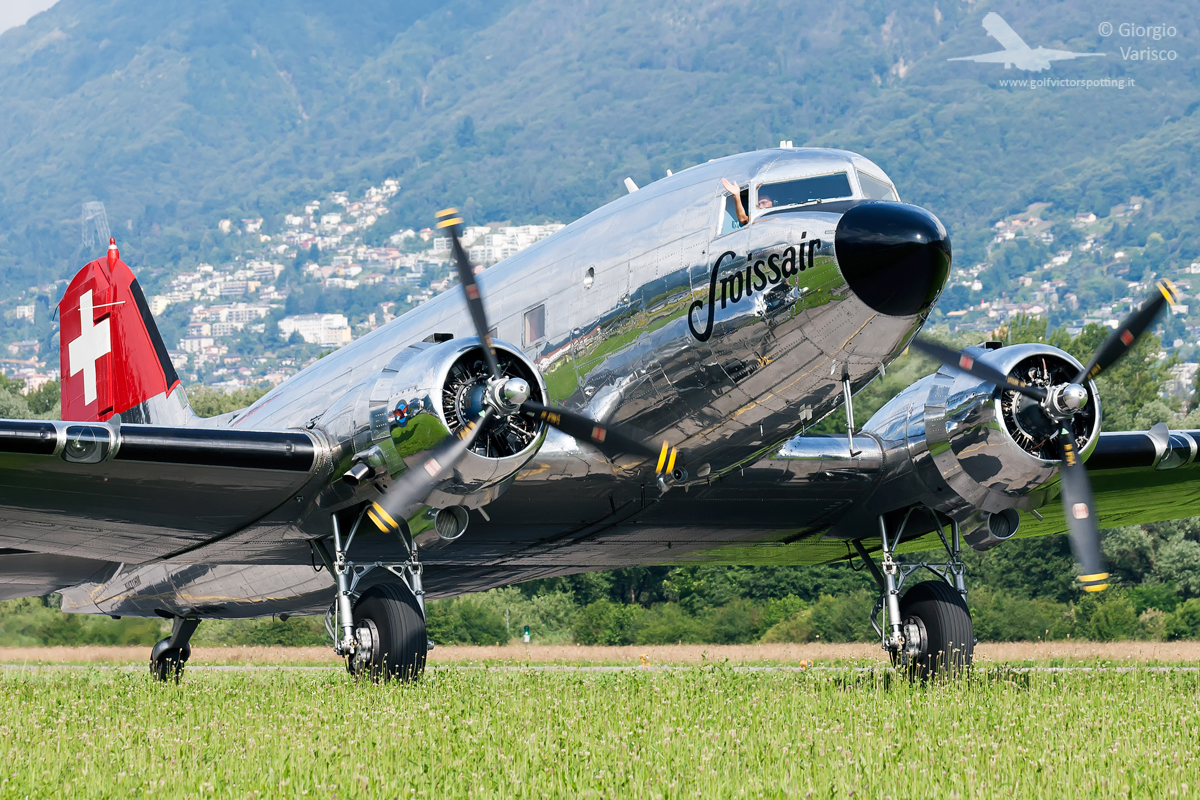 From May 20th to June 1st, Locarno airport in Switzerland, just north of Milan, Italy, hosted several events to celebrate its 75th anniversary. The airfield hosts a mixture of general aviation and military aircraft. The main celebration centered around the Cielo Aperto (Open Skies) air show held over the weekend of May 31st/June 1st. The display featured several warbirds and vintage aircraft, as well as general aviation and Swiss Air Force assets.

Classic Formation opened the show with their stunning Swissair Douglas DC-3(C) and two bare-metal Beech D18S, which returned in the afternoon for a formation fly-by. 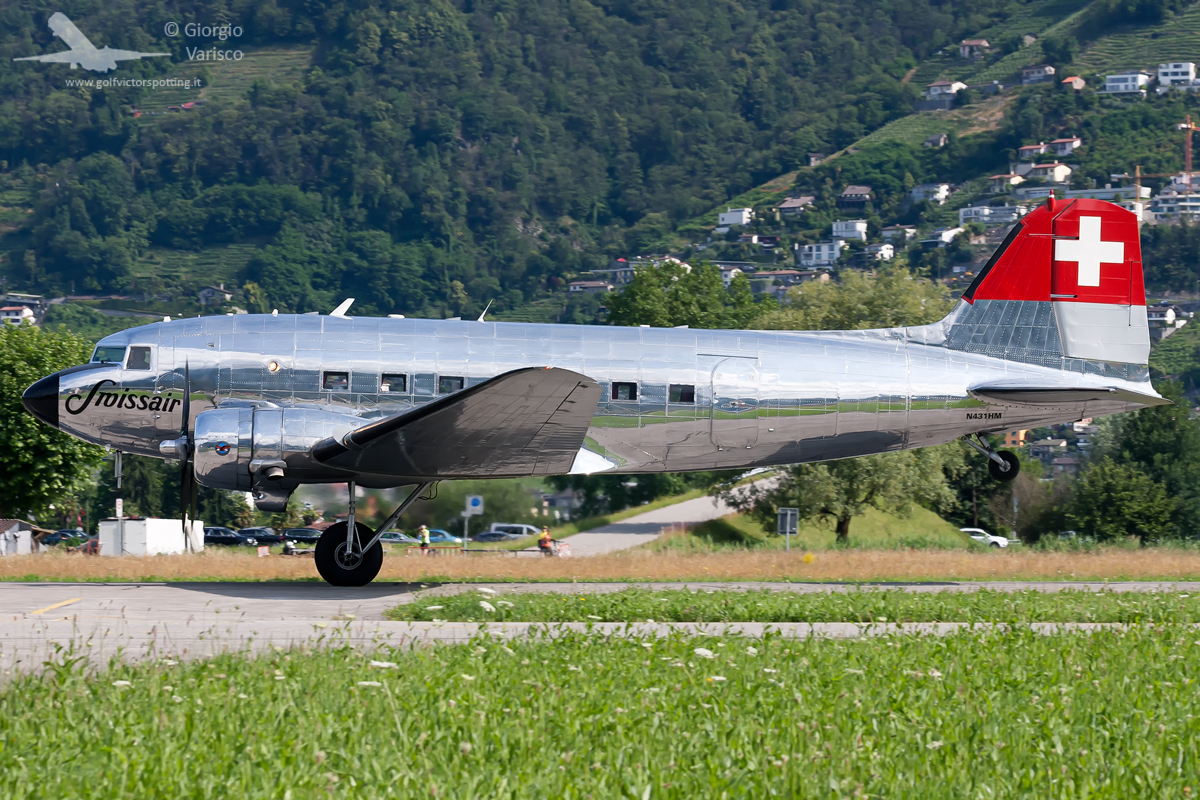 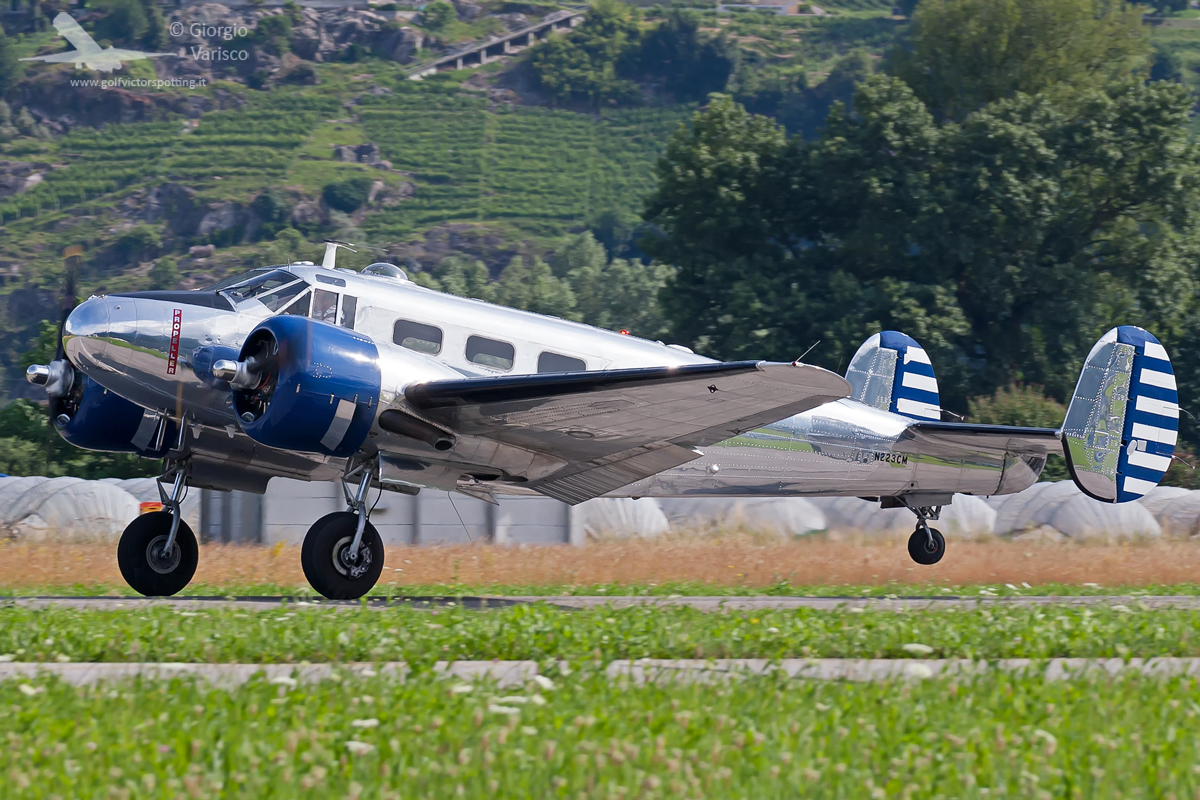 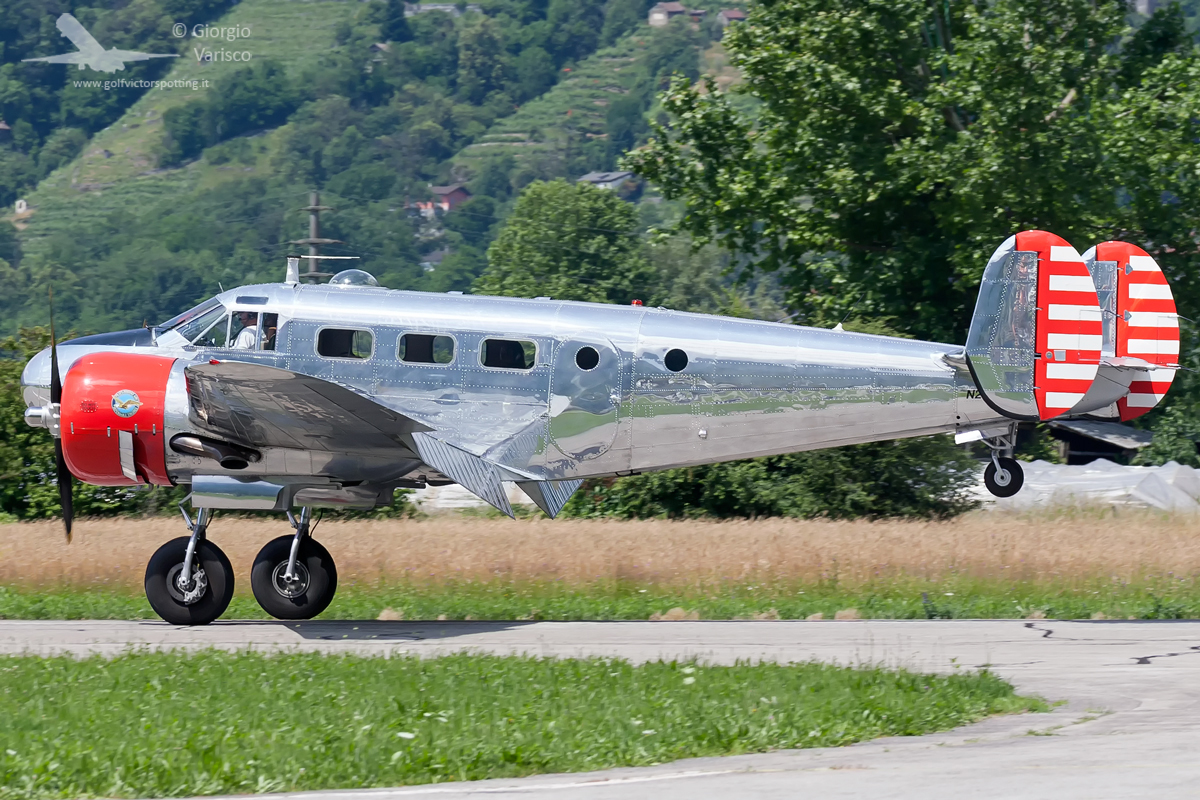 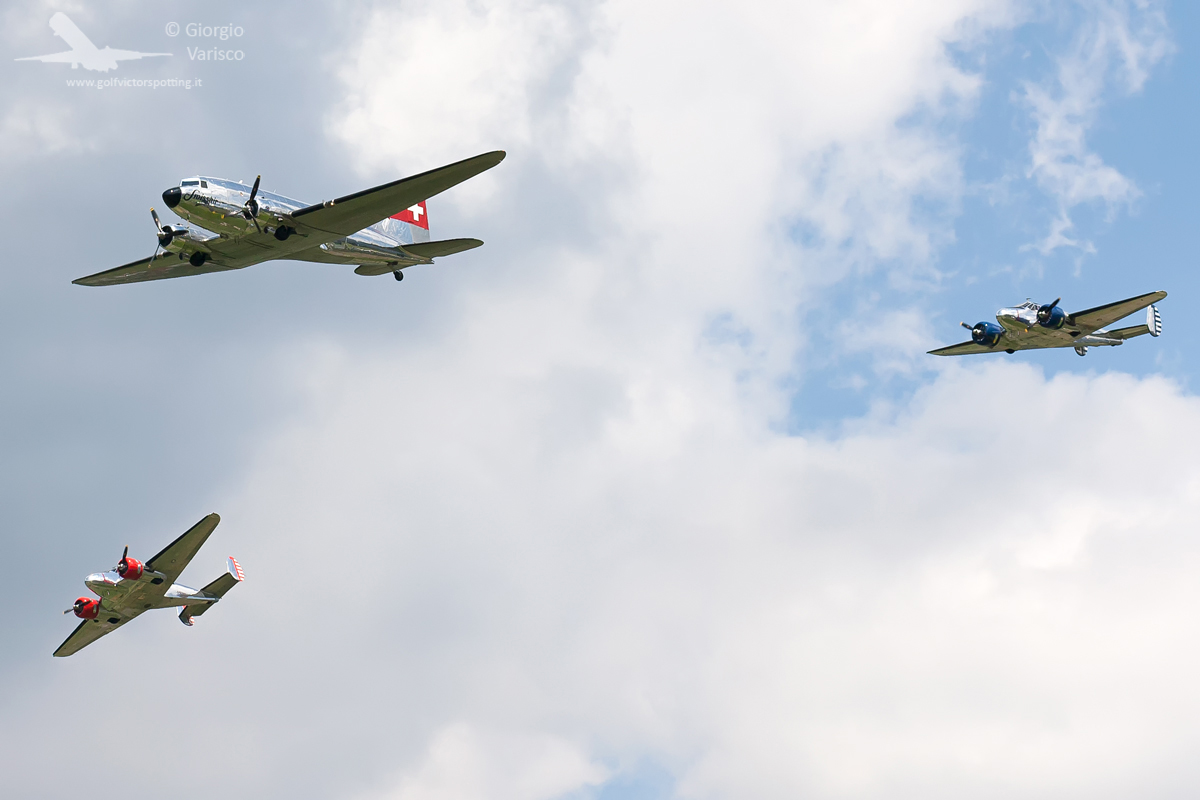 Then the Swiss Bücker Squadron took off with their five WWII-era, German-designed biplanes: a CASA 1-131E Jungmann, two Doflug Bu-133C Jungmeisters and two Doflug Bu-131B Jungmanns. As most will know, CASA of Spain and Doflug (Dornier Werke) of Switzerland license-built several German designs during, and just after WWII. 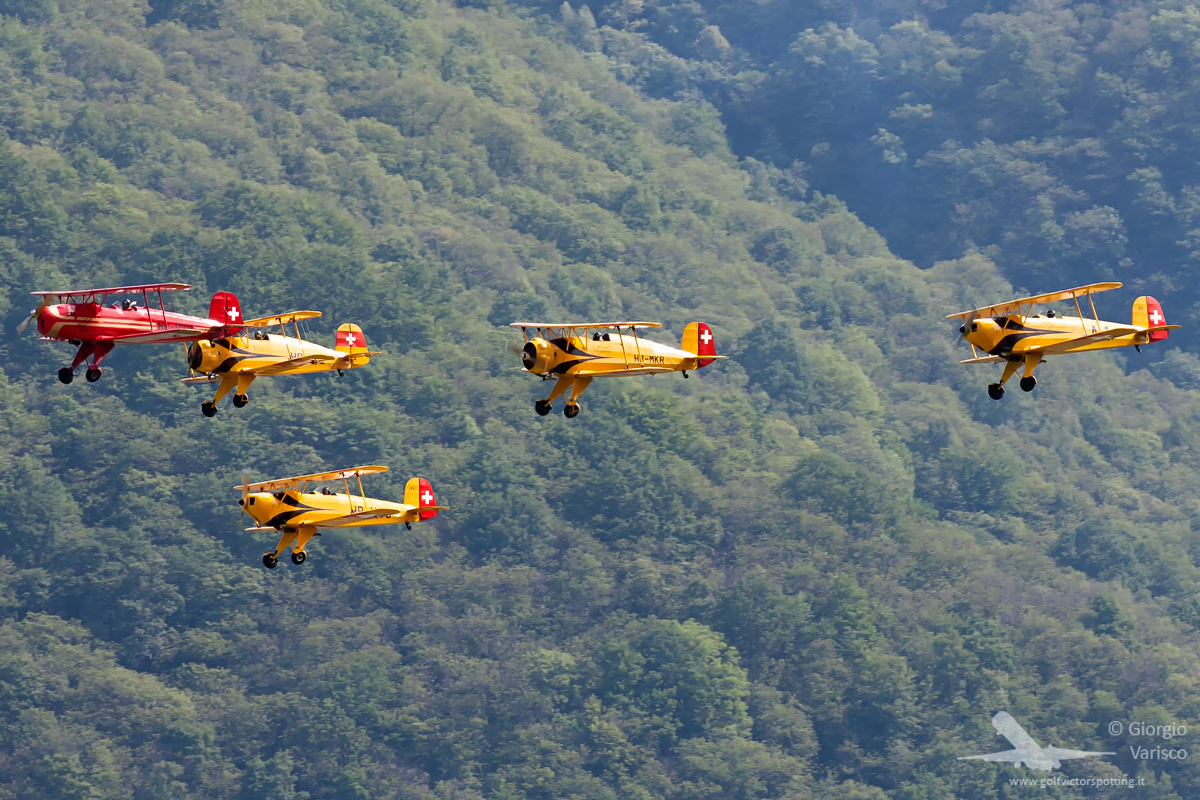 After some helicopter demos by the Swiss Air Force and JetMan’s flight, the Fliegermuseum Altenrhein (Altenrhein Flying Museum) sent two of its airworthy jet warbirds; a  DH.115 Vampire T.55 (license-built by F+W in Emmen), and a Hawker Hunter T Mk.58. The Hunter wears a tiger livery dedicated to the Swiss Air Force’s Fliegerstaffel 11. 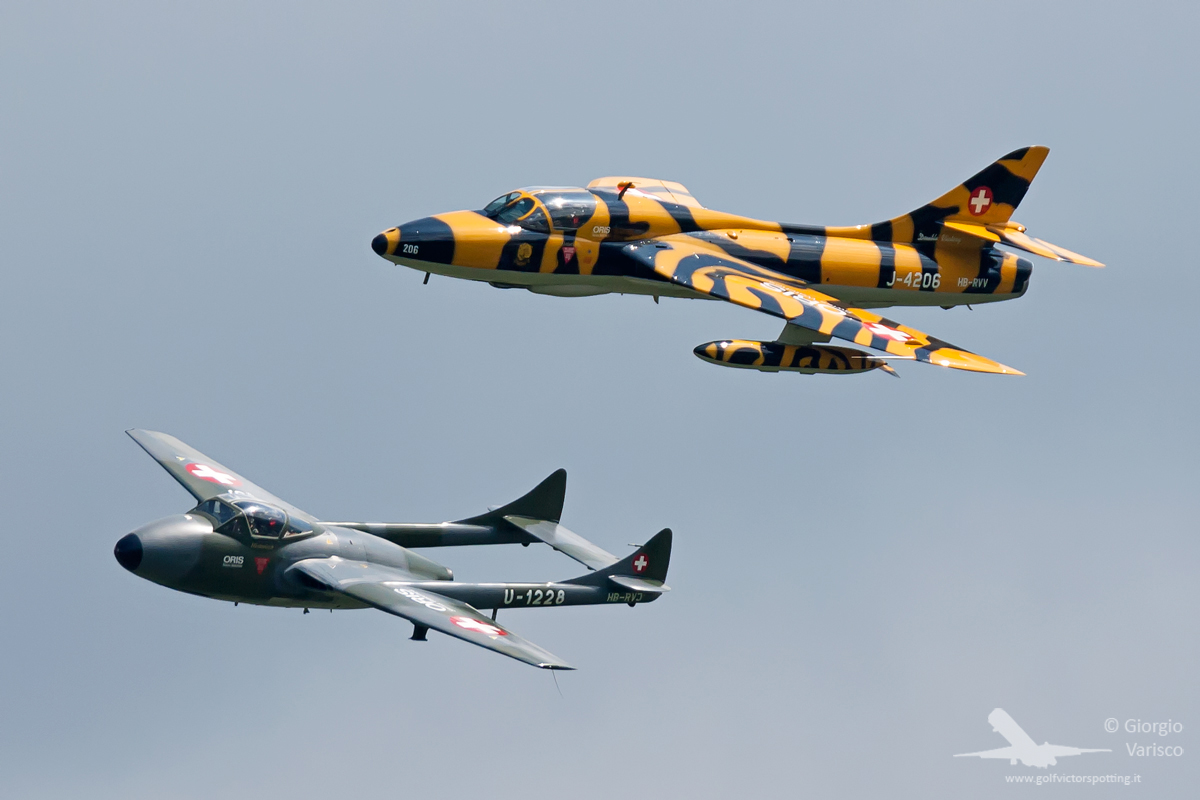 A Junkers Ju-52/3m g4e, one of four operated by Ju-Air, performed touristic flights above the Magadino Plain and Lago Maggiore. In the early afternoon it took off with seventeen paratroopers on board, three of whom carried flags representing Switzerland, the Canton of Ticino and the Swiss Air Force. Upon landing, the three flags were hoisted during a speech by the airfield’s military commander, colonel Tiziano Ponti. 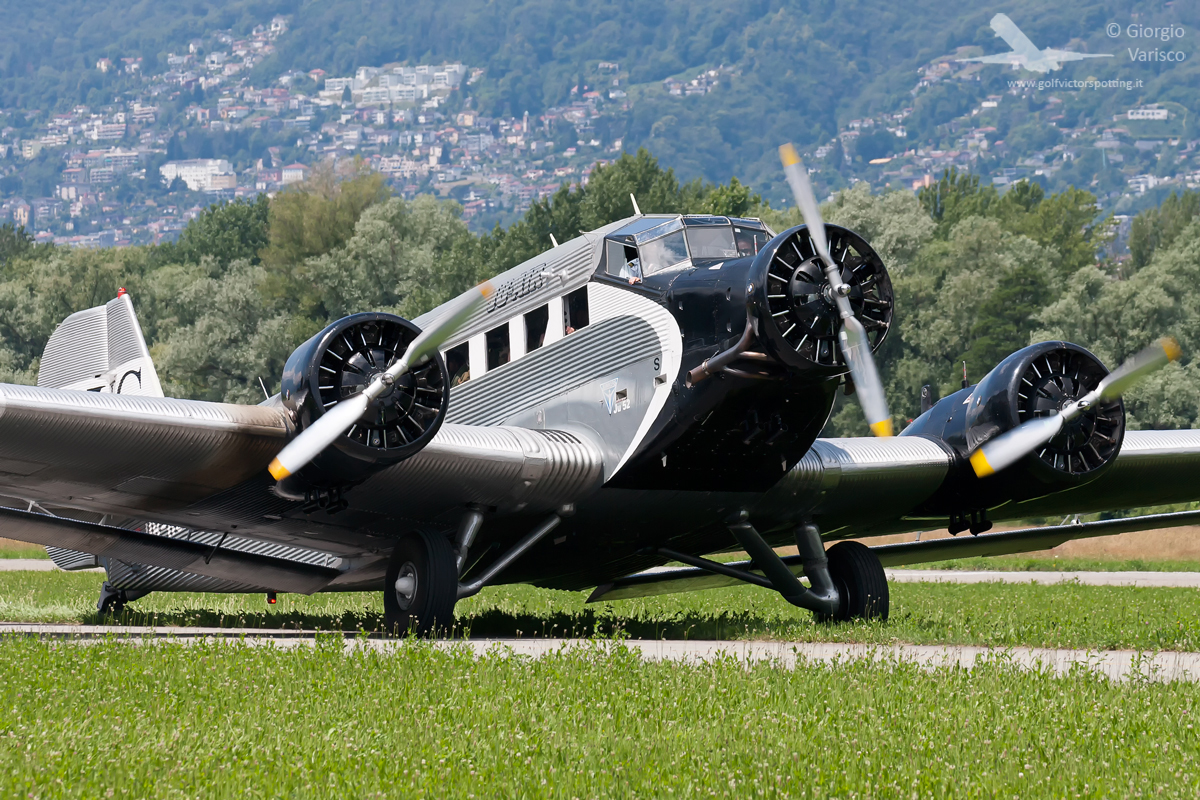 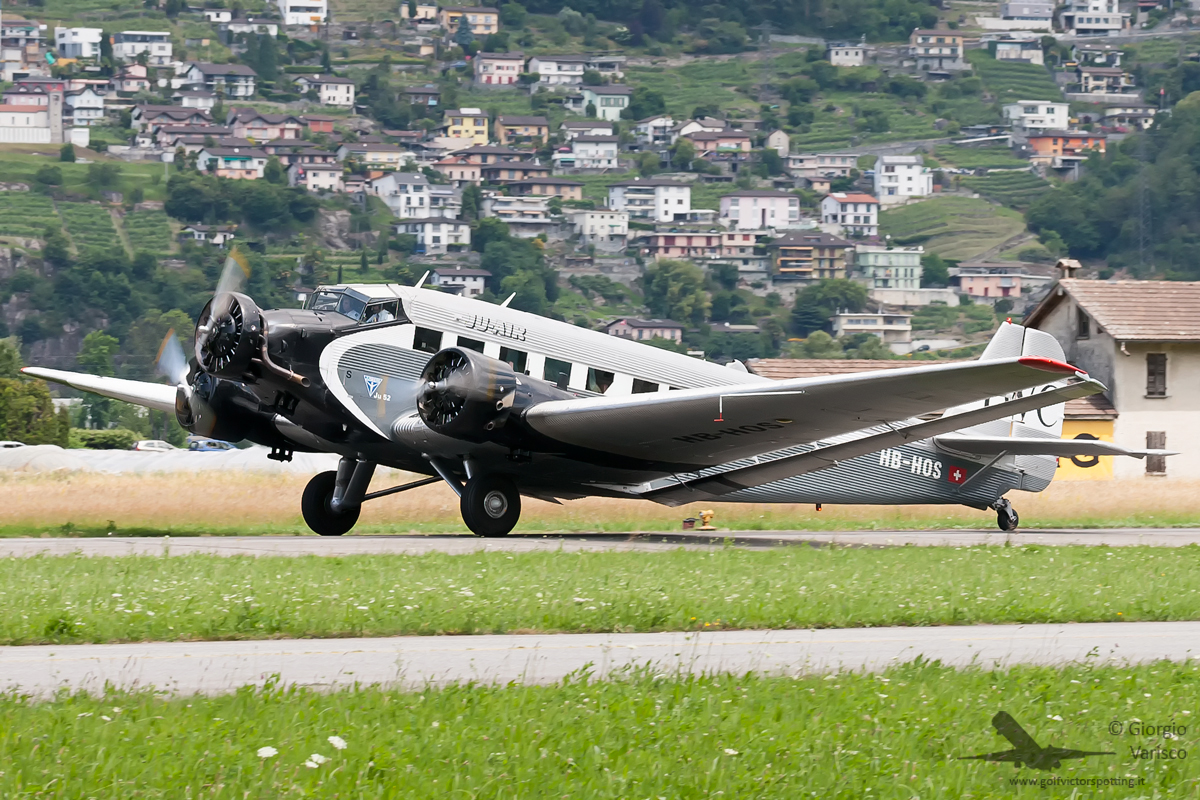 A very rare, German-built Messerschmitt Bf.108B-1 Taifun also took part in the air show (see below). This was one of fifteen Taifuns bought by the Swiss Air Force in 1938 and used for liaison duties and as trainers for pilots of Swiss Bf.109s. Retired in 1959, the aircraft was on display in Zürich-Kloten airport for 30 years before  the Association pour le Maintien du Patrimoine Aéronautique bought and restored her to airworthiness. 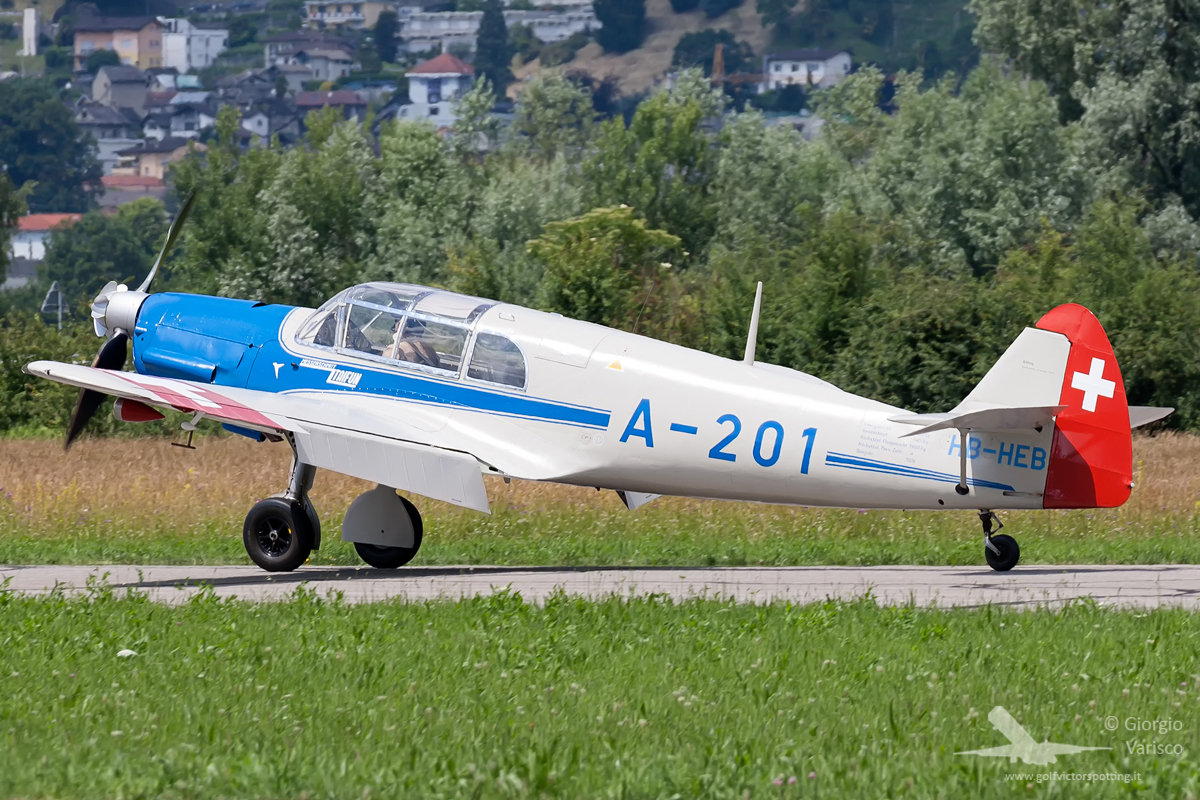 For the target towing demo, the past and the present of Swiss Air Force’s towing aircraft flew above Locarno. A F+W C-3605 Schlepp represented the past (see below). The unusual aircraft is a turboprop conversion of the WWII-era Swiss-designed and built C-3603 ground-attack variant. Since turboprop engines have a far higher thrust-to-weight ratio than their piston counterparts, the conversion required a much longer nose in order to maintain an appropriate center of gravity. 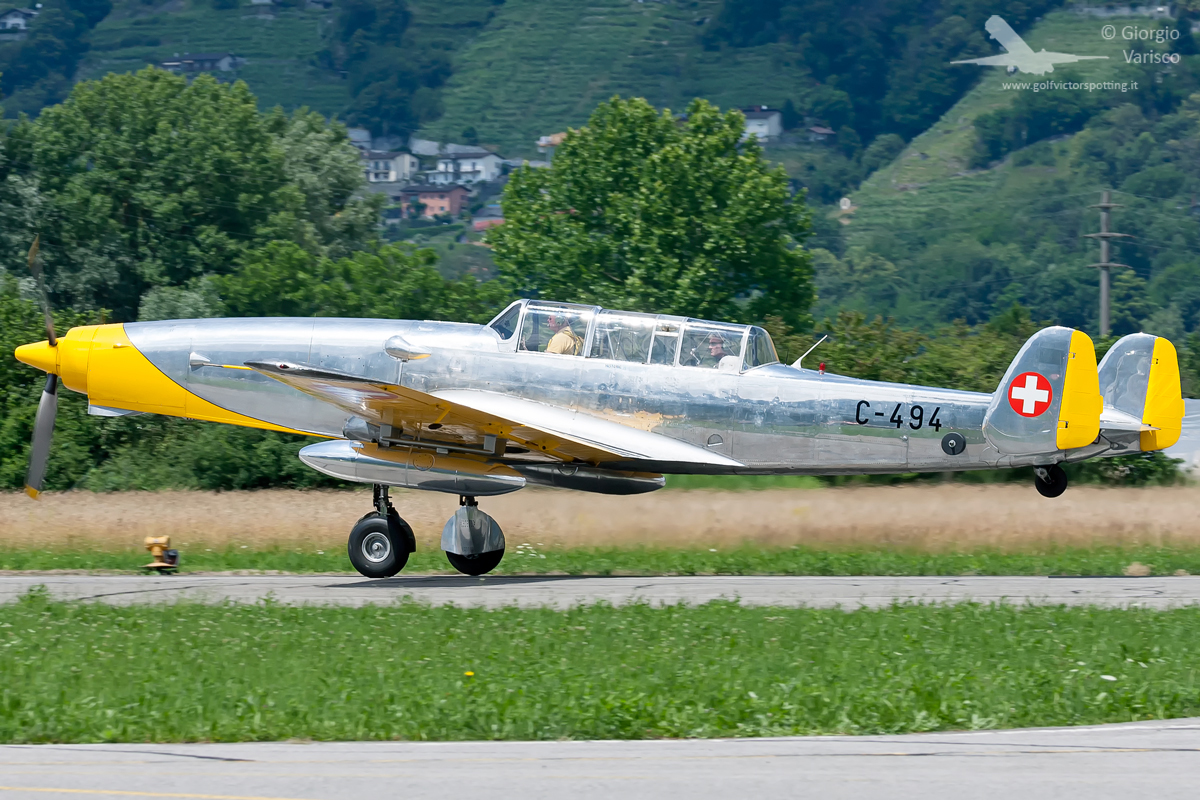 The uniquely airworthy EKW D-3801 was also on display (see below). The WWII fighter aircraft is a Swiss licence-built version of the Morane-Saulnier MS.412.  Along with Messerschmitt Bf.109s, they defended Swiss neutrality during World War Two, forcing every foreign aircraft straying into Swiss airspace to land. Swiss WWII fighters carried visible red and white stripes on the wings in order to be easily identified as Swiss fighters by foreign aircraft. 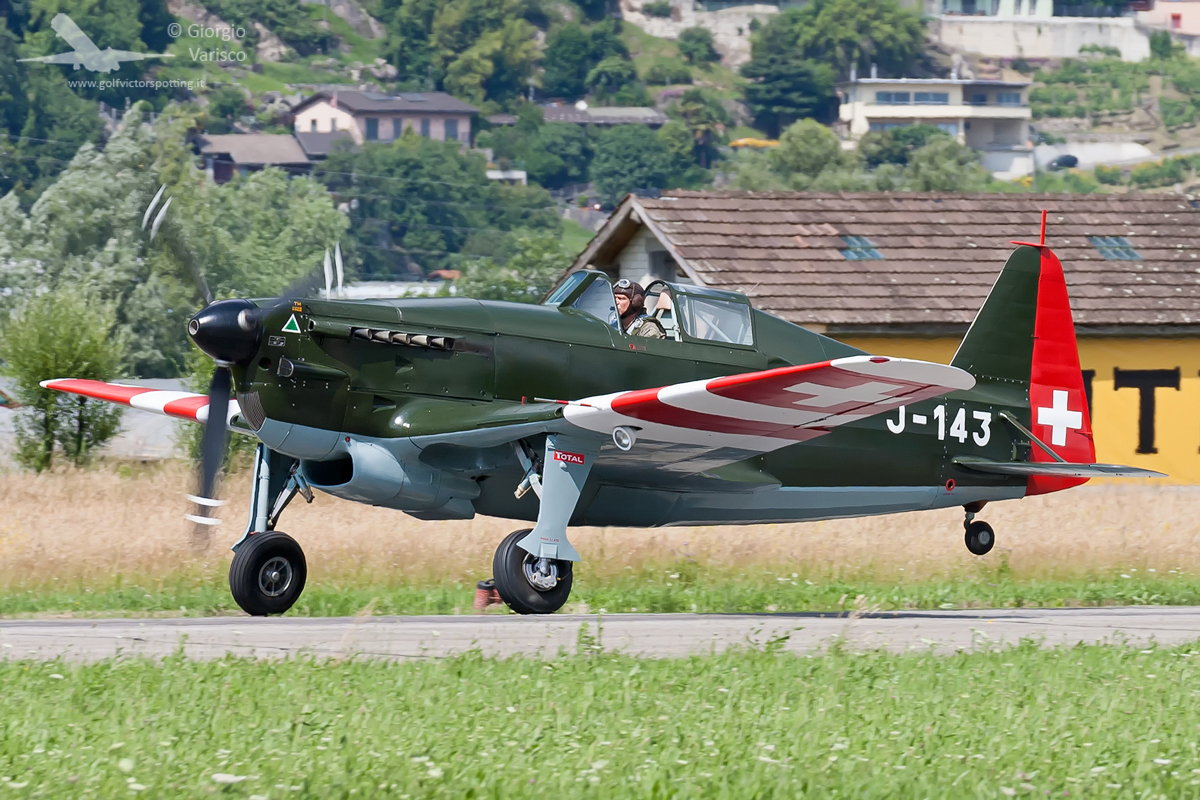 Another unusual visitor was “Lucky Lady VII”, a North American P-51D Mustang (see below). Built in 1945 it served in the USAAF and later the Nicaraguan Air Force. Meier Motors of Eschbach, Germany restored her to tip-top condition between 2007 and 2008. 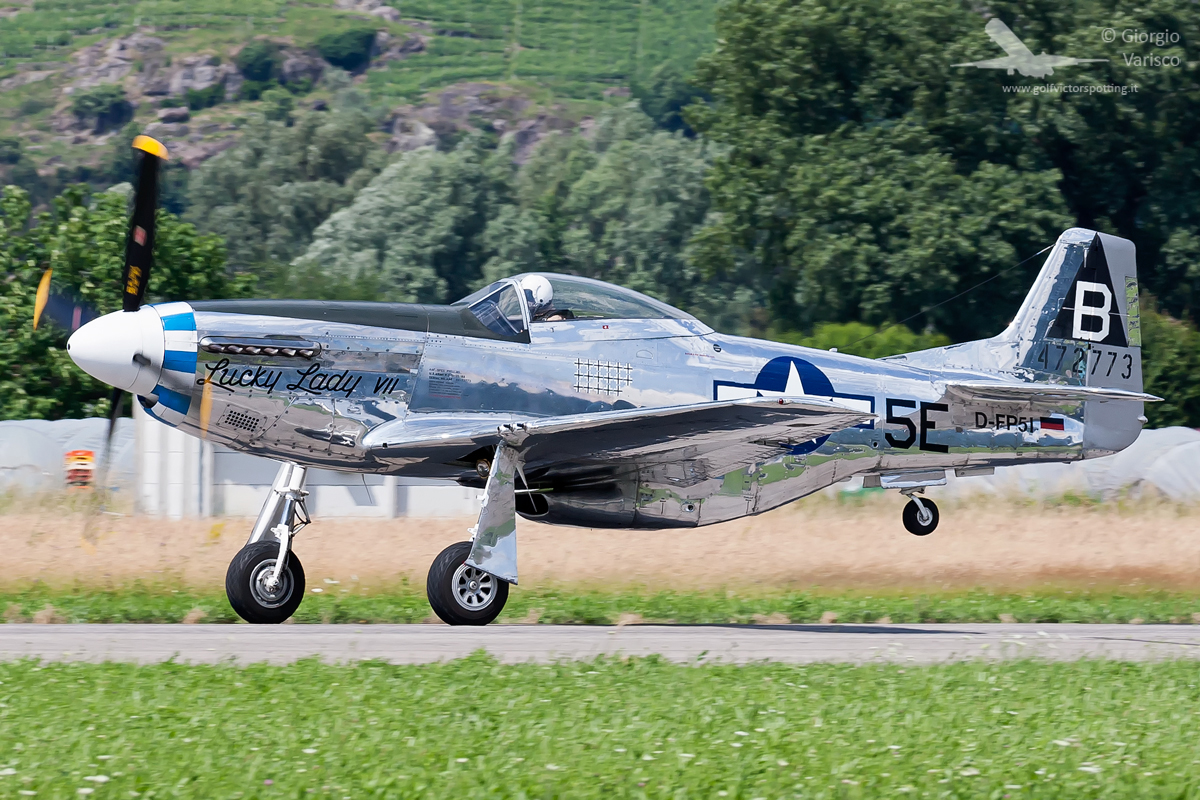 A Hispano HA-1112-M1L Buchon also took part in the display (see below). The aircraft, as most will know, is a Spanish licence-built version of the German Messerschmitt Bf.109. The major difference between the Spanish and German versions is that the Buchon uses a Rolls-Royce Merlin engine instead of the original Daimler-Benz DB-605. This particular airplane was used for the movie “Battle of Britain” disguised as a Bf.109, and currently wears those same “movie markings”. 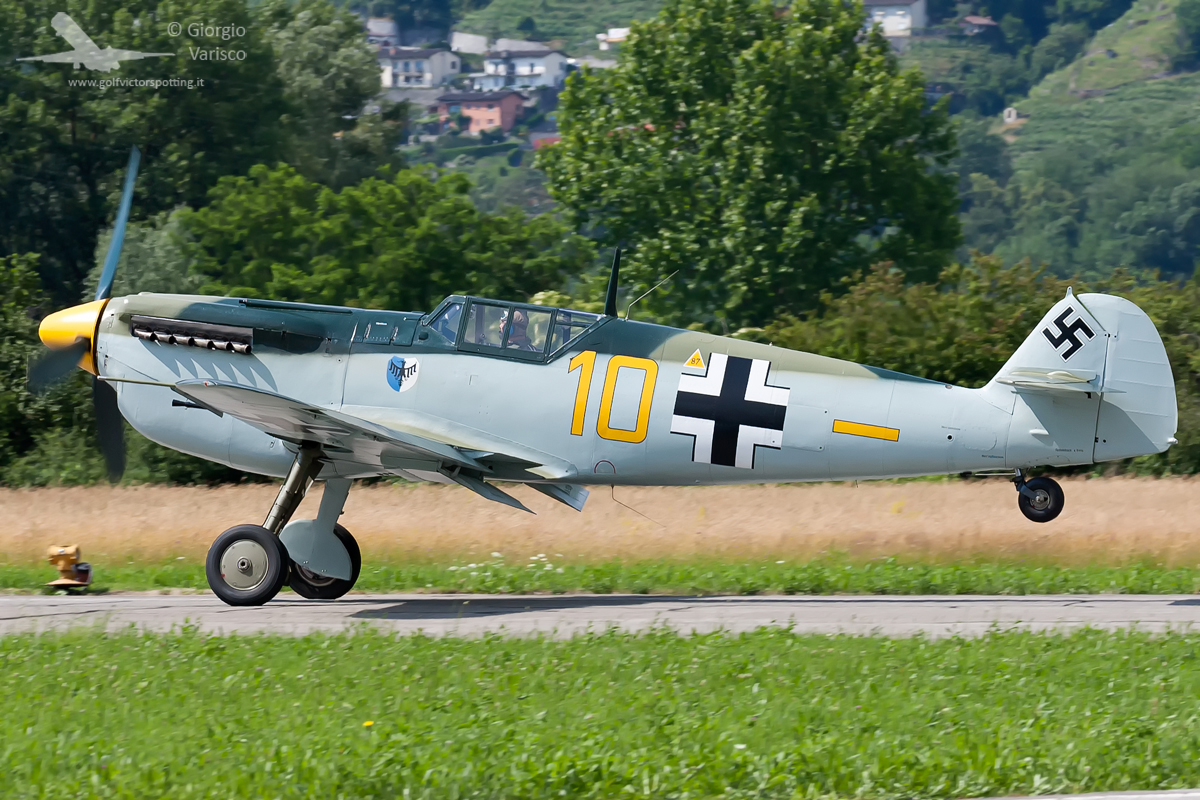 The last warbird at Cielo Aperto was a rare two-seater Supermarine Spitfire T Mk.IXC (see below). 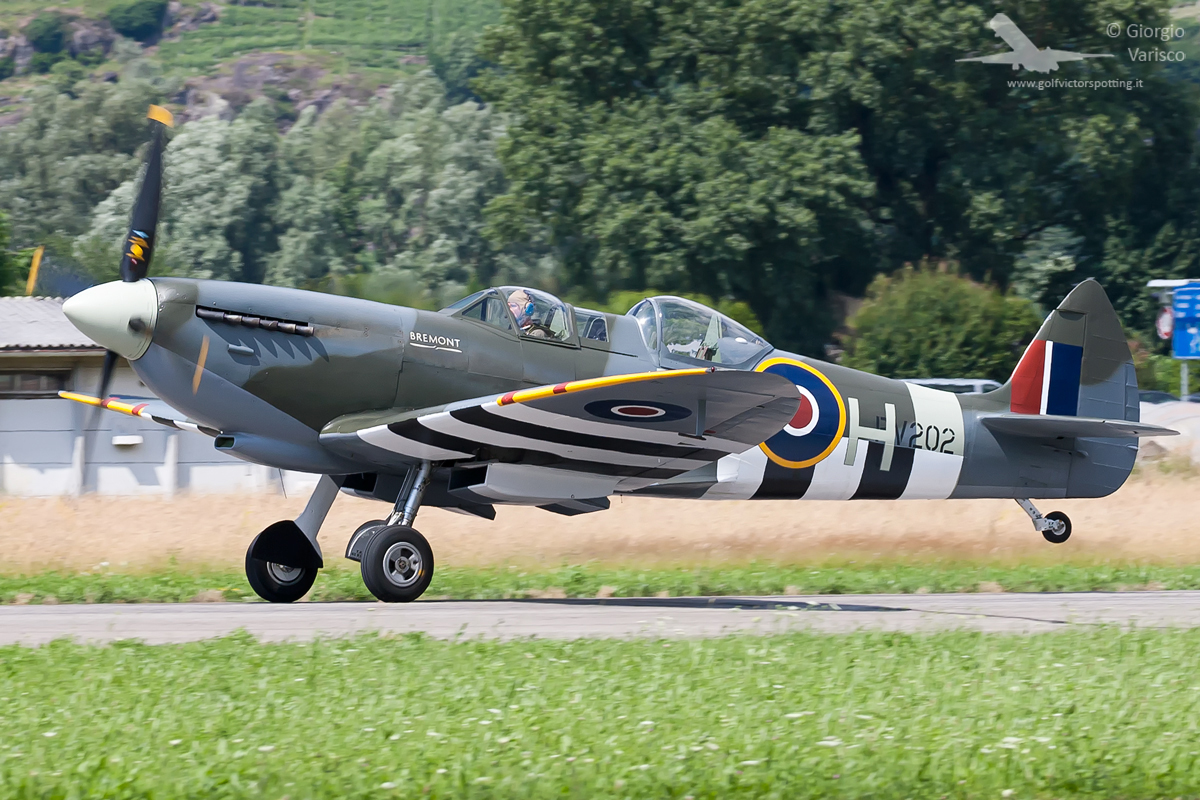