The first Annual Atlanta Warbird Weekend (AWW) will take place over the weekend of September 27th/28th this year in Atlanta, Georgia at Peachtree-Dekalb Airport (KPDK). The event is dedicated to the remembrance and celebration of the men, women and machines of the Greatest Generation. In metro Atlanta, there are significant historical aviation resources, and AWW aspires to be the catalyst to bring together the organizations, aircraft and people that keep this history alive, and so engage the public and businesses to preserve the spirit of our shared past.

The Commemorative Air Force’s Boeing B-17G Flying Fortress known as “Sentimental Journey” will lead a flight of vintage World War II aircraft to Peachtree-Dekalb Airport (KPDK) to inaugurate the Atlanta Warbird Weekend.  Cockpit tours and flights will be available in the B-17 and other aircraft, including a P-51 Mustang and SBD Dauntless dive bomber. 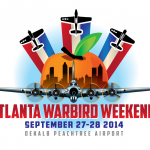 The Atlanta Warbird Weekend is a first-time project between two Wings of the Commemorative Air Force (CAF); Airbase Arizona and the Peachtree City, GA based Dixie Wing. Jay Bess, the CAF Dixie Wing’s Marketing Officer and a program coordinator described   Atlanta Warbird Weekend’s purpose as follows: “Our goals are to teach World War II history, increase awareness of the Commemorative Air Force in Atlanta, and raise much needed funds for the restoration, maintenance and operation of these aircraft.  These aircraft bring history alive in a way a textbook or video never will.” Veterans groups and educational displays will also be on hand at the show to help flesh out the historical context of the aircraft and their stories.

Peachtree-Dekalb Airport will be the premiere location for this event, and will include businesses located on the field as well as the 57th Fighter Group Restaurant. The airport was originally part of Camp Gordon, a World War I era training camp. In 1940, the U.S. Government authorized construction of a military airfield at the site. The airfield began operations on March 22, 1941 as Naval Air Station Atlanta. It has the history, and the perfect location for North Atlanta families, along with easy access to all major autoroutes. The 57th Fighter Group Restaurant is a WWII fighter-pilots-themed restaurant owned by Georgia Aviation Hall of Fame recipient, Mr. Pat Epps. It is located adjacent to airport property, is capable of hosting aircraft, and can accommodate the “Dinner with Eagles” symposium.

Joining “Sentimental Journey” will be a North America P-51D Mustang, considered by many historians to be the best all-round fighter, and premier bomber escort of the Second World War. A ride in a Flying Fortress or Mustang is a life-long dream for many aviation and history enthusiasts.  The B-17 and P-51 are often remembered as stable mates, with bomber crews nicknaming the protecting fighters “Little Friends”.  Fighter pilots in turn referred to the bombers as “Big Friends”. As such, the air show organizers will also host the “Big Friends, Little Friends” Dinner & Symposium at the 57th Fighter Group Restaurant on Saturday evening. Noted author and historian, Bruce Gamble will give a presentation on the B-17, and moderate a bomber and fighter pilot panel discussion.

“Sentimental Journey” has been continuously flown since it was manufactured in 1944, performing missions from military reconnaissance to drone “mother ship” during nuclear testing, and later, firefighting during its civilian working life, before retiring after nearly four decades of service. In 1978, the Fortress’s owners donated her to the CAF’s Arizona Wing (as it was then known), based in Mesa, Arizona.  Volunteers meticulously restored the Flying Fortress to full military specifications, painting the B-17 in the markings of the 457th Bomb Group as a tribute to all aircrew who served during WWII. The aircraft also features artwork recreating a classic Betty Grable pin-up photo well known to GIs, sailors and Marines of The Greatest Generation. A local media contest chose the name “Sentimental Journey” for the Fort’ from over eight hundred entries. “Sentimental Journey” has been touring North America since the early 1980s and makes sixty stops annually, but even so, 2014 will mark the B-17’s first trip to Georgia since 1999.

As she tours across the country, it’s possible for the public to ride in the aircraft for a “small” donation. An unforgettable flight inside “Sentimental Journey” can be yours for just $425 per person. For flight reservations, register online at www.atlantawarbirdweekend.com.  Cockpit tours are only $5; ground viewing and photo opportunities are free to the visiting public from 9 a.m. to 5 p.m. each day over the weekend of September 27th/28th.