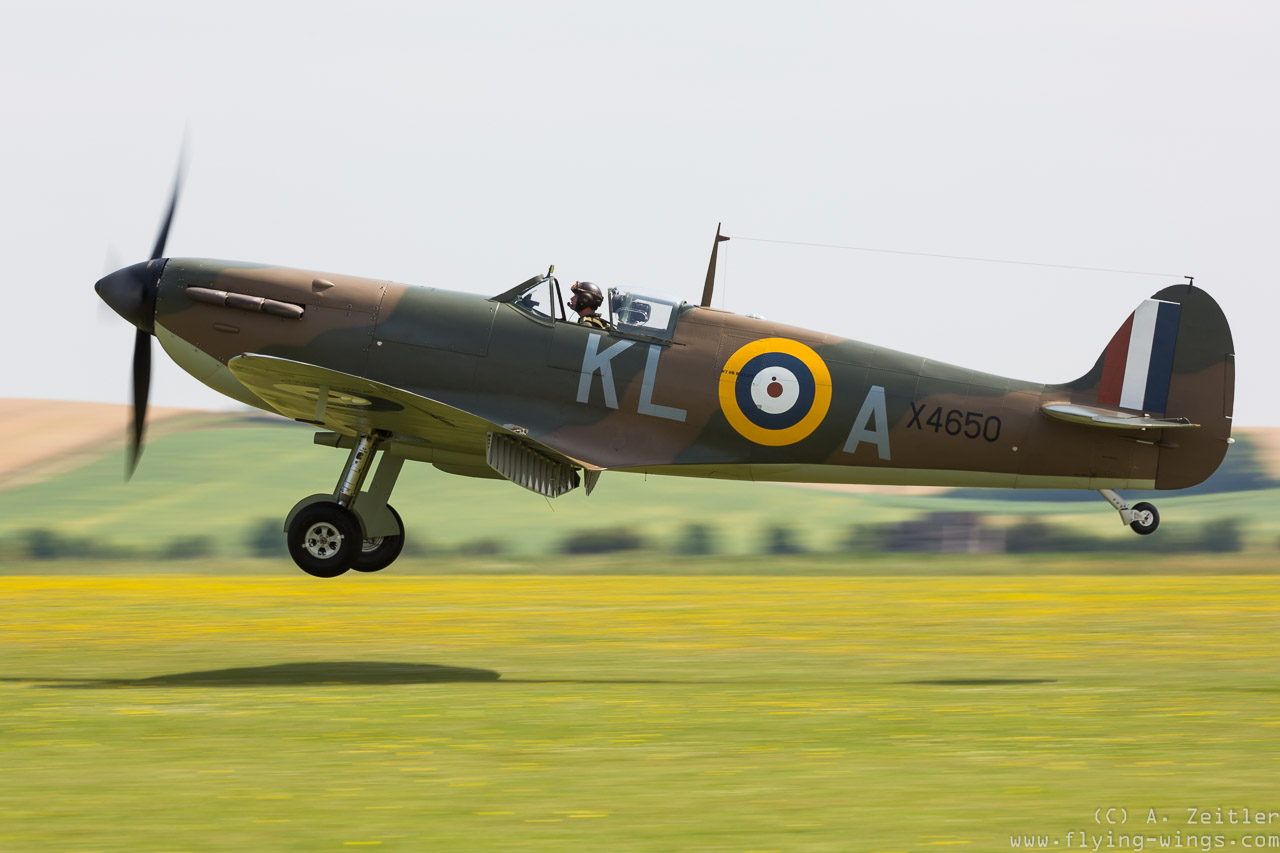 Standing at any of the runway ends during the Duxford air shows is a stunning experience. Either you get to see the aircraft turning in onto the display line or they make you feel their massive horse powers while passing you on take-off. Action is guaranteed! If you look around the airfield there are enough warbirds to fill a whole show, but Stephen Grey and The Fighter Collection always make sure there is icing on the cake, and invite several warbirds from far off lands to compile a nicely themed flying program during the afternoon.
This year’s edition did look very promising, however unfortunately several of the planned attendees couldn’t make it to Duxford due to very bad weather in continental Europe. Thus the show did lack the Ju-52 formation as the Lufthansa example and the “Tante Ju” from La Ferté-Alais, France, could not make it over. This was also the case for a Spitfire, Mustang and Corsair from Max Alpha Aviation/Meiermotors in Germany.

A safer way to arrive was thus via ground, carefully packed inside a shipping container. This was the case for the two star attractions at this year’s show: Steve Hinton, who has close relationships at Duxford and is a regular visitor/performer during the show, was gracious enough to bring the world’s sole airworthy Boeing P-26 Peashooter from the Planes of Fame air museum in Chino, California. It did perform during Saturday’s show, but due to unfavorable crosswind conditions, had to stay on the ground for Sunday. Another new addition to the sky was TFC’s splendid Curtiss P-40C Warhawk. It was flying in the US last year, but finally arrived in the UK more recently. As became obvious during the show, the bare metal scheme looked especially good and not just in a clear Califorian sky, but also in front of some British clouds. 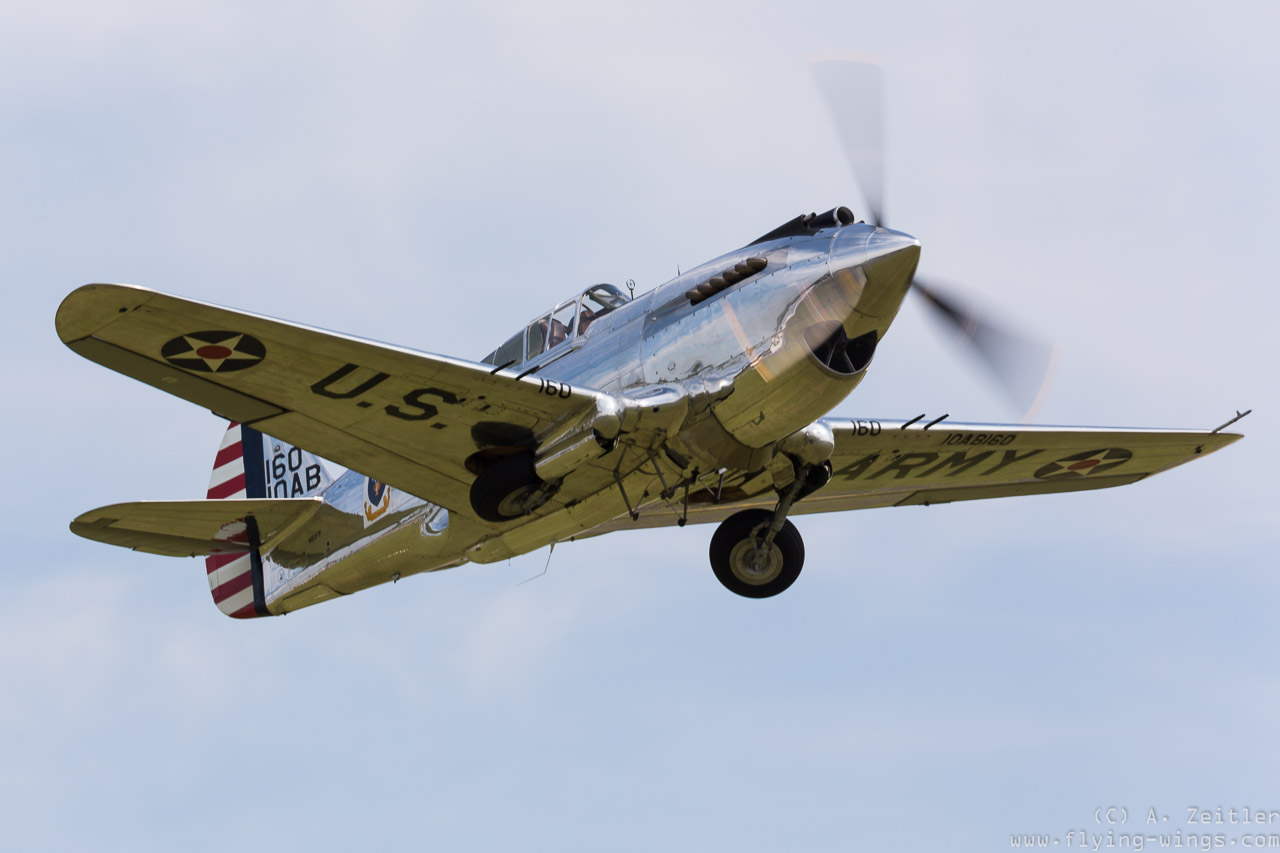 Apart from those two highlights it was business as usual at Flying Legends, with numerous warbirds in the air at any time during the roughly four hour display. It kicked off well with eleven Spitfires accelerating down the runway, and gathering for some formation flights. Within this formation was a special highlight: four airworthy Spitfire Mk.Is. They were especially celebrated in a sole four-ship formation before the tail chase of the remaining Spitfires began.This started a continuos flow of piston engine-only flying displays, usually commencing with a formation fly-by before starting individual routines. Amongst them was a sight not seen for a long time; a four-ship Navy fighter formation, consisting of a Corsair and three Grumman ‘Cats: a Wildcat, Bearcat and Hellcat.

Also, the Battle of Britain Memorial Flight came over from their home base at Conningsby to show their Lancaster, Spitfire and Hurricane which both flew in formation and as individual solos. Later on two P-51 Mustangs “fought” against two Hispano Buchons, and the crowd was treated with the unique sight of two airworthy Gloster Gladiators flying together. And looking to the big birds; Europe’s only flying B-17 Flying Fortress “Sally B” flew, and in a first for Duxford this year, the sleek and elegant lines of the Breitling Super Constellation from Switzerland could be admired on the ground and in the air. Also, after being present with the P-38 Lightning and F4U-4 Corsair in previous years, the “Flying Bulls” from Salzburg, Austria, presented their B-25 Mitchell for the first time at “Flying Legends”.

As the weather continuously improved on Saturday some more aircraft arrived; amongst them the warmly-welcomed Hurricane from France. It displayed on Sunday, making it the only Hurricane display this year other than the BBMF’s example. This did fill up the gaps in the flight line a bit during a show, but unfortunately the inclement weather did dampen some expectations. However, it was once again was a great celebration of piston engine power, and even for the regular visitors to this event, it was proved again that you just cannot go wrong attending Flying Legends!